Some answers from an atmospheric scientist 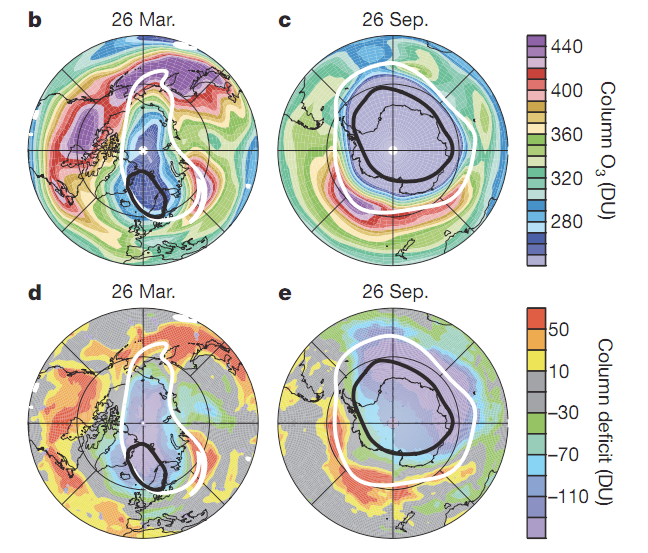 A prolonged chill in the atmosphere high above the Arctic last winter led to a mobile, morphing hole in the ozone layer, scientists report in a new paper. It’s just like the South Pole hole we all studied in school, but potentially more harmful to humans — more of us live at northern latitudes. Here are five things you need to know about it.

1: THIS IS A NEW PROBLEM

Most of the public probably knows about the infamous ozone hole over the South Pole, which became one of the great environmental recovery efforts of the 1980s. The Arctic loses some ozone every year, too, but not like this, said Gloria Manney, who works at NASA’s Jet Propulsion Laboratory and the New Mexico Institute of Mining and Technology in Socorro.

“No previous year rivals 2011, when the evolution of Arctic ozone more closely followed that typical of the Antarctic,” Manney and colleagues write in the Oct. 2 online issue of Nature. For the first time, the Arctic loss was enough to be considered a hole.

Both holes are driven by chemical reactions involving chlorine. In cold air and sunlight, chlorine is converted into compounds that break down ozone (itself a harmful substance at the surface, but a protective one at stratospheric altitudes). Antarctica experiences an annual ozone hole as a result. The Arctic is cold, too, but usually not as cold as the Antarctic, and not for as long. But winter 2010-2011 was different. Scientists aren’t sure why.

“The processes that control temperatures in the stratosphere in the winter are so complex; it depends on various factors,” Manney said in an interview. “In December, we couldn’t have told you we were going to have this unusually long cold period.”

2: IT COULD HAPPEN AGAIN

Without ozone, more radiation would get through to interfere with our DNA, and that of other life forms on Earth.The planet’s climate is an extremely complex system, so it’s hard to say what will happen if global surface temperatures rise as expected. But it’s generally accepted that an increase in surface temperatures will translate to a chill in the upper atmosphere, Manney said. So as the Arctic loses more of its ice sheet in the summer, the air will get even colder up above, meaning more of the chlorine reactions will take place.

“If the stratosphere cools as a result of the changing climate, we might see severe ozone depletion more often in the future,” she said.

Humans have already emitted enough chemicals to seed the process. The Montreal Protocol, which took effect in 1989, prohibits production of chemicals involved in ozone destruction. But human activity belched out plenty of those chemicals before international governments ever started noticing, let alone signing treaties. There’s still enough in the atmosphere for this effect to persist for decades, Manney said.

The air over the Arctic is extremely mobile and turbulent, forming a vortex that covers the entire region. It’s a massive area, equivalent to maybe five Californias, and it churns and moves about the Arctic Circle. In April 2011, the vortex — and the hole — moved over northern Russia and Mongolia, Manney said. The climate-monitoring scientists didn’t notice it at the time, but ground-level ultraviolet radiation monitors started to spike.

The ozone layer’s main utility is in protecting Earth from the sun’s UV rays. Without ozone, more radiation would get through to interfere with our DNA, and that of other life forms on Earth. A mobile ozone hole in the northern latitudes thus poses a risk to lots of people.

International groups of scientists monitor the Arctic with a suite of Earth-observing satellites, balloons, ground stations and more. But some of their instruments, especially the satellites, are not designed to last for much longer. The instruments onboard NASA’s Aura spacecraft, whose trace gas and cloud measurements were key to this study, were designed to last about 5 years and they’re now about 7, Manney said.

And as we’ve seen before, it’s tough to get a polar-observing satellite approved.

“There aren’t immediate plans for other satellites that give us the same kind of comprehensive measurements. So it is a concern as to whether and how much capability we’ll have to monitor not just ozone, but the other chemicals that contribute to destroying ozone,” Manney said.

… AND NOW FOR SOME GOOD NEWS

Combating greenhouse gas emissions and reversing global warming will help — if surface temps don’t rise dramatically, the stratosphere may not cool dramatically, and the chemical reactions that cause ozone depletion may not occur over the Arctic. What’s more, humans have already made some progress with the Montreal Protocol, Manney said.

“Having done that, we expect that we are now on a path to where eventually, in several decades, we will stop having enough chlorine to form ozone holes,” she said. “And things we might be able to do to mitigate climate change would also decrease our odds of seeing more severe future ozone loss.”

As a scientist, Manney wouldn’t speculate about other possible solutions — like geoengineering or cloud-seeding projects that would warm up the stratosphere and prevent more ozone depletion, which we’ll just go ahead and throw out there. But she does believe with better data and better models, she and others will eventually be able to predict where and when it happens, leading to better warning systems for people on the ground.

“There is the possibility of saying, ‘We’ve had severe ozone loss this winter, and the ozone vortex is expected to be here [in Russia or elsewhere], so you guys should put your sunscreen on,'” she said.