The Iguana 29: A Speed Boat That Morphs Into a Tank-Tracked Beach Lander

Amphibious vehicle designs always sounds great on paper, but in practical use they tend to sink more often than swim.... 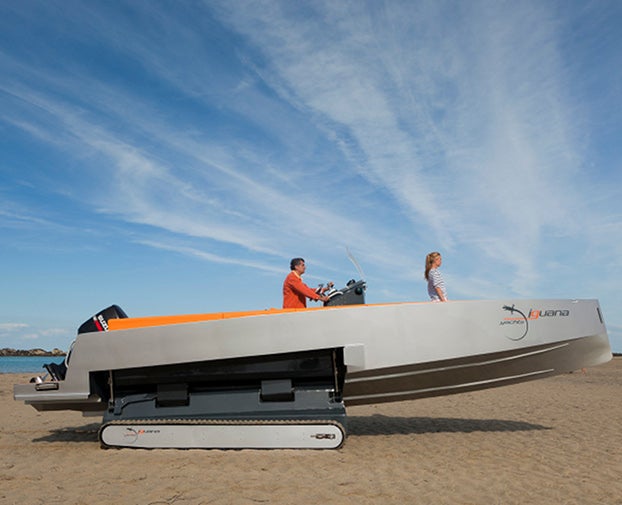 Amphibious vehicle designs always sounds great on paper, but in practical use they tend to sink more often than swim. It’s not so much that they don’t work, but that they tend to handle either land or water well, with the other being an afterthought (not to mention they solve a problem that most people simply don’t have). But we’d be lying if we said the Iguana 29 didn’t catch our eyes this afternoon.

Like the aforementioned amphibious craft, the Iguana 29 is suited more for the water. It’s a 29-foot speed boat with a 35-knot top speed over water and seating capacity for up to ten. But closer to land it can deploy retractable caterpillar tracks that can carry it across dry ground at up to five miles per hour. That’s not very fast, but that’s not why the Iguana 29 is cool.

It’s cool because, at least by all appearances (and you can see it make the water/land transition in the video below) its tank-style treads are actually decent at negotiating off-road terrain. In the kinds of environments where an amphibious vehicle actually makes sense–a beach during low tide, a sandbar in shallow water, etc.–the Iguana looks right at home. It lacks the complexity of something like a hovercraft (remember that brief period where we all thought we were going to own hovercraft?) and the bulky slowness of one of those duck boats you see driving around Boston or Key West or wherever tourists go on those amphibious tours.

In other words, it’s less an “amphibious vehicle” and more a decent watercraft that can effectively handle dry land conditions when necessary–ostensibly a pretty good thing to have around if you’re living in an area with wildly varying tidal conditions or doing a lot of island hopping or cross-bay traversing. And all you need is €280,000 to get on board.