Rescue workers may soon have a new tool to locate victims amid the blinding smoke and chaotic flames of a house fire. 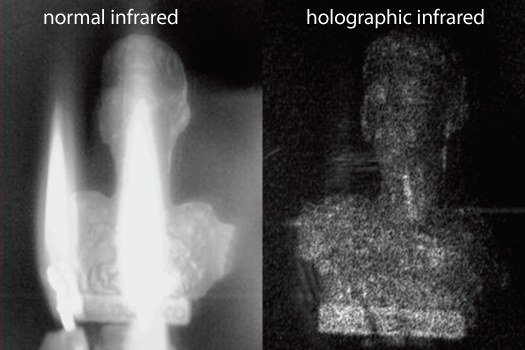 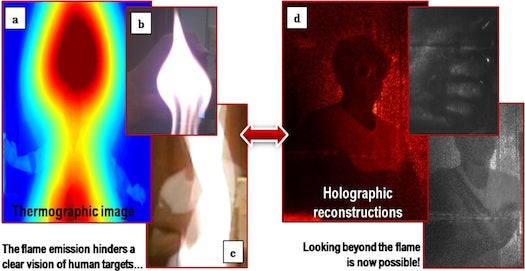 When firefighters go looking for victims trapped inside a burning building, they often encounter rooms and hallways filled with thick, blinding smoke. If no flames are present, a rescuer can use an infrared camera to spot the heat signatures of warm, living bodies. But in the midst of a raging inferno, heat from the flames will overwhelm the camera’s sensors and obscure nearby objects.

Researchers in Italy may have found a solution: a digital imaging system that captures infrared signals in 3-D and converts them to holographic video in real-time, thus allowing firefighters to distinguish flames from heat-emitting objects behind them.

Here’s a demonstration video the researchers made to show the system in action (right), compared with a standard infrared camera (left):

The imaging system generates video using the basic principles of holography, which are explained nicely in a press release accompanying the study:

The researcher used an infrared laser, which sends out longer wavelengths of light than a laser operating in the visible spectrum, for two reasons: first, visible light can’t penetrate a smoke-filled room, while infrared light gets through with little scattering; second, laser beams of longer wavelength recombine to form a larger interference pattern, allowing the system to generate large, human-size holograms.

In order to turn a single static into a video, the infrared laser sends out repeated, pulsed beams. Each pulsed beam recombines to form a new 3-D image.

The imaging system would be a major improvement to regular infrared cameras, but before it’s ready for action, the researchers need to figure out a way to combine the laser source and camera into a single set-up.