Rapyuta, the cloud for robots, is now online. 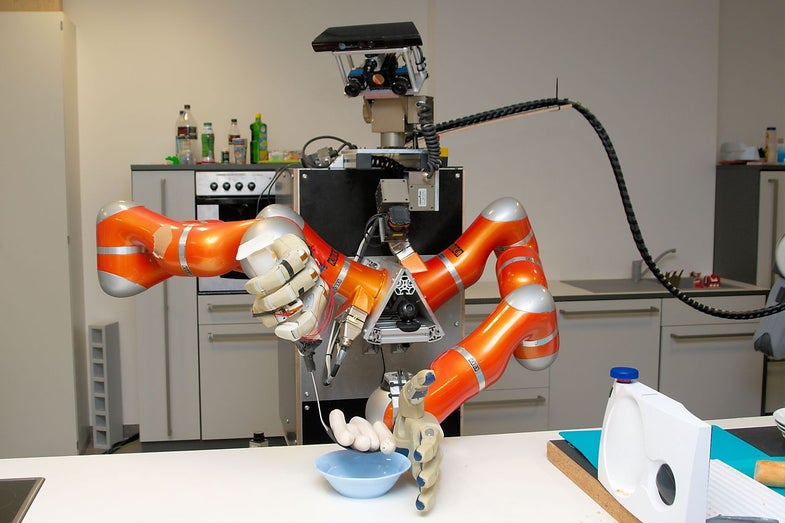 Rosie the robot waits for the sausages to be cooked before taking them out of the water and serving them. TUM
SHARE

Robbie the robot is intimidated by breakfast. What the heck is a quiche? Why are all the cereal boxes different sizes? It takes him ages to do his only task, setting the table, because he has to adapt to so many new and varied situations that humans can analyze in a split second.

Since late 2009, a group of European researchers from five different labs have been working on RoboEarth, “a World Wide Web for robots.” It stores data remotely so that robots can process information uploaded by other robots. It’s not just touchy-feely robot love: storing data within a robot-accessible cloud could speed up complicated computation processes.

Now they’ve turned on Rapyuta, the RoboEarth Cloud Engine, the ultimate open-source robotics platform. It’s a network (named for the robot-inhabited castle in Miyazaki’s Castle In The Sky) that allows robots to move their heavy computation into the cloud, decreasing the need for on-board computation.

It catalogs descriptions of situations and objects that robots have encountered so that every robot doesn’t have to build up knowledge from the ground up of how to do things like navigate a room or fold clothing. A hospital robot could upload its floor map so that the robo-cleaner would know where to vacuum, for example.

Because it takes a lot of computing power just to let a robot move around, Rapyuta may prove especially efficient for drones and self-driving cars, project leader Mohanarajah Gajamohan told the BBC. Moving computation into the cloud could make robots cheaper and longer-running and more mobile.