An unassuming-looking old car powered not by gas, but by coffee, recently broke the land speed record for a vehicle... 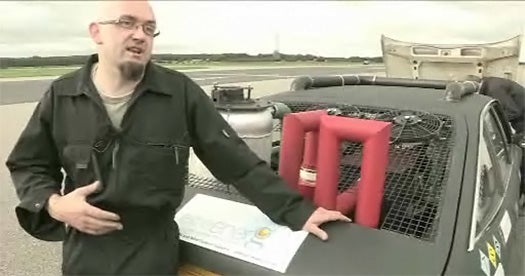 An unassuming-looking old car powered not by gas, but by coffee, recently broke the land speed record for a vehicle powered by gasification, clocking in at a cool 66.5 miles per hour on average. Gasification works by introducing oxygen or steam to an organic, carbon-based material (such as coffee beans, in this case) and increasing the temperature until a synthetic gas made of carbon monoxide, carbon dioxide, hydrogen and methane is created and burned up by a regular internal combustion engine.

The Coffee Car, originally built by British engineers for the BBC show Bang Goes the Theory, already holds a world record, for longest journey by a coffee-powered car (over 200 miles), and now the second generation has proven itself on the speed front as well. The previous record, held by Americans, was just 47 mph, and the car was fueled by wood chips. In this case, it looks like coffee, the same sweet nectar that gives so many working men and women around the world the energy to go the distance, has proven superior once again.

Get acquainted with the Coffee Car in the video below, or check out the record-breaking drive over at the BBC.