A dog-powered car, a plastic bike sail, and a merry-go-round rowing machine are just a few of the quirkier inventions documented in PopSci's archives 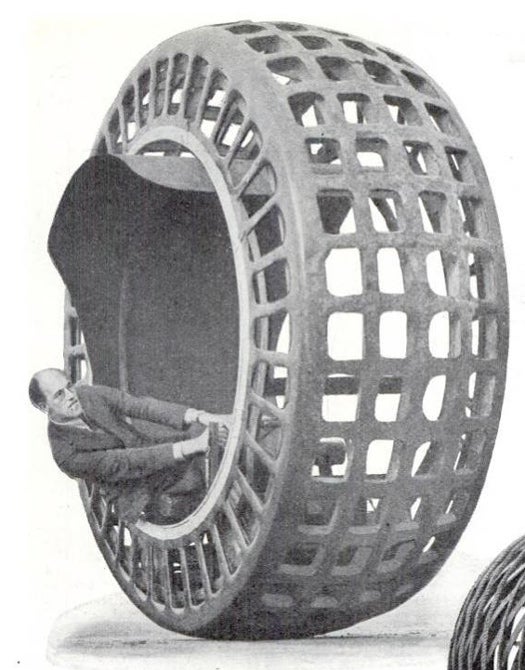 Inventor J.H. Purves imagined that droves of his electrically-driven unicycle would roll like tumbleweeds alongside more conventional vehicles. To steer the "dynasphere," drivers would sit in an enclosed cabin that would remain still while the wheel spun around it. Read the full story in "Amazing Motor-Driven Hoop May Be Car of the Future.
SHARE

Every June, we announce PopSci’s chosen Inventions of the Year, our favorites among the brainchildren of garage tinkerers. Who knew that you could make a fish-friendly tidal turbine or a hearing aid that uses bones to conduct sound?

At PopSci, we’re eager to recognize the potential in these inventions, but only time will tell which ones will become ubiquitous and which ones will be forgotten. For every television, radio, and Post-It Note, there’ve been half a dozen whosits and whatsits that faded into obscurity.

Of course, thanks to our 138-year online archive, no invention that ever graced our magazine’s pages has ever really been forgotten. For every sports car and newfangled smartphone we’ve covered, there’s been a dog-powered car, a self-administering gas dispenser, and a 10-foot submarine. Hell, many of them could use a comeback, if only for novelty’s sake.

Click through our latest archive gallery to see our favorite quirky inventions from the past 138 years.

Iron Dynasphere, Car of the Future: May 1932

Inventor J.H. Purves imagined that droves of his electrically-driven unicycle would roll like tumbleweeds alongside more conventional vehicles. To steer the “dynasphere,” drivers would sit in an enclosed cabin that would remain still while the wheel spun around it. Read the full story in “Amazing Motor-Driven Hoop May Be Car of the Future 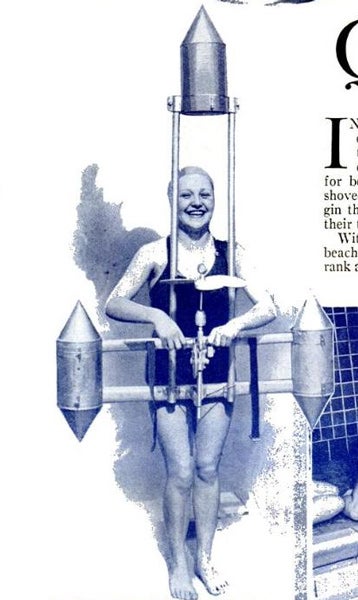 Thanks to the growing affordability of cars, more Americans than ever before had access to pools, beaches, and swimming holes. Concerned that the average person couldn’t actually swim, inventors developed scores of strange devices to help people develop their form and stay afloat. Pictured left are a pair of flotation devices with propellers attached to them. Read the full story in “Queer Machines Train Swimmers” 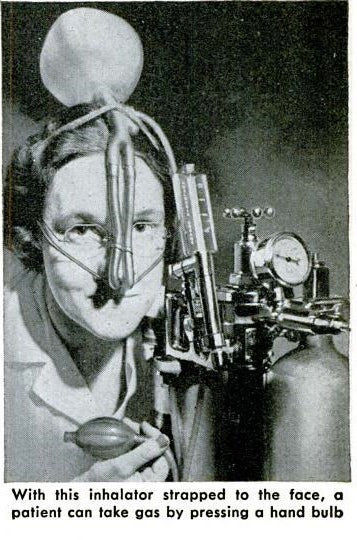 This device would have allowed dental patients to administer painkilling gas to themselves while the dentists worked on their teeth. Patients needed only to squeeze the bulb to release a hefty dose of nitrous oxide from the cylinder attached to their heads. Multi-tasking for the win? Read the full story in “Dental Patients Can Give Themselves Gas” 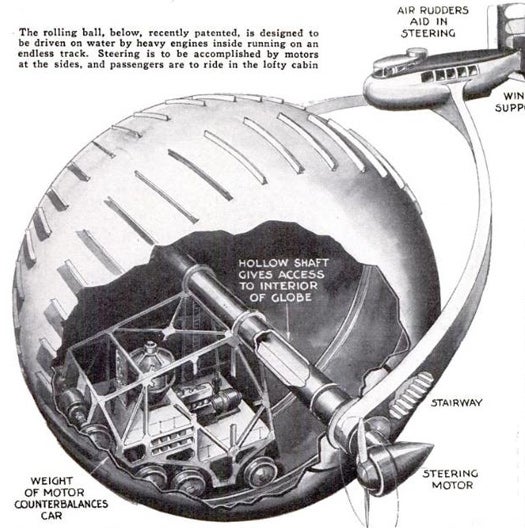 The Future of Cruise Ships: September 1933

Ships engineered to roll like wheels across the Atlantic were all the rage during the early 20th century. The vehicle picture left, called “the rolling ball,” actually received a patent in the early 1930s. The ship ran on diesel-electric engines spinning within the ball, while passengers sat comfortably in the airplane-like car above. Read the full story in “Freak Vehicles for Air, Land, and Water” 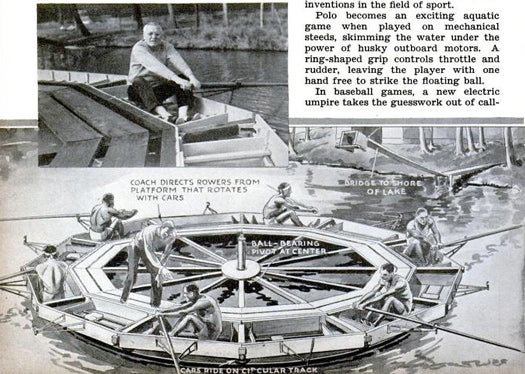 In Asheville, N.C., a merry-go-round rowing machine (or twelve boats attached to a revolving platform) trained crews that did not have access to adequate practice waters. Read the full story in “New Inventions in the Field of Sports” 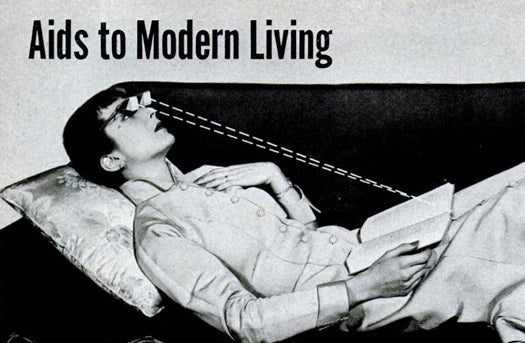 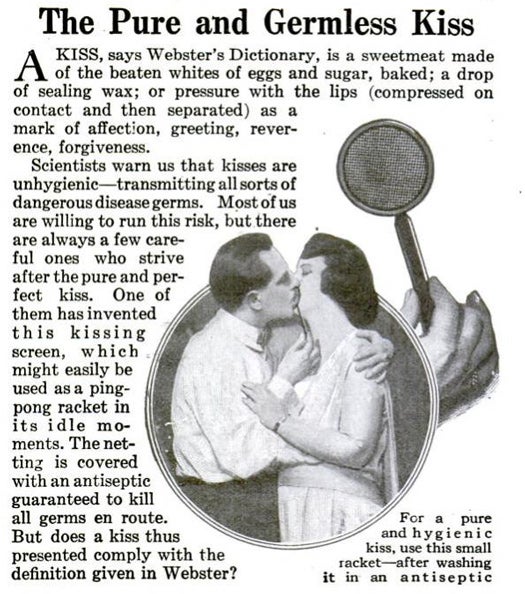 We can’t imagine why this device never took off…. Read the full story in “The Pure and Germless Kiss” 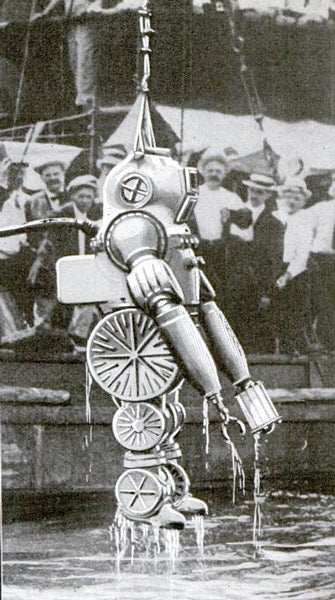 Researchers and engineers at the British Admiralty developed this steampunk-esque “diving armor” to withstand deep-sea pressure. Since the armor restricted the wearer’s movements, he had to be hoisted to the surface by a derrick. As a bonus, this particular suit had an artificial claw attached at the arm. Read the full story in “In the Grip of the Deep” 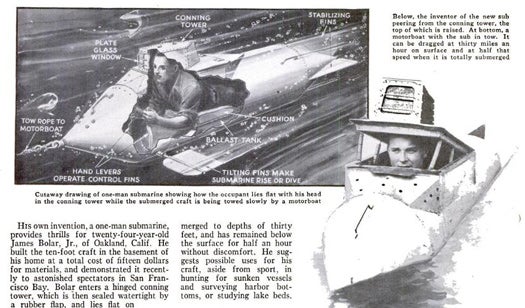 At age 24, James Bolar, Jr., invented his one-man submarine in the basement of his home. He later demonstrated the 10-foot vehicle to audiences in San Francisco Bay. His sub could stay submerged at 30 feet for half an hour at a time. Read the full story in “Inventor Gets Thrill in Homemade Submarine” 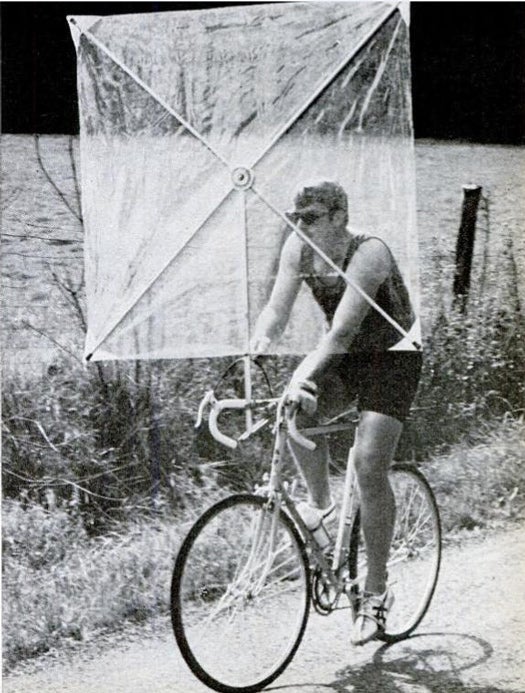 This plastic and aluminum sail could supposedly increase your bike speed by at least 20 miles an hour. Read the full story in “What’s New: Bike Sail” 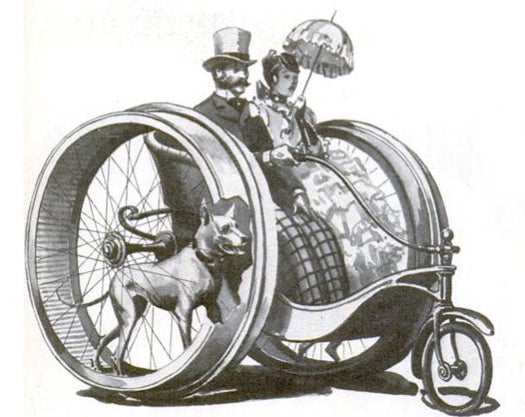 We couldn’t resist including the Cynsophere, which was designed by a French engineer in the 1880s. While the dogs powered the wheels, hamster-style, the operator relaxed on a cushy seat. Sure, the device looks cruel, but the French Society for the Prevention of Cruelty to Animals approved, while we suggested that drivers “exhibit food or even a cat on special occasion.” Read the full story in “Freak Vehicles for Air, Land, and Water”
archive gallery
archives
Cars
Gadgets
inventions