Archive Gallery: A Century of Aviation, From the Wright Brothers to Stealth

In just over 100 years, we've gone from the first powered flight to a scramjet capable of Mach 6. Amazing.

Earlier this week, the Air Force announced that the X-51 WaveRider, a wingless scramjet, would make its first hypersonic flight. After learning that the scramjet would reach Mach 6, we couldn’t help but reflect on the progress aviation has made in just a century. We’ve combed the archives to build just one of many amazing snapshots of these incredible 100 years.

On December 17, 1903, the Wright Brothers embarked on the first sustained, heavier-than-air, man-powered flight aboard the Wright Flyer. Although they made history that day at Kitty Hawk, people were skeptical of aviation technology’s potential. An article we published in March 1904 examined what the brothers’ feat meant for aviation before concluding that the machines would never develop into commercial carriers. “To say nothing of the danger, the sizes must remain small and the passengers few….navigable balloons and flying machines will constitute a great mechanical triumph for man, but they will not materially upset existing conditions as has sometimes been predicted.”

Well, shame on us, because just over a hundred years later, we’re launching wingless jets and maneuvering zombie satellites. There’s even talk of an electric tethered hovering platform.

Of course, the progression we’ve made in aviation was largely a matter of trial and error. For every legendary fighter jet that soared, there was a sausage plane or a zeppelin that went under. Still, as the content our archives will attest, a little imagination and perseverance went a long way.

Click through the gallery for our favorite airplanes, airships, flying boats, and spaceships. 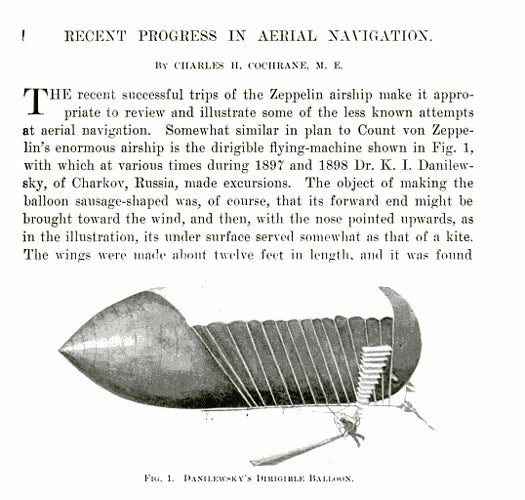 The Sausage Balloon and Other Early Flying Machines: April 1901

Two years before the Wright Brothers made history at Kitty Hawk, N.C., we covered experimental airplanes prevalent in the late 1800s. Early machines included the the sausage-shaped dirigible balloon, pictured left, and the sky-cycle, which resembled a bicycle strung on a parachute. 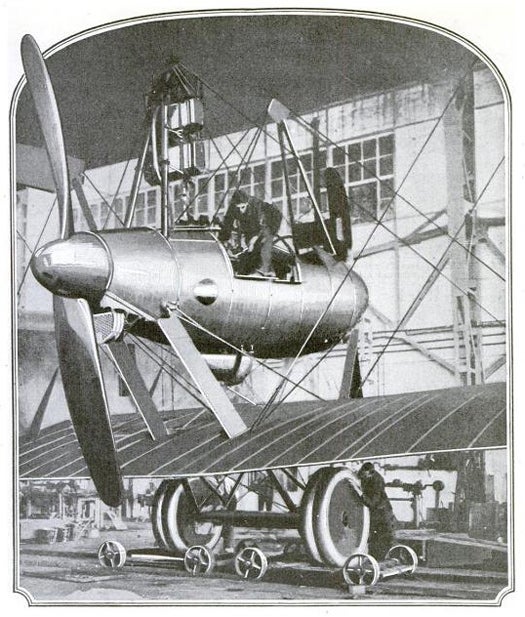 Around the turn of the 20th century, airplanes were little more than oversized box kites. Naturally, we were eager to cover the Aviatik, which not only looked more like the “giants of the air” that people imagined, but that was the largest airplane at the time. The plane had a wingspan of 400 feet, and could carry 22 passengers plus baggage. 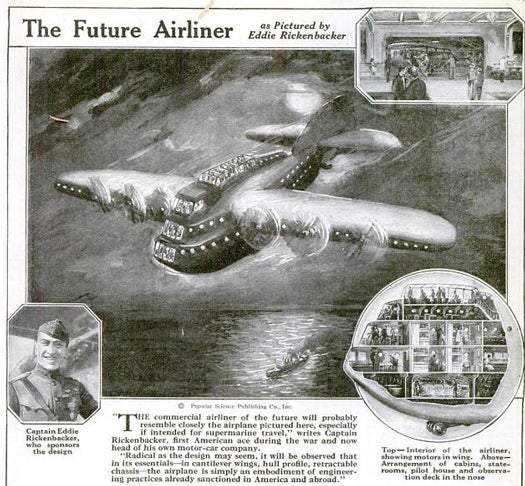 Eddie Rickenbacker, an American fighter pilot during the two world wars, speculated that the future commercial airliner would be capable of landing on land and water. His “superliner of the skies” would also contain cabins resembling those on a luxury cruise ship. Fancy!

Gianni Caproni, an Italian aeronatuical engineer, and founder of the Caproni aircraft company, built a “flying-ship” designed to cross the Atlantic in less than a day. The vehicle, which could hold a hundred passengers, was powered by nine planes and eight engines.

Although he is best known as telephone’s inventor, Alexander Graham Bell was also a prominent aerospace visionary. His work with tetrahedral kites led to the development of this flying machine a few years before 1910. Anticlimactically enough, the airplane failed to leave the ground. 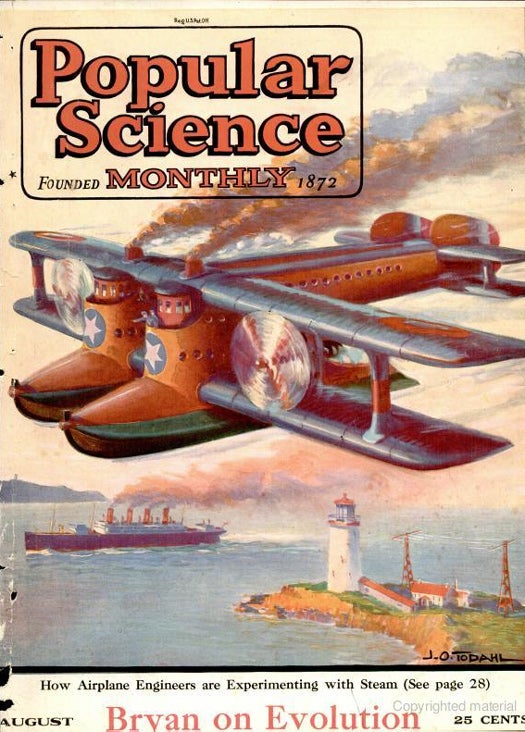 Although airplanes had come a long way since the Wright Flyer, American engineers were still frustrated at the fickleness of the planes’ internal combustion engine. We looked at a German-developed, steam-propelled airplane as a possible model for improvement of our technology. 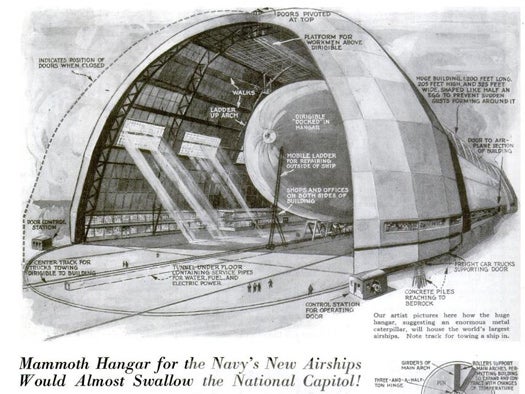 A Home for Zeppelins: September 1929

In 1929, we were on the cusp of the golden age of Zeppelins. The Goodyear-Zeppelin Corporation planned massive, stretchy hangar in preparation for construction of the Navy’s two airships, the ZRS-4 and the ZRS-5. Both helium-powered airships were to have integrated gun openings. 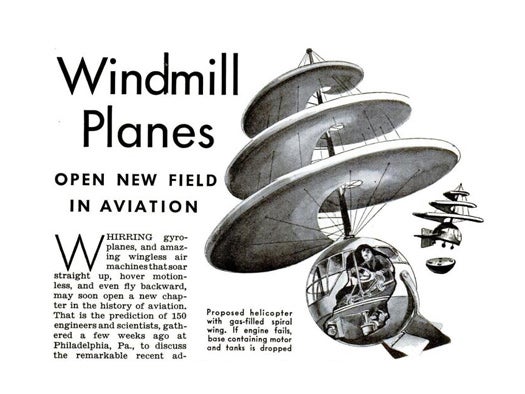 Thrilled by the helicopter’s recent debut, Engineers gathered in Philadelphia predicted that “wirligigs” would become standard aircraft for the Army, Navy, and the Coast Guard, among other agencies. 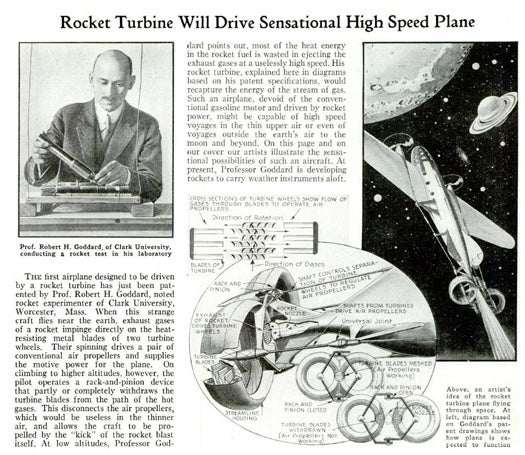 After Professor Robert H. Goddard patented the first rocket-powered airplane, we couldn’t help but imagine how it would take us beyond the skies to outer space.

World War II saw massive production and progression of aircraft. Here, we compared Germany’s Messerschmitt ME-109 to the Allied planes, America’s P-40 and the British Spitfire. 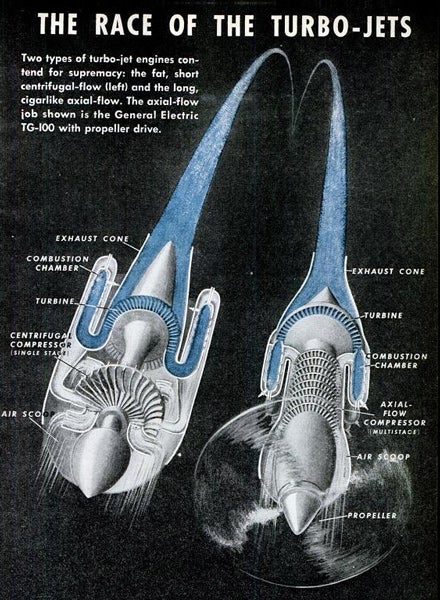 The Race of the Turbo-Jets: December 1945

The invention of jet propulsion was such a celebrated achievement that we declared May 14, 1941, as the second most important date in aviation history, after December 1903, the Wright Brothers’ first flight. 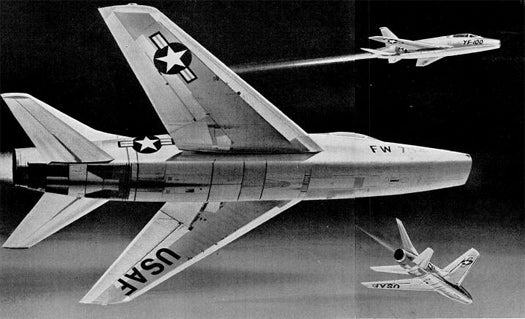 The legendary century series–a group of high-performance planes that pushed aviation technology forward in the 1950s and ’60s, began with the F-100 Super Sabre–the first jet capable of supersonic level-flight cruising. It replaced the F-86 Sabre and flew extensively in Vietnam. 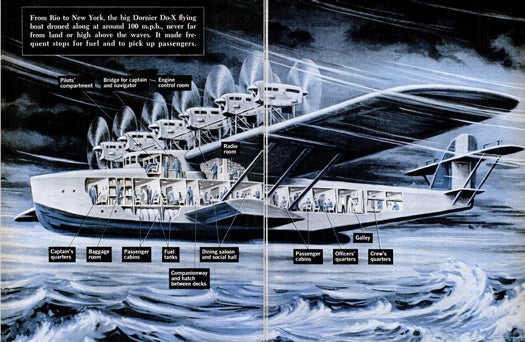 Although progression made in World War II rendered boat planes obsolete, Germany’s 52-ton Dornier Do-X still managed to make a splash during the early 1930s. Although people enjoyed the novelty and spectacle of a long-range flying boat, the slow-moving plane was simply too inefficient to sustain commercial interest, especially during Depression. 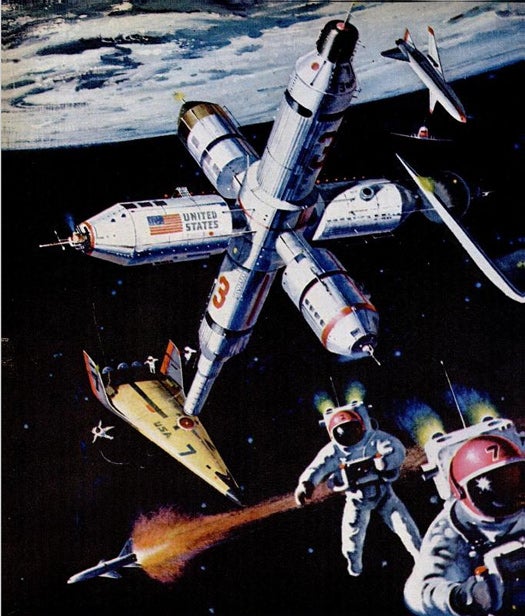 Lots of people dream or visiting outer space, but few people actually make it through astronaut training. With that in mind, Dr. Wernher von Braun, NASA Deputy Associate Administrator at the time, wrote an article for us in which he described a “spaceplane” that could accommodate the common man–concepts for which actually went on to inform the Space Shuttle which was still four years out. Refreshments in the back and low noise levels would make the flight experience similar to the one on an airplane. 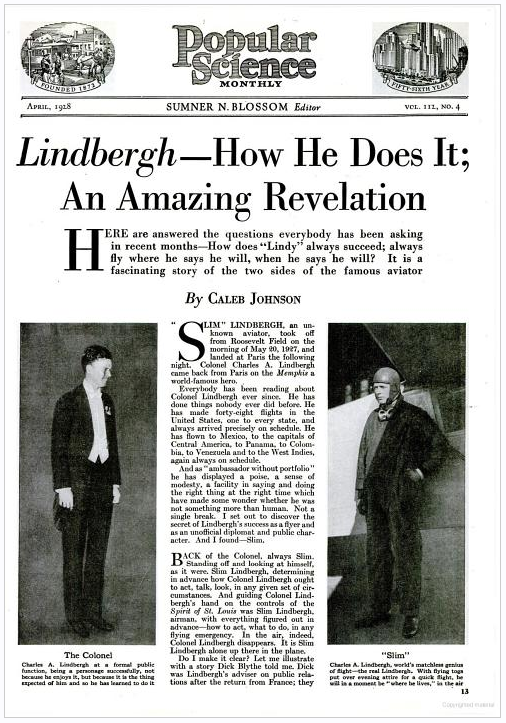 Less than a year after his historic trans-Atlantic flight, Charles Lindbergh had become one of the first truly modern international celebrities. In our April 1928 issue, we wrote what could now be deemed a puff piece on how Lindy splits his public and private life. It’s a fascinating portrait; what is the “amazing revelation” you may ask? You’ll have to find out just as our readers in 1928 did.

Just as we follow the A380 and 787 Dreamliner today, the first superjumbo airliner received our full attention in December 1969, just a month before taking its first commercial flight on Pan Am’s New York-London route. 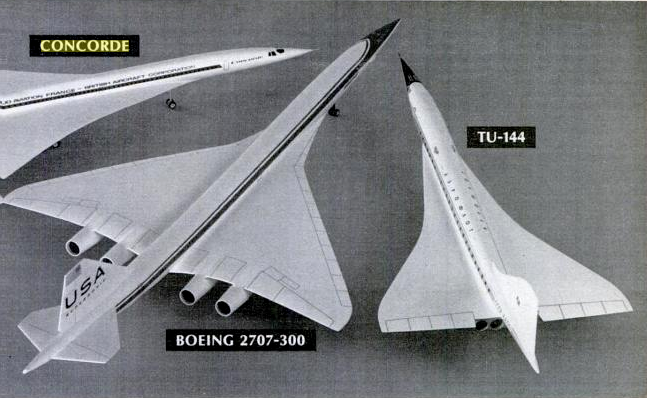 Chuck Yeager first broke the sound barrier in his rocket-powered X-1 in 1947, so it’s staggering to think that just 23 years later, we stood poised to take our leisure travel supersonic as well. In the summer of 1970, the SST race was three-way, with Russia’s Tu-144 and the still-on-the-drawing-boards Boeing 2707-300 joining the legendary Concorde. The Tu-144 flew just 55 passenger flights, and the Boeing didn’t reach the prototype phase–so we were right about the Concorde, which flew for BA and Air France until 2003. 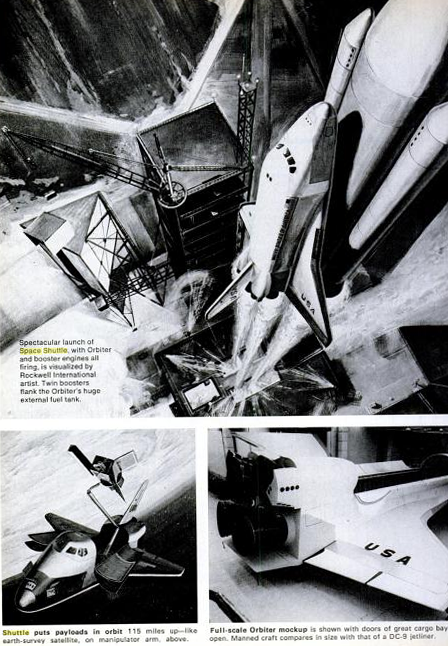 “If you think our space program is rapidly going out of style, you are wrong,” writes rocketry pioneer Wernher von Braun–a frequent contributor in the 1960s and ’70s–in November of 1974 upon the official unveiling of NASA’s shuttle concept. In our cover story, von Braun laid out the then-novel concept of a craft entering space like a rocket, then returning to Earth like a plane. 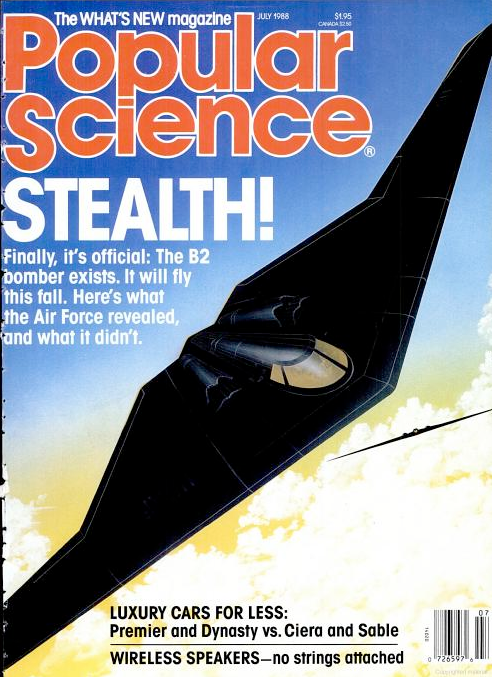 Long speculated in our pages in the months and years prior, the US Air Force took the wraps off its incredible flying-wing bomber. Typical of PopSci, we took the occasion to dive deeper into the B-2’s amazing tech, highlighting “what the Air Force isn’t saying” about its innovative engines and radar-absorbing profile. 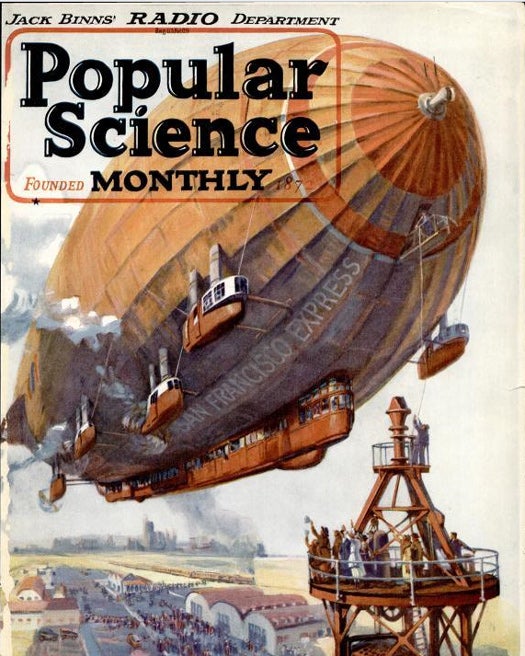 Despite the number of accidents befalling dirigibles in the early 1920s, the Navy went ahead with building three new airships for commercial purposes. While they envisioned people enjoying luxurious cabins and lovely views for years to come, zeppelins went out of style altogether after the Hindenberg went down in 1937.
airplanes
archives
helicopters
jets
Space