In the wake of the 1973 oil embargo, Detroit automakers tried to convince regular, non-truck-driving Americans to switch to diesel.... 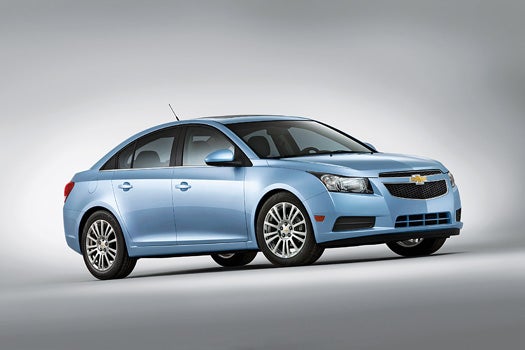 In the wake of the 1973 oil embargo, Detroit automakers tried to convince regular, non-truck-driving Americans to switch to diesel. Diesel engines, after all, burn fuel 30 percent more efficiently than gasoline engines. The carmakers failed, in part because of poor engineering: Between 1978 and 1985, General Motors’s Oldsmobile division produced a series of shoddy, failure-prone engines that gave diesel a bad reputation that persists to this day.

Now GM, compelled by increasingly stringent fuel-economy regulations, wants to bring diesel cars back to Detroit. In 2013, the compact Chevrolet Cruze is set to become Detroit’s first diesel passenger car since the 1980s. (And the Cruze isn’t the only one.) Since then, engineers have improved diesel engines dramatically. Direct-injection systems and turbochargers now boost power, cut emissions, and quiet the old trademark clattering. Tailpipe after-treatments clean sooty particulates and smog-forming nitrogen oxides from the exhaust. Aided by newly available ultra-low-sulfur fuels, diesel engines can meet the strictest emissions standards.

The 2.0-liter turbodiesel engine that GM will most likely put in the 2013 Cruze (and which is already on the market in Australia and Europe) uses turbocharging and direct injection to produce 161 horsepower and 265 pound-feet of torque. Dropped into the Cruze, it should manage nearly 50 mpg on the highway and 40 mpg in overall driving, a vast improvement over the 42 highway mpg and 33 mpg overall of the 2011 Cruze Eco, the most frugal non-hybrid compact car currently sold in America.

Diesel still has drawbacks. A National Research Council report estimates that replacing a gas engine with diesel adds nearly $2,400 to the cost of a sedan; some $700 of that pays to clean up the car’s exhaust. Diesel is also on average about 20 cents more per gallon than gas because of higher fuel taxes and rising global demand.

Indeed, until this about-face, GM had long insisted that diesel engines were too expensive to be viable in small, affordable cars. But hybrids such as the Toyota Prius have succeeded despite similar technology premiums. And regulations—such as the 54.5-mpg fleet-wide fuel-economy standard that automakers have to hit by 2025—may push automakers to build ultra-efficient cars first and hope that customers follow. GM may take heart that German automakers, who have recently reintroduced diesel cars in the U.S., have begun gaining traction with Americans. One in five Volkswagens sold in the U.S. now has a diesel under the hood.