Now rolling out of GM's soon-to-be-shuttered Wilmington, Delaware plant, The Solstice Coupe GXP goes from zero to sixty in 5.5 seconds. It's almost cruel that the clock is running down 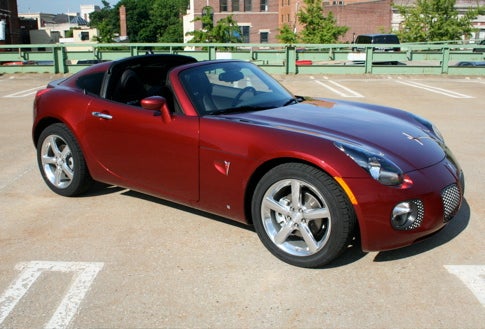 Is it too late to save the company that invented the muscle car?

That’s right– anyone want to buy Pontiac? No, not a Pontiac… the entire General Motors brand.

According to the latest news reports, GM will consider reasonable offers for Pontiac. If it doesn’t get any bites, it will phase out the brand by the end of next year. Setting the corporate stun-gun on one of GM’s oldest remaining nameplates is part of the company’s bankruptcy plan, which involves shedding several other brands as well. As of this writing, Saturn will likely be pawned off to the Penske racing-and-auto-sales empire, Hummer to a Chinese industrial-equipment giant and Opel to automotive supplier Magna International. Saab will go, too, as soon as a buyer steps up. The point is to raise funds and sharpen the “new” GM’s focus on stronger performers like Chevrolet, Cadillac and Buick (yes, Buick — with its devoted following in the high-growth Chinese market).

It’s perhaps ironic, and not just in the Morissetteian sense, that this company sales-a-thon puts the Solstice Coupe GXP, one of GM’s most sharply focused cars, in jeopardy.

Building from the rear-wheel-drive chassis introduced with the Pontiac Solstice roadster, the Coupe GXP denotes two welcome additions: a hard top with targa-style roof panel (Were you expecting T-Tops?) and GM’s 2.0-liter DOHC turbocharged Ecotec four-cylinder engine, with direct injection and variable valve timing (also available on the roadster). That engine is a gem in GM’s tarnished crown, producing 260 horsepower at 5,300 rpm and 260 lb-ft of torque at 2,500 rpm. A dual-scroll turbocharger keeps turbo lag to a minimum; running two exhaust passages to the turbine housing reduces spool-up time at low rpm. A gasoline direct injection system, well managed by onboard processors, assigns both good fuel efficiency and quick throttle response. GM says the Coupe GXP can go from zero to 60 in 5.5 seconds, a time similar to that of the V8-powered Ford Mustang GT. The Coupe GXP moves out with a V8-like shove, though you’d never mistake its nasal thrum for a deep V8 growl, the mere sound of which could knock a polar bear off an ice shelf from a hemisphere away.

For $650 (plus dealer install charge), GM Performance offers a power upgrade that includes a Bosch TMAP (temperature/pressure) sensor and revised engine-computer software. The result is 290 horsepower and 340 lb-ft of torque on premium fuel. The ECU reflash also raises the factory rev limiter by 200 to 6,500 rpm, enables the “no-lift shift” function found on the Chevrolet Cobalt SS and can detect and “learn” other engine modifications. I’m sure it’s a basket of fun, but I wouldn’t consider it a deal breaker.

Since its arrival in 2005, the rear-drive Solstice platform, shared with the Saturn Sky and its European doppelganger the Opel GT, has been one of GM’s most neutral-handling constructs. Suspension setup on the Coupe GXP is on the pliant side of firm, which is to say it won’t shake loose a peak-earning-years kidney from its moorings, though weekend racers would appreciate a tighter ground presence. As for the steering, a sharper, less processed feel might give the Coupe a closer connection with the pavement. During a long weekend with the Coupe GXP, I never felt that itch to arrange my neighbor’s garbage cans into an ad-hoc slalom course like I have in a Mazda MX-5.

From behind the wheel, the Solstice Coupe’s long hood and fender bulges recall a late-60s Corvette Stingray. It’s a welcome sensory experience, and stark contrast to today’s aerodynamics-friendly designs that push the hood below eye level so you can’t tell whether you’re driving a car or the Walt Disney World monorail. The snug cabin’s low roof and shard-like side windows mean blunt-force trauma is just an errant head motion away. Drivers taller than the mid fives and accustomed to high sills would benefit from an entry-exit retraining program. With the lightweight plastic-and-magnesium roof off, any feelings of confinement dissipate as head room increases to infinity. Don’t forget to pick up the optional carry-on cloth roof in case of rain — there’s not enough space on board to tote the hard top along. Of course, you can buy a lot of weather reports for the soft top’s $1,100 price.

Poking around on suburban back roads or lolling on the interstate yields mileage solidly in the 20s (city 19 mpg / highway 28 mpg). But use the throttle too often as a dispenser of thrills and expect to be on the EPA’s watch list, as the figures trend downward significantly.

Our test car had the same Aisin AR5 manual found in the roadster, not the optional ($995) 5-speed 5L40-E electronically controlled automatic. Shifter throws are reasonably short. Call us spoiled by progress, but it’s 2009: how about closer ratios and a sixth gear? Maybe if the coupe somehow survives GM’s teardown/rebuild all that will be in the cards.

Back in 2005, GM’s then Vice Chairman Bob Lutz — the “product guy” — promised to reawaken the Pontiac brand. At the 2008 New York Auto Show, Lutz tossed barbs at Pontiac’s checkered legacy, joking that Pontiac’s slogan from the 1980s, “We Build Excitement,” was at best hyperbolic, and at worst an outright lie. Lutz promised a new, more focused Pontiac fleet composed only of truly exciting cars. With that, Lutz stood by as the Solstice Coupe GXP rolled to center stage.