Does the Future of the Car Live in China?

And if so, what does that future look like? 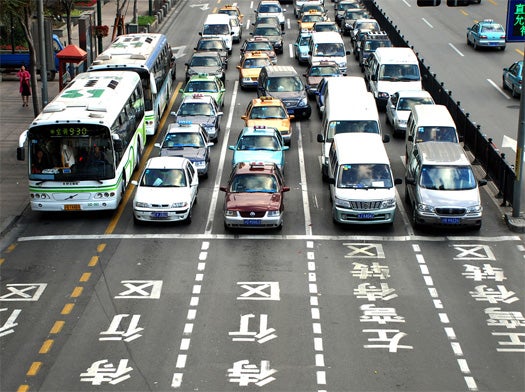 In just over a decade, the auto industry in China has exploded. As of November 2009, China is the largest automobile market in the world, combining active partnerships with established foreign brands with a thriving, developing domestic market.

China’s seemingly unstoppable auto power over the years has worried Detroit, Japan and Europe. Now, their concern may be warranted. China’s budding domestic manufacturers and their 100-percent Chinese-made cars are now poised to enter the export market. So what does that future look like?

Less than thirty years ago, Chinese citizens were forbidden to buy cars. China lifted its control on car purchases in the mid 1980s, and the demand for personal-use automobiles has risen steadily since. Between 1990 and 2000, annual car production grew from just 50,000 to more than 600,000 vehicles. In 2009, the country pumped out 13.8 million cars and sped past Japan to become the world’s largest automobile producer.

Last month, China set a new record for passenger car sales. Sales in March rose to 1.26 million vehicles, a 63 percent jump from a year ago, according to the China Association of Automobile Manufacturers. These record sales follow an impressive 2009, when China’s market grew 46 percent to 13.6 million vehicles, compared to a mere 10.4 million in U.S. sales.

While Detroit slowly recovers from poor sales that lost the U.S. its top spot in the industry, it may never again be able to catch up to China. Chinese government incentives and tax cuts are driving first time Chinese buyers, and those already looking for an upgrade, to auto dealerships. And as car manufacturing plants in China are ramping up production to keep up with domestic demand, they’re preparing for what looks to be the next frontier—exports.

The Chinese auto industry has made calculated moves to get to this next step. Numerically, the country is home to far more auto producers than the U.S. or Japan, and many of those are joint ventures with foreign automakers. By law, foreign car companies are required to partner with a Chinese company to do business in China.

Joint ventures in China include Volkswagen, General Motors, and Honda. Despite the famous foreign brand names, most cars made in China today are sold to Chinese consumers. China exported a mere 369,600 vehicles in 2009, according to the China Association of Automobile Manufacturers.

In May 1983, Chrysler’s Beijing Jeep Corporation became the first joint venture for manufacturing complete vehicles. In 1997, Shanghai General Motors was formed, and a year later the first Buick sedan rolled off the production line there. Of the country’s 47 auto manufacturers today, 26 of them are joint ventures, according to Automotive News.

“By forcing foreign companies to do joint ventures, they have been getting a free education on how to build cars and they are getting better at it,” says T. Russell Shields, a founding officer of the Intelligent Transportation Society of America.

That’s not to say foreign automakers haven’t benefited from sharing their trade secrets.

This March, General Motors sold more cars in China than in the U.S.. Chinese domestic sales for General Motors and its joint ventures in China jumped 66.9 percent in 2009 to a record 1,826,424 vehicles. GM China holds an estimated market share of 13.4 percent and the company predicts sales in 2010 could top 2 million. Meanwhile, Ford Motor Company’s joint ventures and wholly owned entities in China delivered record sales of 440,619 vehicles in 2009, an increase of 44 percent from 2008.

While many components used in U.S. cars are already manufactured in China—including the V6 engine in the Chevrolet Equinox and GMC Terrain—this explosive growth of wholly Chinese-made cars could soon mean U.S. showrooms will be filled with “Made in China” bumper stickers. The first of these vehicles to make it to the U.S. will likely be familiar American brands, mostly manufactured in China.

A General Motors document leaked last year suggested the company could be the first to import Chinese-made cars to the U.S., as early as 2011. If it goes through, the GM plan would do little harm to American autoworkers; virtually all of the lost jobs in this case would be Canadian.

You can also expect to see inexpensive, wholly domestic Chinese brands like BYD and Geely imported to the U.S. soon. But first, the cars need some tinkering. “They’re not yet up to our safety standards,” says Shields. “But it’s certainly the case that the Chinese will be selling cars in the U.S. in a few years.”

The trick will be to not to repeat mistakes made by the Germans, British, Japanese and Koreans. “Those early attempts showed the companies were immature in terms of style, content, quality and reliability,” says George Peterson, president of the marketing and consulting firm AutoPacific. “It takes decades to really understand the American market.”

Still, a significant number of Americans are already willing to buy Chinese, according to market research conducted by AutoPacific in 2009. Of new car and light truck buyers in the USA, 16 percent of respondents said they’d be willing to consider a brand from China. “This is a very high number,” Peterson points out, only 11 percent said they’d consider a brand from India. “And those people are younger, more affluent and more highly educated than the typical new car buyer. If a Chinese brand could attract these people it could cause a huge ripple effect among not only the Big Three, but also the Japanese manufacturers selling in the USA.”

In March, China’s Zhejiang Geely Holding Group set itself up for the ultimate safety challenge. The company purchased the famously secure and boxy Volvo brand for $1.8 billion. The Washington Post reports that the acquisition risks tarnishing the brand without giving Geely the global boost it seeks.

In addition to improving safety records, the Chinese government and automakers are aiming to make the China auto industry a leader in greener cars. Billionaire Warren Buffett first shined the spotlight on the promise of China’s green auto industry in 2008 when he invested in BYD, a Chinese battery and electric car manufacturer.

Aside from the export value of greener vehicles, the Chinese government has a huge domestic interest in cutting fuel use and emissions. Thanks to the auto boom, China is now the second largest consumer of oil, behind the United States.

Last year, Chinese automaker BYD announced it had plans to sell its 5-seat electric car, the E6, in the U.S. in 2010. But The Street reports a more recent press release suggests the company has rolled back its ambitious plans to produce a mere 100 E6 vehicles in the company’s home town of Shenzhen.

On the forefront of this move is electric carmaker Coda Automotive, which may soon open assembly plants in Los Angeles County, according to the Los Angeles Business Journal.

Although the company is Santa-Monica based, the Coda all-electric sedan would be manufactured primarily in China. The car’s chassis and other parts will be assembled in Harbin, and the batteries will be put together in the port city of Tianjin as part of a joint venture with one of China’s biggest battery manufacturers. The car and battery would then be shipped to the U.S. for assembly and sale, with a price tag of about $40,000.

Detroit will keep watch over its shoulder for China’s imminent move onto American home turf. From their own operations in China, they have a good view of what the Chinese are up to. Of special concern are the inexpensive, energy-efficient markets, where U.S. companies have lagged behind. But until a distributor is set up to begin selling Chinese cars, Peterson says, “it appears the Americans aren’t really concerned.” Perhaps they should be. American consumers are already primed to purchase Chinese cars when they finally do arrive.

Still, China is not entirely the evil enemy. Business is booming for Detroit-based companies in China today, and those partnerships are paying off at a time when sales in the U.S. have been less than stellar.

“We’ve helped educate the Chinese and they’re going to be a big force,” says Shields. “And that won’t be too long from now.”