How Mazda Reinvented the Diesel Engine

The company's new diesel engine will get 44 mpg plus meet strict emission standards. 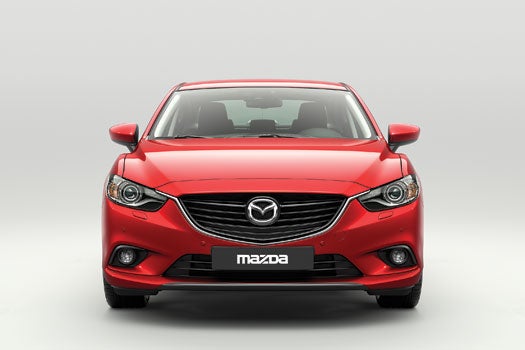 Diesel-engine designers have long grappled with a dilemma: Reducing emissions meant either cutting efficiency or adding expensive equipment. With the Skyactiv-D, Mazda engineers decreased pollution, boosted mileage, and eliminated the cost of exhaust after-treatments by building the world’s lowest-compression diesel engine. They then added two turbochargers and a capacitor-based regenerative braking system. When it arrives in U.S. showrooms late this year, the Skyactiv-D–equipped Mazda6 should deliver approximately 44 highway mpg while meeting strict emission standards, proving that diesel engines have many miles left in them.

A two-stage turbocharging system contains a small turbine that boosts low-end torque, as well as a larger turbocharger that increases high-end horsepower. An electronic controller runs the turbochargers, tuning performance to conditions.

The Skyactiv-D’s engine overhaul has a side benefit: Engineers were able to build the engine with lighter, lower-friction components, including 25-percent lighter pistons and an aluminum cylinder block that trims 55 pounds.

Diesel engines ignite fuel by combining it with air and compressing it to extremely high pressure. Yet compared to that of gasoline, the high pressure and temperature of diesel combustion produce more smog-forming nitrogen oxides and sooty particulate matter. To meet pollution standards, modern clean diesels delay combustion until the piston begins its descent—but that reduces power and efficiency. Mazda’s solution: new fuel injectors and exhaust valves that allowed engineers to lower the compression ratio from 16.3:1 to 14.0:1.

Before exhaust even enters the tailpipe, the engine’s low compression ratio cuts emissions of nitrogen oxides and other pollutants enough to meet present (and future) standards both in Europe and the U.S. As a result, the Mazda6 does away with expensive urea tanks (which drivers have to refill every 10,000 miles or so) that many diesels use to neutralize emissions.

i-ELOOP, one of the industry’s first regenerative braking systems to store energy in a capacitor rather than a battery, further improves fuel efficiency. When the driver decelerates, an alternator generates up to 25 volts, charging the capacitor in seconds. Stored energy can supply all electric needs—headlights, climate control, audio system—for one minute. Capacitors have been used to boost power on F1 cars; eventually, they could be used to do the same in passenger electric cars.