How Do We Program Ourselves To Save Fuel?

Monitoring and controlling drivers' behavior could save billions of dollars in gas. 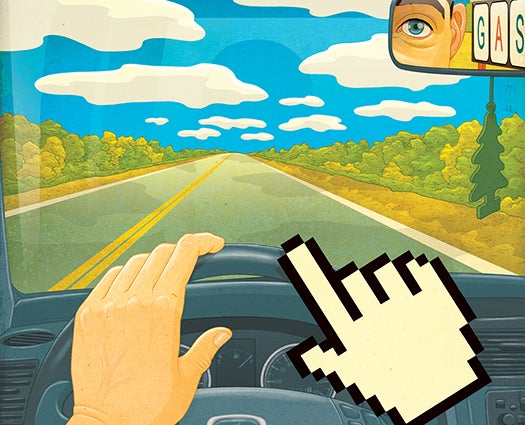 Last year, American car buyers named fuel economy the most important consideration when shopping for a car, outranking even quality and safety. The change coincides nicely with the flood of hybrid and high-efficiency internal-combustion engines on the market. But as efficient as an engine may be—the best among them can get up to 50 miles per gallon—they can’t compensate for one glaring inefficiency: us. Poor driving habits (floor it!) can slash fuel economy by as much as one-third. To maximize it, engineers need to not only remake the cars; they need to remake the drivers.

In his dissertation “Charismatic Computers,” B.J. Fogg, a psychologist at Stanford University, demonstrated how technology can influence behaviors. In his model, an action is the result of three elements—motivation, ability, and a trigger. For drivers, the motivation for efficiency is clear: saving fuel saves money. (What’s more, it can help reduce their carbon footprint.) And any driver has the ability to save gas just by sticking below 50 mph and avoiding abrupt acceleration and braking. What’s been missing is the trigger.

As efficient as engines may be—the best get 50 mpg—they can’t compensate for one glaring inefficiency: us. Until the late 1990s, drivers had no way of knowing how much fuel they were consuming at a given time. Then Honda introduced the Insight, the first mass-produced hybrid in the U.S. It was one of the first cars with a real-time fuel-consumption meter in the dash. The trigger was born. Now the dashboards of eco-friendly cars, whether it’s the Ford Fusion or the Nissan Leaf, are packed with instruments that are designed to encourage better habits. The Fusion’s LCD, for example, shows leaves and vines to signify good driving.

Real-time data interfaces are spilling into cars with conventional internal-combustion drivetrains, as well. In the past few years, developers have launched a number of smartphone apps that analyze a phone’s accelerometer data to provide readouts of driving style and its effect on fuel efficiency. Other apps, including Torque and Automatic, incorporate dongles that plug into a car’s onboard diagnostics port. The Bluetooth-connected dongles relay engine-performance information from a car’s onboard computer to an app. The Automatic app, for instance, chimes when it detects speeding, hard braking, or hard acceleration.

Just as Fogg predicted, these triggers work. A study by the University of California Transportation Center found that when drivers were provided with instantaneous miles-per-gallon feedback, fuel economy improved on average by 6 percent on city streets. Apply those gains across only one-third of the cars in the U.S. and drivers could save billions of dollars in gas.

Monitoring and controlling driver behavior could also pave the way for automotive advances. Quantifying cars is an important step toward automating them. The more performance data automakers collect, the better able they will be to perfect the algorithms that will eventually direct our automatic chauffeurs.