Twenty years ago, Ford took aim at European sports sedans and fired a tweaked-out Taurus across their bows. By the time the Europeans stopped laughing, that Taurus was over the horizon and gone. Now, the SHO is returning. But who’s laughing this time? 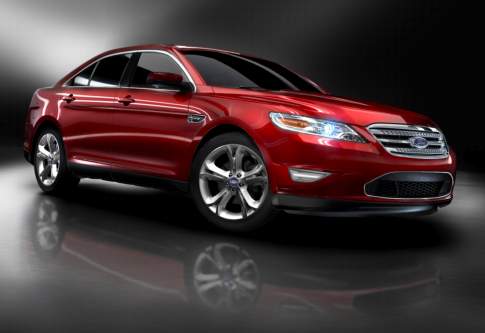 With a 365-horsepower twin-turbo V6, spry handling and a comfortable and attractive interior, Ford's new Taurus SHO is a welcome return of a sleeper performance sedan. Ford Motor Company
SHARE

The 2010 Ford Taurus SHO reprises a work order first issued in 1989: an austere midsize car outfitted with a hotter engine and stiff suspension, which can carve canyons like an upmarket luxury sled and costs thousands less than such cars from, ahem, Those German Brands. This go-round, Ford’s added bold styling, a comfortable and attractive interior, tons of usable space, a twin-turbo V6, even more lateral grip and quicker responses. The result is a machine greater than the sum of its parts, and the best car Ford’s ever built.

The SHO starts with the latest Taurus, a ground-up redesign based on an updated version of the Volvo-derived D3 platform, a tight set of frameworks that began life underpinning the top-line Volvo S80. Getting the Taurus right was a pet project of Ford CEO Alan Mulally, who apparently knows brand equity when he sees it on a car badge. Turning that equity into respect is his game here.

Unlike the model it replaces, the ’10 Taurus appropriates few design cues from established players, staking out a territory between American-style grand gesture and Japanese figurative discipline. Although, thanks to the now-common automotive slab-sidedness that serves crash standards over aesthetics, you can’t hang your arm out the window while driving. But then, no one’s been able to do that and not look like a complete toolbag since 1973. That low window-to-beltline ratio also hinders visibility at the corners somewhat, but does make the Taurus look as sturdy as a bank vault.

Really, what the new Taurus has that the past two or so generations of Tauruses has not is attitude. And no Taurus has as much attitude as the new SHO.

The original 1989 SHO rose to a degree of prominence among car geeks via a Yamaha-built V6 that apparently fell to earth from motorsports heaven. Created to rev deep into the 8000 rpm range, though detuned so the rest of the Taurus components wouldn’t liquefy, the 3-liter plant turned out a hot for the time 220 horsepower. Paired with Ford’s MTX-IV 5-speed manual, it provided what some magazine editors 20 years ago called “spiritedness.” Translation: It rocked their argyle socks.

The new SHO is likewise an engine-focused proposition, fitted with Ford’s latest EcoBoost V6. That twin-turbo powerplant is the same as the one we tested in the Lincoln MKX. All of 3.5 liters, it produces 365 hp and 350 lb-ft of torque as early as 1,500 rpm. From behind the leather-wrapped wheel, it translates into the kind of spry acceleration normally reserved for European sedans, American muscle cars and model rocketry. The SHO’s all-wheel-drive system means no burnouts, just a leap from zero to fast in a perception-shattering instant. Turbo lag? How totally ’80s.

The EcoBoost is paired perfectly to a new six-speed automatic, which on the SHO comes with Ford’s SelectShift electronics and paddle shifters. That quick-shifting automanual is smooth above all, with software minimizing torque loss between gears.

Also like the original, the 2010 SHO is no slacker in the handling department. The base Taurus gets Ford’s latest combination of front struts and “SR1” rear multi-link suspension. That name is derived from its 1:1 shock absorber ratio, meaning the amount of extension is equal to the amount of compression. Ford reps say this setup offers a sound baseline on which to sport-tune the SHO’s ground control, and more suspension travel to accommodate larger wheels, like the 20 inchers on the SHO I drove recently. As a result, road feel is a balance of control through stiffness and comfort through shock-absorption. Steering is light and brisk, making the big SHO feel smaller and lighter than its 4,015 lbs suggests.

The new Taurus leapfrogs mainstream midsizers like the Toyota Camry, Honda Accord and Chevy Impala, both in size and price. But for the extra five or so grand, the Taurus feels like a premium car at a $10,000 discount, instead of a decked-out mid-pricer. Big difference. The SHO is all that plus 100 extra horsepower and the stiffened suspension to match. It’s not as off the hook as the 1989 SHO, but rather a new, more refined model aiming to satisfy what the Europeans would call “executive” tastes.