Test Drive: Ducati’s 2010 Multistrada is Four Superbikes in One 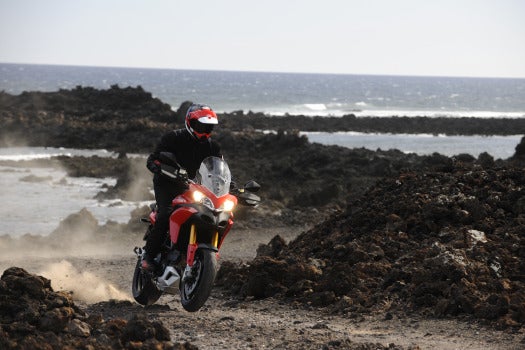 Enduro mode allowed for some rooster-tails just off the Atlantic beaten path.
SHARE

Motorcycles are an expensive hobby for most. Now, adventurous bargain-seeking riders can own four different bikes for the price of one. The 2010 Multistrada 1200 is infused with Ducati’s major superbike technologies — traction control, electronic suspension, and ride-by-wire throttle — as well as many extravagant amenities such as GPS and keyless ignition, all of which result in a luxurious machine capable of flawlessly handling all manner of topography.

The S model we tested on the island of Lanzarote, off the coast of Africa, came standard with Ducati Traction Control (DTC), ABS and the new Ducati Electronic Suspension (DES) system, which works in unison with the throttle mapping at the push of a button to adjust the bike’s persona on the fly among four settings: Touring, Urban, Enduro, and Sport. This particular location, sculpted from cooled lava by the surrounding sea, was a rider’s playground and the Multistrada was at home on all of the terrain options provided by Mother Nature.

At the beginning of the test ride, the long straightaways connecting the north and south ends of the island were perfectly suited for stretching the legs of all 150 horses in Touring mode. Lanzarote’s highways were barely wide enough to fit two cars side-by-side so, the power came in handy when passing buses full of German tourists. The DTC intervention was unnoticeable at level 5 (level 8 being the most intrusive) and the softening of the DES made for smooth cruising at top speeds on Pirelli’s Scorpion Trail tires.

A flick of the switch into Urban mode reigned in the ponies to a more manageable 100HP, while the suspension loosened up even further to handle the cobblestone-laden twists, turns, and potholes of the smaller island villages. Though the DTC didn’t register much on our test of the island’s cityscape, the factory setting of 6 was ready to intervene should some side of the road rubble find its way under the rubber.

A little further off the Atlantic-beaten path, the Enduro mode comes in supremely handy when pulling off newly paved roads into pits of volcanic gravel and sand. A traction control setting of 2 allowed for more wheel spin and made light work of what is normally a frightening thought for most street riders. Enduro matches the 100 hp output of the Urban setting, while the DEC raises the bike’s rear suspension for extra clearance.

The true test of the Ducati’s pedigree came while traversing the 180-degree switchbacks which line Lanzarote’s volcanic craters. Again, a touch of the finger toggles you to Sport mode, where 150HP and a super crisp throttle engage instantly while the suspension and traction control level 4 allowing the limits and edges of the road to be pushed. Unfortunately, fear of being torn to shreds by razor-sharp lava rocks kept my fantasies of becoming a motoGP contender in check for the day.

Should an expert rider want more from the machine than the factory settings allow, each of these standard modes can be dialed into for more complete customization. In fact, there are over 400 million combinations to be had according to Ducati factory engineers. And while one can experiment and save several different riding options, the factory settings can always be reestablished at the push of a button.

All told, this 423-pound descendant of purebred racing heritage is a formidable steed for those looking to explore every one of earth’s four corners.