Is There Room for Zoom-Zoom? Driving the 2009 Mazda6

Mazda redesigns the Mazda6 to face down stiff competition from Toyota, Honda, Nissan and Chevrolet, then the world falls apart. Tough break or opportunity to make a quiet impression? 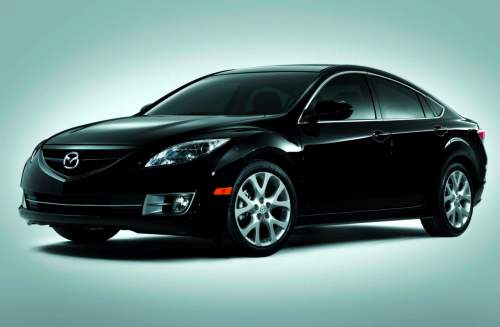 It’s not easy to be a runner-up in the midsize sedan market especially, as sober-voiced commentators say, in “these economic times.” Cue thunder. Inevitably, the Toyota Camry and Honda Accord suck up all the market share, while the up-and-coming Chevrolet Malibu — and the company that builds it — steal headlines, offer discounts and win sympathy cash. What’s a backfield player like Mazda supposed to do?

Good question. This is a game of high volume, where selling a million cars is a good start. Midsize sedans carry profit margins far slimmer than those of pickup trucks and SUVs. A smash hit can be a game-changer (check the history books under “Ford Taurus”), but second-tier players can still make headway if they tweak strategically. Just ask Nissan, whose roomy, sprightly Altima eventually broke through the clutter, and Chevrolet, whose re-imagined Malibu made buying American a reverse-hip fashion statement. That is, before the entire industry went to hell in an apple cart.

Strategic tweaking is Mazda’s strategy too. Since its introduction in 2002, the Mazda6 — a continuation of the 626 line — was always one samurai short of a quorum. As its competitors swelled in size and moved upmarket, the Mazda remained too cramped and too rattly. It did dole out the fun, however, with a V6 that rewarded high revs, a quick steering rack and a rompable four-wheel-independent suspension — double-wishbones in front and Mazda’s “E-link” multilink in the back. Hardcore fans mention the last-gen Mazda6 it the same breath as BMW’s 3-Series or Audi’s A4. But most buyers of midsize sedans aren’t interested in zoom-zooming. They want space, luxury, and value.

Mazda engineers obliged. First, they addressed the previous-model’s rattletrap reputation. Job One in most modern automakers’ math-nerd bullpens is cutting NVH — noise, vibration and harshness. Mazda took aim from several directions. At the engine, they smoothed out power delivery by adding tuned mass dampers at the forward end of the crankshaft to reduce harmonic vibrations. At the output end, they used a flywheel that flexes to absorb bending vibrations from the engine. That kill-’em-all approach to damping follows in the clean-sheet Mazda6’s more-rigid body structure. A few trips to the wind tunnel has helped reduce airflow noise as well.

The 2009 Mazda6 is larger than both the previous model and the Toyota Camry. Designers broadened the new 6’s wheelbase by 4.5 inches, its overall length by 6.1 inches, and trunk volume by 10 percent. The leggiest among us will revel in an extra inch-and-a-half of space. It’s got a full feature set for its class, including traction and stability control, antilock brakes, tire-pressure monitoring, and a half-dozen air bags set throughout the cabin.

New engines reflect Mazda’s continued focus on the sportier end of the midsize gamut. A 2.5-liter four with variable-valve timing produces an honest, if not overly eager 170 horsepower; that’s up from 156 hp in the previous model’s 2.3-liter four. Mazda surpasses its contenders in V6 power, with the same Ford-derived 3.7-liter six as Mazda’s CX-9 crossover, turning out 272 hp — two more than the Nissan Altima’s V6, and a bump of 60 hp over the previous Mazda6’s three liter. The V6 gets a six-speed automatic only; the four can be ordered with a six-speed manual or a five-speed automatic with manual mode.

The four pops along smoothly at highway speeds, while the six deals a premium kick that triggers all the right neurotransmitters. The six-speed automatic comes with a bit of trickle-down tech from Mazda’s RX-8 sports coupe. That is, active adaptive shift (AAS), which chooses shift points based on data from sensors monitoring acceleration, braking, cornering and road conditions. The system, which holds the most advantageous gear ratio — mostly third — through corners, recently proved its worth on the circuitous secondary roads of upstate New York.

In the turns, and how can I say this delicately, the new Mazda6 feels more plush but less agile than the car it replaces. Looking past the somewhat overboosted steering of a family sedan, the 6 is nonetheless entertaining on two-lane state highways. Several chassis upgrades, including a single-section, forged-steel lower-control arm in the front for added rigidity, have added to the new model’s hardier road feel. Sport-compact aficionados will give a nod to a new set of twin-tube KYB dampers, placed further outboard and aligned upright for improved wheel control. Still, I’d have enjoyed a bit more aggressive tune to the running gear — a relentless corner carver this isn’t. A posterior preserver, possibly.

Those to whom Mazda’s RX-8 sports car appeals will cotton most to the Mazda6’s new look. The most dramatic example of this co-language is a set of fender bulges that, from the front view, imply a taper forward of the A-pillar that doesn’t seem to exist. Next time, I’ll bring a tape measure. Either way, the Mazda6 adds enough avant-garde to make it stand out among the regulars. It’s also quieter than Sunday dinner at the Order of St. Bruno. And in this buyers’ market, in which sales numbers are worse than any time since Arsenio Hall wore a hi-top fade, every little bit of good differentiation counts. And a few strategic purchase and lease incentives — and maybe a cashed-in clunker or two — don’t hurt either.