GE's Evolution does 0-60 in 45 seconds, unloaded. Braking is a different story: A full-on panic stop takes half a mile. 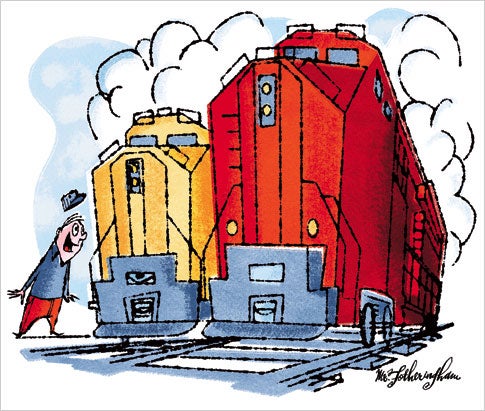 They sit on a spur of test track outside General Electric’s locomotive factory in Erie, Pennsylvania, panting and grumbling like two old lions half asleep. The ominous, muttering rumble is the sound of 8,800 horsepower at idle–24 cylinders with pistons big as buckets, turbochargers the size of washing machines, two V12 engines direct-driving alternators five feet in diameter. These are two of the most advanced diesel-electric locomotives in the world: GE Evolutions, running all-new powerplants designed specifically to meet stiff Tier II EPA locomotive emissions regulations that go into effect next year.

You didn’t know locomotives had emissions regs? Neither did I. I assumed that the 207-ton iron gorilla of the wheeled world damn well did whatever it wished. But the new Tier II standards require substantial cuts in NOx and particulate matter, and GE, one of the world’s major locomotive manufacturers, has designed a new engine to meet them handily. The engine has an air-to-air turbocharger intercooler that lowers induction-air temperature to only a few degrees above ambient, for cleaner emissions and more power. Not only is the new GEVO 12 four-stroke diesel 40 percent cleaner than its predecessor, it’s three percent more fuel-efficient as well.

That may not sound like much, but it’s huge: A half-percent improvement is a big competitive advantage in loco sales. A locomotive typically burns about 300,000 gallons of fuel a year, and saving 9,000 gallons per engine can make a big bottom-line difference.

A modern locomotive is a hybrid. The diesel doesn’t drive the train; it cranks an alternator, which powers the six huge electric traction motors that actually turn the locomotive’s wheels. Each motor is set transversely between a pair of drive wheels. On an Evolution the electric motors will put out a total of almost 60,000 pound-feet of torque at start-up–the equivalent of about 120 Ferrari Enzos–good for a zero-to-60 time, unloaded, of just shy of 45 seconds. Rather longer, though, if you’re dragging a 17,000-trailing-ton coal train.

The traction motors also brake the train. When the driver (“engineer” no longer being the term) wants to slow down, he turns the motors into generators, reversing the field so they’re making electricity rather than consuming it, and are thereby magnetically resisting the turning of the wheels. This is a lot cheaper than replacing brake shoes, which won’t last long if asked to hold back a train that is as heavy as a tramp freighter. The wheel brakes are used only at slow speeds and to bring the train to a complete stop.

The excess current produced is dissipated by a series of big, fan-cooled “dynamic-brake grids,” effectively the world’s largest hair dryer, near the top of the car body, toward the back. Does the grid actually glow, I ask lead systems engineer Mike Schell? “It does when it catches fire,” he says with a straight face. But even with the blowers at work, you wouldn’t be able to tolerate the compartment where the grid lives.

How much fun is it to drive a locomotive? Not much. The machine has its eye on you, and headquarters has its eye on the machine from a distance. Every 2 minutes (every 30 seconds when the train is traveling faster than 50 mph), a big red caution light that reads “alerter reset” glows on the driver’s panel. The driver has 25 seconds to slap a yellow switch to affirm that he is indeed present and accounted for. If he doesn’t, the power automatically backs down and then the brakes come on–hard. This is the modern equivalent of the deadman throttle. The fear of the out-of-control train traces partly to the era in which engineers sat in the very nose of the train rather than farther back in what’s today called a safety cab. Up front, they would occasionally experience a mesmerizing vertigo brought on by the drivers’ eyes following each passing cross tie as it rushes under the cow- catcher. Lightplane pilots are prey to similar phenomenon, flicker vertigo, caused by looking at a bright light through idling prop blades.

The accountants in a railroad company hate hard braking, especially if it means replacing tracks scalloped by sliding steel wheels. But almost every day it happens somewhere in the country, typically at grade crossings. The biggest danger a loco crew faces, up there on the pointy end of the engine, is not the high-speed Casey Jones crash but the drunk in the pickup truck trying to weave through the crossing gates at three in the morning. “People think trains can stop like cars,” says GE product-line manager Peter Lawson. Clearly people are not thinking. It can take half a mile to panic-stop a loaded train.

Since four-bar crossing gates that completely block the road are roughly twice as expensive as the standard two-bar gates, railroad companies are loath to install them. Indeed, many rural crossings are still totally ungated, which means that a train has to stop so the driver’s helper can climb out and physically halt traffic. There’s nothing much a loco driver can do when approaching a gated crossing but blow the horn, particularly if he’s ballin’ the jack to stay on schedule. And with increasing numbers of municipalities passing no-horn-blowing-after-midnight noise-pollution regulations, even this weapon is being disarmed. Granted, a train weighing thousands of tons is going to turn even a 4-ton dually pickup into shrapnel, but the front end of a locomotive is not a nice place to be when the blast goes off.

The Evolution driver sits in a kind of glass cockpit, behind two large CRT monitors upon which he can call up some 30 different graphic pages of instruments, gauges, graphs and information, with a separate monitor for the helper. Every aspect of the engine’s health can be tracked, and GE monitors most of its locomotives remotely, via GPS and an OnStar-like link to the Erie factory. The telemetry will spot a fault and transmit data to the closest service shop, telling the technicians what the problem is. They will alert the crew to stop if the problem is urgent.

Toughest duty for a crew is not a zillion-ton coal drag two miles long. No, the worst kind of trip features a bunch of ungated crossings as well as car exchanges that require the drivers to constantly climb in and out of the train.

Can a sloppy driver abuse a $2 million engine? Not really, says Schell. “There’s nothing he can do to hurt it. We’ve got enough protection and warnings in place to protect the temps and pressures, the cooling water, the oil, everything. The only people who can hurt an engine are the railroads, by not doing the proper maintenance.”

Still, between each of the alerter resets, humans are in control, and they can lose control. GE’s short test track in Erie ends “in a pile of dirt and a nice old lady’s yard,” says Lawson, “which we’ve needed to landscape a couple of times.”