A laser cannon that blasts from the air 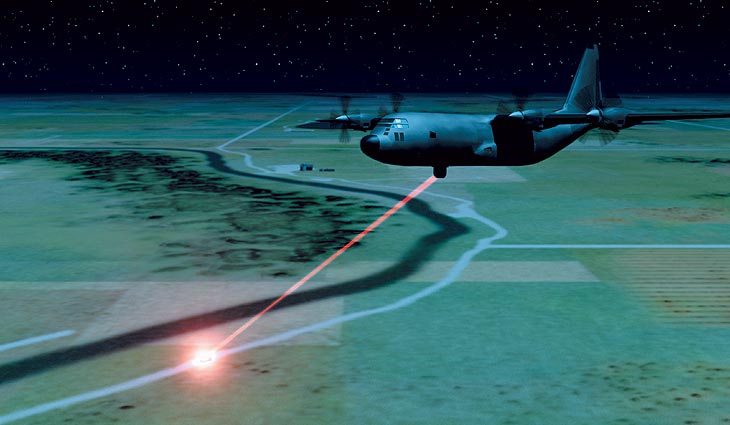 The Advanced Tactical Laser, fired from a Special Forces A/C-130 Gunship, will have a range of up to 20 miles, as well as pinpoint accuracy and speed-of-light responsiveness. The first generation will employ chemical lasers, which will later be replaced by diode-pumped solid-state lasers powered by electricity.

Directed-energy weapon specialists at the Air Force Research Laboratory are close to overcoming the two main hurdles that have confined laser weapons to science fiction for the last half-century. Tests by lead contractor Boeing have demonstrated that the laser has enough power to function as a weapon, and that the chemical exhaust, which could pose a considerable threat to the weapon’s operators and individuals on the ground, can be safely contained in a sealed system. If all goes according to the U.S. Special Operations Command’s plan, within a decade or so the Advanced Tactical Laser may introduce a new class of weaponry to the battlefield.

The weapon’s first incarnation, expected by 2010 at the earliest, will be a megawatt-class chemical oxygen-iodine laser (COIL) fired from a rotating turret beneath the nose of a C-130 gunship. The beam could be up to 4 inches in diameter and have a 20-mile range–enabling it to burn through vehicles and machinery with a precision and millisecond timing that missiles and cannons can’t achieve. (Cannons, in particular–now centuries old in concept–are tricky to aim. These “indirect fire” weapons must be pointed far from the target to factor in wind speed, humidity, firing force–even the rotation of the Earth.)

Next on the agenda: developing targeting, tracking and firing hardware. Among the questions researchers must answer: how long must the beam linger on a target to have the desired effect. “There are some interesting things with the directed energy technologies that we just don’t know about,” says Lt. Col. Joseph Panetta Jr., program manager for the Advanced Tactical Laser at the U.S. Special Operations Command headquarters at MacDill Air Force Base in Florida. “We need to determine exactly how it will perform on the battlefield.”

Laser weapons are a relative bargain compared with existing long-range weapons: They’re expected to cost $8,000 per shot versus up to hundreds of thousands for missiles. Lasers are also tunable, which adds versatility: When less-than-lethal force is required, such as in urban areas or when hostages are present, the beam’s duration can be reduced so that it disables technology but only injures people. “We want a system that can generate a variety of effects on the battlefield, from damaging something to totally destroying it, to just kind of harassing with it,” Panetta says. “This seems to offer us that.”

Next-gen tactical lasers will likely be electrically-powered and diode-pumped, since chemical lasers require storage and transport of heavy ingredients. The greatest challenge with electric lasers, says Lt. Col. JoAnn Erno, head of the power division at the Air Force Research Laboratory at Wright-
Patterson Air Force Base in Ohio, is managing the heat that’s generated–lasers are only 10 percent efficient, so 90 percent of the power is lost in heat. “Controlling the heat will require active cooling,” she says, “such as spraying the laser’s diodes to keep them from overheating.” Solid-state lasers will be smaller than chemical ones, permitting their use on fighter jets and ground vehicles. The Joint Strike Fighter, due to enter service in 2009, is a well-suited potential platform, says Erno, because its engine includes a metal shaft that spins fast enough to easily power a laser.

Lasers are an example of a weapon that should be developed for multiple uses, says Garrett. “If you can get several (military) branches to use it instead of four different devices that do the same thing, you can make it cheaper by cutting down logistics problems and easing training.”