Attention: Hollywood, Wall Street & Washington. Here's the real Power List, and you're not on it.

A lightweight fiberglass powerboat called Fountain Lightning can top 142 mph on still water. That’s a powerful boat. A tug now under construction in China will tow an entire offshore oil-drilling platform into place, even on a restless sea. That’s also a powerful boat. When talk turns to machine muscle, it’s often about the most powerful engine that will fit into and move a machine. But to build an authentic Power List you have to ask what the measure and purpose of the power is: horsepower, torque, acceleration, top speed, hauling capacity, lift. The short power profiles here focus almost exclusively on machines that are made (or at least assembled) in the United States. And no stunt machines, no machines built solely to demonstrate power, no school buses with jet turbines attached, were allowed. These machines do an honest day’s work.

POWER IN THE AIR

Airliner engine
In today’s commercial airliners, you can’t top the Pratt & Whitney PW-4098 for aeronautical grunt. This is the company’s largest commercial jet engine, and a pair of them currently supplies 196,000 pounds of thrust to Boeing’s 777-300 airliner-98,000 pounds per engine, more than four times the thrust of the Pratt & Whitney JT3D engines on the old Boeing 707. Each engine develops the equivalent of 78,400 hp, enabling the 777-300 to take off with as many as 550 screened and sniffed passengers-and cruise at Mach .84 nonstop from, say, San Francisco to Tokyo. But the PW-4098 will relinquish its powerhouse title next year, when the Boeing 777-300ER enters service. This extended range jetliner will sport twin General Electric GE90-115B engines, each of which produces a whopping 115,000 pounds of thrust-the most ever from a commercial jet engine. The four Rolls Royce engines on the upcoming double-decker Airbus A380 Superjumbo will not be as powerful individually, but they’ll combine to produce 280,000 pounds of thrust. Cost: $12 million (PW-4098).

Rocket engine
For sheer thrust, nothing beats the three main engines and two solid rocket boosters of the space shuttle: 7.3 million pounds of thrust at liftoff, slightly less than that achieved by the Saturn Five when it launched the Apollo
missions using a cluster of five F1 rockets. The main engines burn hydrogen and oxygen;
the boosters burn atomized aluminum combined with assorted oxidizers, catalysts, binders, and curing agents.

Rocket engines are reaction engines. Fiery exhaust rushes down and reacting forces push the rocket up: In the space shuttle’s case, 4.5 million pounds rise into low-Earth orbit in about 10 minutes.

The most powerful single engine powering an expendable rocket in use in the United States is the RD-180. This is a Russian import, reflecting a post-Communist opportunity to cash in on the Soviet heritage of building big-muscle rockets. The RD-180 is built in Russia and assembled into Lockheed Martin’s Atlas III and Atlas V rockets in Colorado. Generating 860,200 pounds of thrust, this engine is the only one used on expendable U.S. rockets that can throttle up and down. One benefit of that: less stress on satellite payloads. Cost: about $10 million (RD-180).

Heavy-lift helicopter
The weightlifting champions of the rotor-wing class are the Sikorsky CH/MH 53E helicopters, designed for use by the U.S. Marines and the Navy, respectively. They can raise payloads of 16 tons, thanks
to their trio of General Electric engines-the CH-53E has three 4,380-hp T64-GE-416As; the MH-53E has three 4,750-hp T64-GE-419s-which turn a massive (79-foot diameter) seven-bladed rotor. That means they can transport large trucks, small airplanes, tons of supplies, or as many as 55 combat troops at a cruising speed of 150 knots. What’s more, the Sikorsky CH-53E is the only chopper that lifts the M198 155mm howitzer and variants of the Marines’ Light Armored Vehicle. Cost: About $30 million, depending on configuration.

Fighter plane
The McDonnell-Douglas F-15E Strike Eagle operates on the hot-rod principle of stuffing large, powerful engines into a compact package, yielding what is arguably the most powerful plane in its class. Granted, the F-22 Raptor, to be deployed in 2005, has two Pratt & Whitney F119-PW-100 engines said to deliver 35,000 pounds of thrust apiece-but the F-22 won’t be as quick as the F-15E. According to the U.S. Air Force, the
F-15 was the first operational fighter whose engines’ thrust exceeded its loaded weight, meaning it could accelerate while in a vertical climb. Powered, in some versions, by a pair of 29,000-pound-thrust Pratt & Whitney F100-PW-229 turbofan jet engines, the F-15E is capable of Mach 2.5, or 1,875 mph, and has a combat ceiling of 35,000 feet. Cost: $31 million.

POWER IN THE WATER

Powerboat engine
Mercury Marine of Fond du Lac, Wisconsin, has long specialized in high-horsepower outboard engines. For “consumer performance,” their top-of-the-line model is the Pro Max 300X, a 185-CID V6 that produces 300 hp at 6,800 rpm. Slightly more esoteric, but still available to anyone with an ample checkbook, is the 2.5 EFI Drag engine, built in small numbers (30 to 50 a year) by Mercury’s racing division. It’s a 2.5-liter V6 two-stroke that delivers 320 hp at 9,000 rpm. It does not come with a warranty.

The racing motor is mostly for aquatic drag racing but is occasionally sold to guys who like to fish fast. Guys like Ronnie Farlow, a master mechanic and pro bass fisherman from Brandon, Mississippi. Farlow gets “oh, 108, 109 mph on it.” Why would anyone need to fish that fast? “The advantage is when you got to cruise 20 miles down the lake to get to a new fishing spot. And you can outrun a storm if you need to.” (The Fountain Lightning, a 42-foot fiberglass V-bottom boat that mounts twin 1,200-hp racing engines with Mercury MerCruiser 6 Speedmaster outdrives, recently grabbed the world record by reaching 142.959 mph.) Cost: $18,830 (Pro Max 300X).

Yacht
Any sport fishing boat that’s actually received full American Bureau of Shipping classification and boasts a range of 1,200 nautical miles and a cruising speed of 26 to 28 knots has got to be a contender for honors as the most powerful yacht. Marlena, built by Trinity Yachts of New Orleans, is a 126-footer powered by a pair of British-built Paxman 12V185 diesel engines rated at 3,500 hp each. At top speed, Marlena can manage a respectable 31 knots, to help you keep up with the Joneses. Cost: $13 million.

Tugboat
International in scope but American under the hood, the most powerful ocean-going tugs are being built at the Yantai Raffles Shipyard in China for Tidewater Marine of New Orleans. The J.T. Laborde will be the first of five “anchor-handling” tugs designed to move offshore oil platforms. It’s being outfitted with four 6,000-hp diesel engines supplied by GM. The combined 24,000 hp will drive an AC generator that powers an electric drive motor. Cost: $30 million to $35 million.

Bulldozer
The Caterpillar D-11 tops even the legendary D-9, with operating weights in the 230,000-to-248,000-pound range and a Cat-built diesel engine that develops 850 hp. Enough to shove most anything. Cost: about $1.5 million.

Battle tank
The U.S. Army’s Abrams M1A2 upgrade of the Desert Storm winner is powered by a 1,500-hp Honeywell gas turbine. That doesn’t sound like a whole lot of power to move a 69.5-ton vehicle, but it does spool up some 3,885 pound-feet of torque-and that’s what counts in heavy-armored circles. Limited by governor to 43 mph on level ground, the M1A2 can ascend a 10 percent slope at 17 mph. How’s it drive? Sgt. First Class Donald Torrance, a master gunner with six years’ experience in the M1A2 at all four crew positions, including commander and driver, spent 100 hours in an Abrams with the 467th Armored Battalion during Operation Desert Storm. “Absolutely fun to drive,” he says. “The throttle is on the right hand grip, just like a motorcycle throttle. The turbine sounds like an aircraft engine. When you hit the gas, there’s a slight lag. So in battle situations, you keep it at high idle, called tactical idle, so you’re ready to go.” Cost: $5.9 million.

Mining truck
When a truck has a stairway that leads up the radiator to the cab-or should it be called the bridge?-and is built for a 360-ton payload, significant horsepower is under the hood. The Caterpillar model 797 is powered by Cat’s 3508 turbo-charged diesel producing 3,400 hp. Even loaded with ore, it has a top speed of 40 mph. It’s an awesome and unstoppable vehicle, a half-million-pound mountainside on wheels made for hauling mountainsides away. The 797 is the world’s largest and most powerful off-road hauler, but a horsepower race is shaping up: Detroit Diesel is now testing a rival 90-liter 3,620-hp V20 engine that will be installed in mine trucks built by Euclid-Hitachi, Liebherr Mining Equipment Co., and Terex Mining. Cost: about $3 million (Caterpillar 797).

18-wheeler engine
It’s a tie between two powerplants that propel a high percentage of the serious Kenworths, Peterbilts, and Freightliners that blow past you in the fast lane. These engines, by Cummins or Caterpillar, each produce 600 horses and 2,050 pound-feet of torque. Fleet operators favor smaller and more economical engines, but 600s are the motors of choice for many owner-operators, for whom time really is money.

Clair Zimmerman, a veteran driver (since 1959), runs a Cummins Signature 600 in his 1999 Kenworth W900L, hauling fresh and frozen food in a 48-foot refrigerated (“reefer”) trailer. Zimmerman always buys the rig with the biggest engine going. “I spent the big dollars to move up from a 525-hp engine,” he says. “About $8,000 extra.
I love the big power. You just float down the highway with it.
I don’t have to shift as much with big power, so there’s less wear and tear. I can maintain 65
mph wherever I’m at.”

POWER ON THE TRACKS

Passenger train
Amtrak’s high-powered people-mover on the Boston-Washington corridor is the Bombardier/Alstom HHP-8, an electric locomotive that develops a steady 8,000 hp. Rich Del Bono, a 28-year veteran engineer, describes driving the HHP-8:
“I set (the speed control) for 125 miles per hour and just increase the throttle ’til I’m there.” Cost: $8 million. 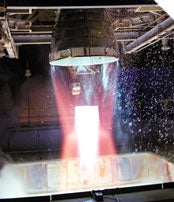