Who Killed the Electric Car? Not the Army 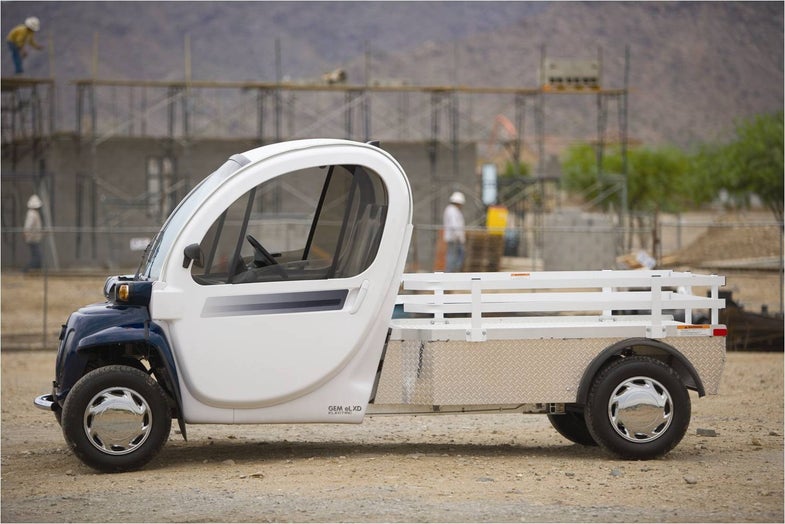 One of the 4,000 neighborhood electric vehicles the Army has acquired. US Army
SHARE

Soldiers may soon get greener rides on-base, after the U.S. Army announced the acquisition of 4,000 neighborhood electric vehicles.

The plug-and-chug vehicles come in both sedan and light truck models, and can charge their batteries at any three-pronged household outlet. Estimates put the savings over a six-year service lifetime at 11 million gallons of fuel, not to mention 115,000 tons of carbon dioxide emissions.

“We estimate the cost of charging an electric vehicle in a given year at $400, which is a substantial savings from the fuel that would be purchased for a petroleum vehicle,” said Paul Bollinger, deputy assistant secretary of the Army for Energy & Partnerships, during a Department of Defense bloggers roundtable on Monday.

Total savings on the vehicles: $45.8 million over six years.

This doesn’t represent the first time that the Army has sunk substantial investment into energy-efficient vehicles – it has snapped up 40,000 alternative fuel vehicles to date. But a lack of alternative fueling stations led to the decision to skip over hybrids and go directly to electric.

The Army does not stand alone in deciding to jump to electric vehicles – Popular Science talked with U.S. entrepreneur Elon Musk about his efforts with Tesla Motors to develop a viable electric car.

Six of the electric vehicles have arrived at Fort Myer, VA, to be followed by 800 more this year. More will continue to pour into Army bases over the next two years, courtesy of Chrysler subsidiary GEM and possibly some other car manufacturers.

No one’s going to be tearing around at high speed yet, given the 25 mph speed limit on Army bases and the limitations of the electric vehicles. But Bollinger said that manufacturers want to produce road-speed electric vehicles for the Army that could travel off-base.

If this and the North American International Auto Show are any indication, it seems like the electric car may still have a future. Bollinger stated that the Army hopes its acquisition will “drive battery technology in the future,” and noted that a Navy captain had told him the Navy wants to follow in the Army’s footsteps.

“Now, if the Air Force piggybacks it, I mean, you may be talking potentially 40[,000] or 50,000 vehicles purchased by the military,” Bollinger said. “If that doesn’t create a market I don’t know what does.”