Soldier of the Future

Blending in with brick walls 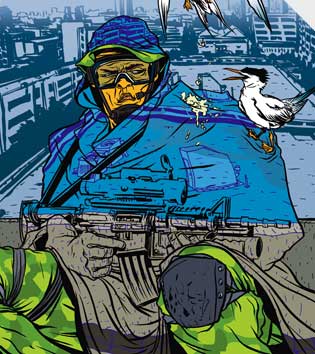 A reader inquires: Is the military developing uniforms that would make soldiers invisible?

The perfect cloak of Frodo Baggins is still far off, if not impossible, but DARPA-funded researchers are working on a new kind of camouflage that would fall only a few steps short of elvish magic. According to Philip Moynihan, a NASA engineer who published a paper on the subject in 2000, so-called adaptive camouflage would visually merge soldiers with their surroundings–whether that’s an urban backdrop or dense jungle brush. The basic principle is simple: Cameras would capture the scene behind the uniform while embedded displays would reproduce the image on its front.

With combat shifting increasingly to urban environments, the need for adaptive camouflage is stronger than ever. Today’s uniforms can be a hazard: A soldier in desert fatigues would stand out like a bull’s-eye against a red brick wall. But the next-generation suit would take on the appearance of the wall, allowing the soldier to blend into the background. In the same way that an enemy scanning jungle brush might miss a soldier in classic green-and-brown camouflage, the uniform’s optical trickery might cause an urban foe to glance over the future soldier. “Sometimes it’s fairly easy to confuse the human eye,” Moynihan says, explaining that the real goal is not invisibility but simply buying a soldier extra time to react.

DARPA isn’t exactly sewing together uniforms just yet–the project is still in its very early stages, and details are scant. “They’re doing the research,” Moynihan says, “investigating the principles involved.” But Moynihan has no doubts about whether adaptive camouflage will be a reality for the soldier of the future. “It’s just a matter of when,” he says.