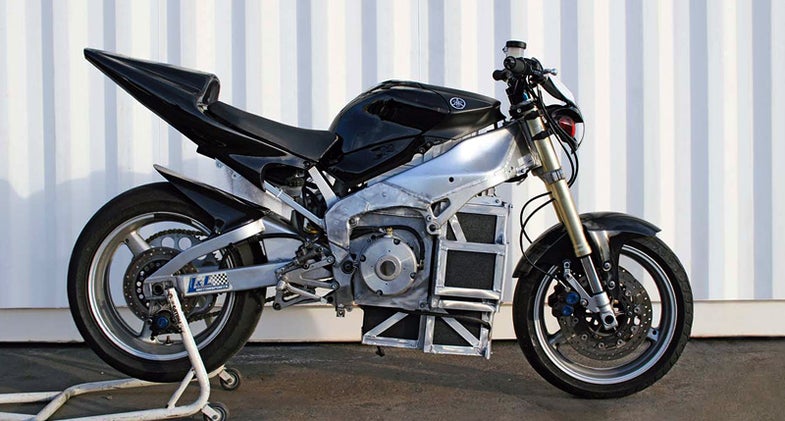 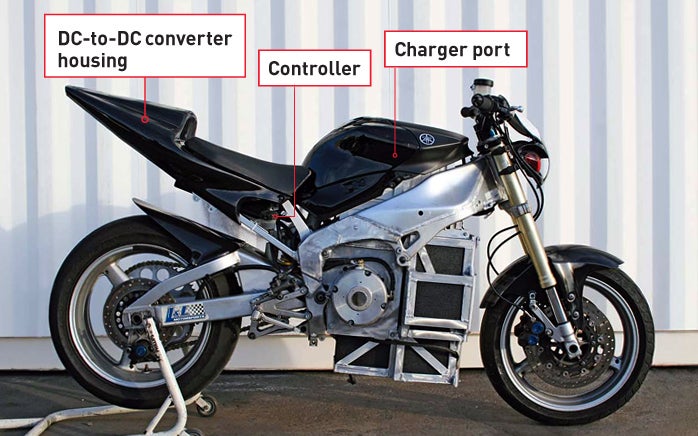 Among his other unusual hobbies (he also builds sculptures featuring fire-spewing robots), 32-year-old Justin Gray makes custom electric motorcycles. To create his latest drag racer, the R144, Gray tore the motor and gasoline systems out of a 1999 Yamaha R1, a bike with a frame large enough to hold the extra parts he needed for the conversion. Since the gas engine had been an important structural element in the original bike, he built his own aluminum motor bracket to hold the modified bike together.

Forty-eight lithium-iron-phosphate batteries feed power into the motorcycle’s controller, which determines the rate at which electricity travels to the motor. The result is 420 pounds of unusually quiet motorcycle, with 100 horses and a top speed of 150 mph.

DC-to-DC Converter: Power-drawing accessories like the headlights don’t need anywhere close to the amount of current emitted by the enormous battery pack. So Gray performed some surgery, bypassing the motorcycle’s original charging circuit and modifying the wiring harness so it could accept a 12-volt signal from the converter. He also removed unneeded engine-control parts like the oil sensor and the gas gauge.

Battery Pack: Each of the 48 3.3-volt, 50-amp-hour cells weighs half as much as a lead-acid battery. Besides having a much smaller ecological footprint, the lithium-iron-phosphate cells are safe as well. “They don’t have the high energy density of lithium-ion [batteries],” Gray explains. “But they also don’t explode randomly.”

Controller: Gray used a Curtis 1231- model controller, which is commonly paired with the motor in Porsche 914 electric vehicle conversions, to move the power to the motor. He has turned down the rate at which it throttles up, because the intense acceleration at its maximum rate of 550 amps is “a little scary” for the rider.

Motor: The 60-kilowatt series-type motor turns a chain connected to the rear wheel. In proportion to how hard the rider hits the throttle, the controller modulates the current delivered to the motor. Although the manufacturer says 144 is the maximum voltage the controller can handle, Gray pushes it well above that for higher performance.

Charger: The bike plugs into a charger via a port located just underneath where the gas tank had been. Designed to solve the challenge of powering up 48 separate batteries without damaging them by overcharging, the charger takes just four to six hours to juice up the bike, which can go 60 to 100 miles on a single charge.

Gray’s isn’t the only electric racer, turn the page to check out two more. 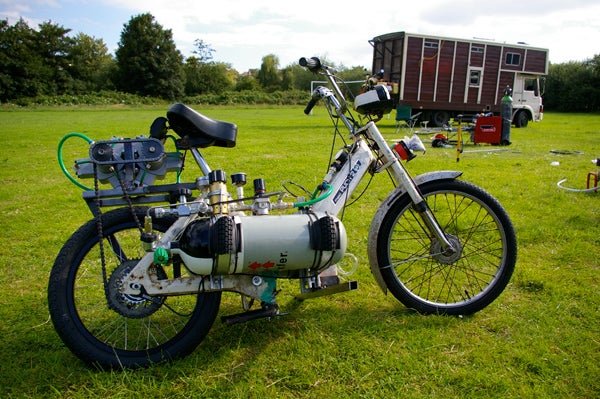 To design an environmentally responsible moped that could be used to make short deliveries, English TV host and engineer Jem Stansfield settled on air tanks as his power source. The carbon-fiber tanks—only about five pounds each because they were made for firefighters’ breathing apparatuses—power two compressed-air motors, giving his low-revving vehicle a range of seven miles and a top speed of 20 mph.

The air compressor it uses requires juice from an outlet but can refill the tanks in seconds. Stansfield also replaced the back wheel of the original moped with a BMX wheel and, to increase its efficiency, added the hub gear system from a bicycle so it could run in a range of gears. 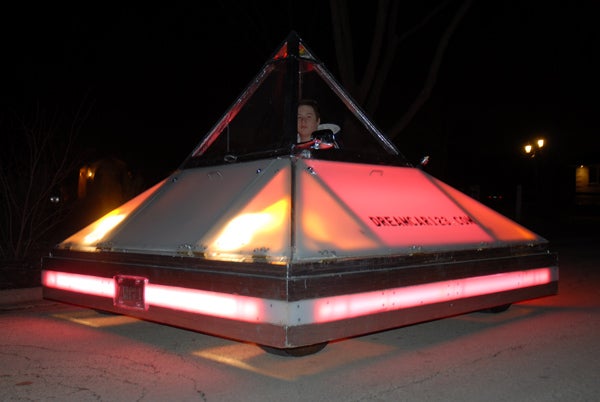 With a body that’s a cross between ancient Egypt and the vehicle from Woody Allen’s Sleeper, the 6,000-pound Dream Car 123 is not your run-of-the-mill electric vehicle. Inventor Greg Zanis, who had imagined building a pyramid-shaped car since he was a young boy, sits inside, enclosed behind bulletproof glass. The heavily reinforced base contains 80 lead-acid batteries that drive the four motors (one in each wheel). The current version of the Dream Car travels 240 miles at a top speed of 45 mph, after charging for 3.5 hours on only about $5 worth of electricity.

Check out PopSci‘s complete coverage of the future of the environment at popsci.com/futurecity.

Cars
future of the environment
july 2008