Does Death Valley have a wild ass problem?

The national park’s exotic donkeys might not be the nuisance we thought they were. 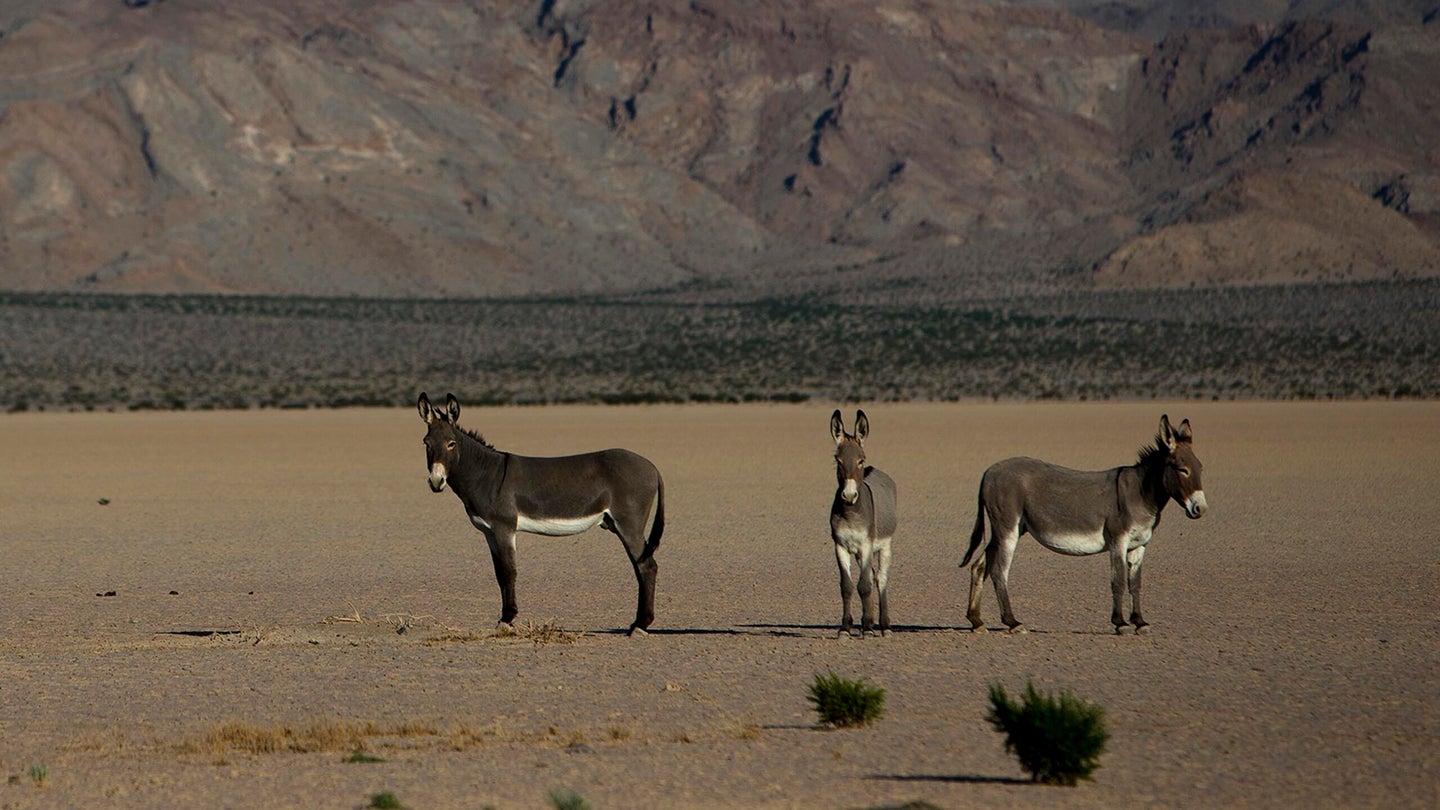 Death Valley National Park is stunningly barren. Silt hillsides crowned with rock and scree give way to dry streambeds and barren salt flats, the air dancing under a pitiless sun. The largest park in the lower 48 states, it contains the lowest elevation point in the country—nearly 300 feet below sea level—and has set the global heat record. It’s a place that seems utterly antithetical to life, certainly not the sort of terrain where you’d expect to find a thriving population of wild burros.

Yet there are thousands of them in Death Valley, clustering for the most part around natural springs and park buildings.

Burros—known variously as donkeys, African wild ass, or Equus africanus asinus—are the largest animals in the park. They’re also relatively recent arrivals, introduced in the 1800s. And they’ve flourished to the point where they’ve been deemed a nuisance by the National Park Service, as they bulldoze through scarce water and vegetation resources, digging up riparian environments and crowding out native species.

“They have no predators and no disease essentially, and so their numbers continue to increase exponentially,” says Josh Hoines, the former chief of resources at the park. A growth rate of 20 percent a year “is really the low end of what I’ve seen published.”

At first glance, the burro problem seems like a cut-and-dried example of “invasion biology,” a conservation subdiscipline that focuses on the destructive impact of non-native species—from cats and rats that wreak havoc on island ecosystems to Asian carp and zebra mussels that clog inland waterways. But for Erick Lundgren, a biologist at the University of Technology Sydney studying their ecological impact, the burros of Death Valley represent a remarkable case study in resilience and potential adaptation, and are part of a far more nuanced debate about how novel ecosystems can evolve under our noses.

“I think we can get better results by focusing on protecting apex predators and landscape connectivity instead of trying to turn back time and remove wild burros,” he says.

There was a time when the burros were considered indispensable. In the late 1800s, mining towns spread throughout the Southwest, pulling mineral wealth out of places like California’s Death Valley. In the absence of internal combustion engines, something had to help grind the rocks and ferry supplies, and burros became a vital work force. But as claims ran dry and mines closed, miners released them into the desert.

In the 1930s, managers at Death Valley National Monument—the precursor to the park—began trapping and culling burros, with full-scale removal efforts ramping up whenever populations got particularly large. While a 1971 federal law forbade the hunting of mustangs and burros and set aside tracts of land under the Bureau of Land Management for both, Death Valley and other federal parks have tried to keep the populations as small as possible.

In 2002, the park adopted a management plan with the goal of eventually removing the entire population through partnerships with non-profits like Peaceful Valley Donkey Rescue, which trap burros and offer them for adoption. The last roundup was in 2005. According to Allison Ainsworth, a biologist with the park, burro populations in the park have since risen to an estimated 3,000.

“We’re always going to have burros,” says Ainsworth. “We don’t have fences in the park and we’re surrounded by herd management areas of BLM land, which are required by law to regulate wild horses and burro densities.

At the same time, she added, “Death Valley is a national park and we’re mandated to preserve the native species, which the burros are in competition for limited resources with.”

This kind of argument is standard in the discussion of exotic species, says Mark A. Davis, author of “Invasion Biology.” “Non-native species force you to start making decisions about what kind of ecosystem you want and what your values are,” he says. “They aren’t a change from some iron-clad [environmental] truth, and it’s not really scientific to act like they are. ‘Unhealthy’ or ‘healthy’ usually just means ‘desirable or undesirable,’ and we should be up front about that.”

From the beginning, according to Lundgren, the scientific literature on Southwestern burros has assumed they are undesirable, and has emphasized the damage they cause. Burros tend to dig groups of wells in dry streambeds, some of which can go as deep as five feet, to get at groundwater. Photographs of these wells have been used as evidence of negative burro impact, Lundgren says. But as far as he knows, well-digging behavior and its impacts in Death Valley have never been the subject of formal scientific research.

Lundgren began noticing the well-digging behavior in 2012, and actively studying it in 2015. Initially funded by a small grant from Arizona State University, Lundgren raised a further $4,600 via crowdfunding to pay for trail cameras, which he and undergraduate students began placing around Arizona field sites like Bill Williams River. Their findings suggested that abandoned burro wells serve as germination nurseries for cottonwood and willows—keystone tree species in the Southwest—and as water resources for native amphibians, insects, and mammals.

In 2018, Lundgren turned his attention to Death Valley. Unlike the seasonal streambeds throughout the Arizona deserts, most of the water in Death Valley leaches out of hillsides of silt soil, fueling thick stands of vegetation on the slopes. The resulting springs are “strange and magical places,” he says, starkly isolated groves of densely packed willows and cattails, with game trails leading into the thickets opened up by foraging burros. So far, his cameras have caught migratory and resident birds, bobcats, coyotes, and foxes drinking from the wells.

“You go out to these sites and the only surface water are these excavations by wild burros, where they’ve dug out the soil and vegetation to make pools,” Lundgren says. “And it’s really the only water in many of these landscapes. So my first question is: What happens when you remove the animals keeping these wells open?”

One possible answer lies in the surface springs of Nevada’s Ash Meadows National Wildlife Refuge, a desert-wetlands preserve on the edge of Death Valley, where the majority of burros were removed in the 1990s. “One of the requirements for [the springs’] persistence is some level of disturbance,” says Astrid Kodric-Brown, a biologist with the University of New Mexico. “That disturbance may initially have come from Pleistocene mammals, she says, and later from management by Indian populations. “Exotic” herbivores like burros seem to be ensuring the springs stay open, she says, though it’s healthiest for the ecosystem at large if they don’t linger for too long.

According to Kodric-Brown’s research, the springs were rapidly choked by fast-growing cattails and reeds following burro removal, destroying open-water habitat for endangered native fish populations. As a result, Lundgren says, “Land managers there go and manually remove wild vegetation, doing exactly what the burros were doing for free.”

These kinds of unforeseen consequences are common in conservation land management, Davis says, and the onus for environmental damage tends to be placed on non-native species rather than other factors that might be amiss in the ecosystem, like the absence of predators.

Predation is an under-studied aspect of burro ecology, Lundgren maintains. Several publications have pegged burro population growth directly to birth rates, without recording how many foals actually survive to adulthood. “Only three of 10 peer-reviewed demography studies on horses and burros mention if there are predators in the system or not,” Lundgren says. “The lack of predation is an assumption that’s carried around without anyone explicitly testing it.”

In the course of the 2018 and 2019 field seasons spent monitoring Death Valley field sites in areas like Willow Canyon and Mesquite Spring, Lundgren says he has found considerable evidence of predation: around 33 burro carcasses in the riparian vegetation, half of which he characterizes as undeniable kills from mountain lions. (The other half are less conclusive, but were found in close proximity to lion scat and tracks.)

Some mountain lion trails contain skeletons from two or three burros, he adds, and the dense vegetation that springs up in the groves during the growing season may be hiding more remains. While such kills might be attributable to just a few lions, Lundgren argues, they might also be a signal that the lion population is adapting to target the largest available prey in the ecosystem, which would provide a natural check on burro populations. Some studies suggest that high levels of mountain lion predation essentially negate population growth in some wild horse herds.

In order for this kind of natural check on burros to work, Lundgren points out, lion populations have to be healthy. In some areas of Nevada where burro populations are skyrocketing, mountain lions are shot at a certain age to protect bighorn sheep or livestock, he adds, meaning that cubs often don’t have exposure to more challenging prey. The young and inexperienced lions that remain have a hard time going after wild burros. In addition, burro herds in the park tend to shield themselves by clustering around areas of heavy human habitation, which lions tend to avoid. All these factors make it appear as if the burros have no predators, Lundgren says, but actually point to a more complicated dynamic.

It’s possible that some of the behavior decried in wild burros—well digging, for example— may have been present in America’s Pleistocene horses, camels, and rhinos, which went extinct long before Europeans re-introduced equids to the West. In 2017, Lundgren and several colleagues published a paper arguing that exotic animals—including burros—are filling important roles in ecosystems that Ice Age extinctions left bare. “We’re looking at a system where the big animals were already killed by humans,” Lundgren says. Adding big animals back into modern ecosystems changes them in ways we aren’t used to, he argues, and some of the changes “are actually a restoration to the way the world must have been for 15 million years.”

“Places like Death Valley are extremely low-productivity systems, and are pretty water-limited and forage-limited,” says Erik Beever, a research biologist with the U.S. Geological Survey who has worked on the long-term impact of burro and cattle removal in the Mojave Desert. He says that while he’s interested in evaluating Lundgren’s research when it comes out next year, he’s also cautious about ascribing benefits to the burros’ presence. “I think looking holistically at this issue—the comparatively low resilience of the system should be measured against the gains [burros provide.] As with nearly all issues in biology, it’s very context-dependent, so they may be more helpful in some years than others.”

It’s a complex issue, in other words, and one Lundgren believes requires deeper study. There is no question that burros are having a direct impact on Death Valley’s ecosystems and that they are doing so under a management paradigm that sees any impact as problematic. His question is whether there are alternate methods of managing the burro population that don’t require rounding up surplus animals. (The park’s next set of trapping and adoptions, once again in partnership with Peaceful Valley Donkey Rescue, is set to take place this month.)

“There’s an opportunity here to tell people a really interesting story about the dynamism of nature and deep time and ecological change, as opposed to this simplistic black-and-white story that exists in our minds,” Lundgren said. “I think that the idea that these organisms are evolving and responding to each other in this novel system is just so interesting and beautiful, and much more optimistic as a vision of nature, than this fragile native space that needs to be protected.”

Asher Elbein is a writer based in Austin, Texas. His work has appeared in The Oxford American, the Texas Observer, and The Bitter Southerner.