Buildings of the future might be constructed by swarms of robots 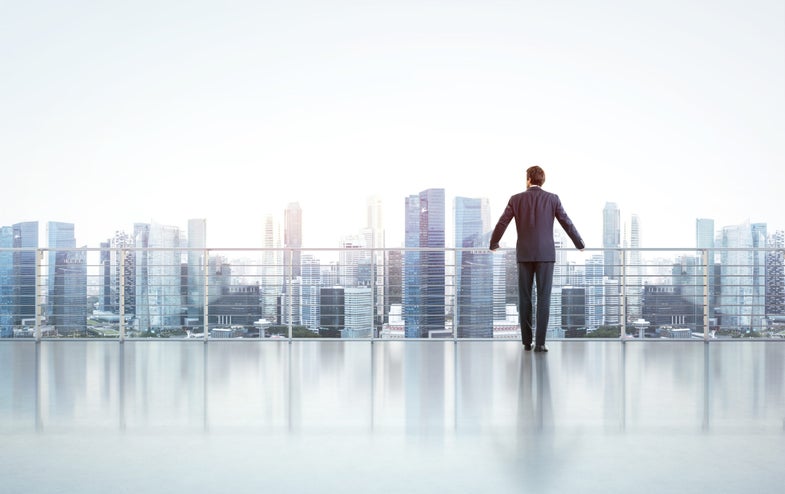 The following is an excerpt from Soonish by Kelly and Zach Weinersmith.

Thanks to recent advances in robotics, computing, and other technologies, a small but growing number of scientists and engineers think robot-made housing might finally be possible. In fact, not only is it possible, it may be far better. Robotic construction may increase the speed of construction, improve its quality, and lower its price.

There are a number of ways this could work, including giant gantries that behave something like 3D printers, and robotic arms on wheels that might directly replace construction workers.

Personally, we’d like a giant robot to build our house, largely because the phrase “a giant robot built my house” contains the phrase “giant robot.” But the giant approach may not be the ideal way to go. Even a (merely) truck-sized robot might be a bit cumbersome around a construction site. Plus, when you have a single large robot that does everything, if that robot breaks down, you lose your ability to do anything.

What if instead of a small number of large robots, we have a large number of small robots? Robot swarms, like insect swarms (and humans for that matter), can build structures far larger than themselves. With a giant gantry system, the house can be no taller than the height of the gantry. Swarm robots can just keep crawling or flying up, building structures far larger than the individual small robots in the swarm.

Some of these construction-oriented swarm robots take their cue from biology. In the research of Dr. Justin Werfel of Harvard, and Dr. Kirstin Petersen, formerly at Harvard, now at Cornell, the bots were inspired by termites. According to Dr. Petersen, “They build some of the tallest structures in the animal kingdom compared to the size of the individuals. Think many orders of magnitude, thousands of times bigger than the individual. If we could do that, hundreds of people could build the Eiffel Tower but without a single coordinated sketch. That would be amazing.”

Dr. Werfel and Dr. Petersen collaborated on this project but came at it from very different angles. Dr. Werfel writes the programs that specify the rules the robots will follow, and says things like, “We’re trying to figure out essentially what program the termites are running.” He points out that termites are “hella complicated” and we don’t really know what rules they’re using, but his job was to write a simple program inspired by what termites can do. Dr. Petersen designs and builds the termite-inspired robots and says things like, “The robots are recognizable because they have these Whegs—wheel leg type of things that make them much better at climbing in a very simple fashion.” Whegs, friends. Whegs.

The whegtronic (our word, not hers) robots pick up specially made bricks, which they take to the appropriate location and drop off in order to build up large structures. This is already pretty awesome, but what makes them especially interesting is that they act independently. The swarm has no central coordination, and no members of the swarm are aware of what the other members of the swarm are doing. Each robot grabs a brick, then determines where to put it using a small set of instructions.

Researchers at the Institute for Advanced Architecture of Catalonia are also creating a swarm of structure-building robots. They created “Minibuilders.” Minibuilders are basically little 3D printers, about the size of a laundry hamper, that deposit a concrete-like material in layers. Imagine robot turtles with attached nozzles for concrete.

Okay, so they’re not completely independent. You can’t have a concrete-rolling vat inside each of a dozen small robots. The Minibuilder bots are each attached to a central concrete vat that supplies them. If it helps your robot fantasy, just imagine it’s a giant, horrifying tentacle bot. The big downside to having a tentacle bot build your house is that the tentacles get tangled. Imagine the tangle behind your desk right now, only all of your peripherals are running around spewing concrete. In the current Minibuilder setup, as far as we can tell, the roboticists have to run around to help the Minibuilders avoid getting tied up into each other.

We find these robots especially interesting because they combine the idea of the swarm construction bots with 3D printing. Also, one type of Minibuilder can use a vacuum to suck itself onto the side of a structure, climb up, and build more, which is just awesome.

But let’s face it—having a swarm of independent 3D printing robots building you an inexpensive work of art to live in is going to get boring after a while. How about flying quadcopter bots?

Dr. Fabio Gramazio and Dr. Matthias Kohler run a mad science lab in Zurich, where robots build pretty structures and building facades. One particularly cool project they did involved a collaboration with Dr. Raffaello D’Andrea, who focuses on making terrifying armies of flying drones. The drones in their project picked up bricks coated with a binding agent and dropped them one by one until they formed a structure. Okay, yeah, you don’t wanna live in a house made entirely of sticky bricks yet, but this is an early proof of concept.

Because you have a horde of flying bots, you can have them place each brick precisely, making complex structures or interesting patterns. But in order to do this, you have to have a motion-capture camera system observing them while they build and telling the drones what to do. This is fine in a lab, but may be somewhat difficult to move outside.

One virtue of the swarm paradigm is that the individual bots are relatively expendable. So if a job is particularly dangerous (imagine building right after an earthquake, or in a hazardous environment, like New Jersey), a large number of small bots might be preferable to either humans or large construction machines. Perhaps in the future some combination of flying and ground-based robots will appear in your yard like reverse locusts, leaving you a nice gazebo before they pass on.

Or, a bit more usefully, we can foresee a day when sanitation, electricity, water, and shelter are restored far faster, far cheaper, and far more safely to disaster areas. And, perhaps it’ll all be thanks to a couple geeks who spent way too much time gazing at termites.