Researchers just figured out how to get robots to join forces

We're so close to the megazord of our dreams. 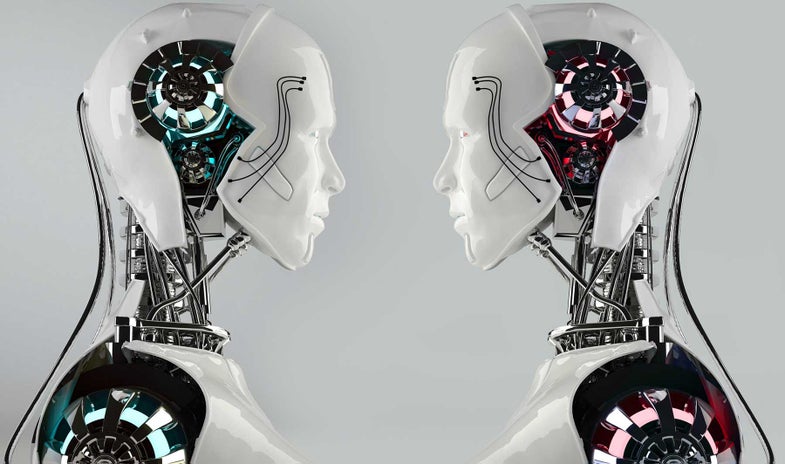 Power Rangers had Megazord. Voltron had, well, Voltron. Individual robots that combine to form one larger, cooler—dare we say, more badass—automaton have been a mainstay of science fiction for decades. But a new study in Nature Communications suggests that morphing robots may finally outgrow the limits of fiction and find their way into our reality. The researchers were able to get autonomous modular robots—robots that have the ability to control themselves, like the Roomba vacuum cleaner—to join forces and make one cohesive megabot. The future is now.

Researchers who study swarming insects like termites and ants know that these animals can accomplish things in coordinated groups that they could never manage on their own: carrying large objects, taking out predators, and creating intricate structures. Termites in particular are known for their prodigious ability to build complex homes, or termite mounds, without a blueprint. Swarm robots could potentially do the same.

“Take moving on a very rocky terrain, for example,” says lead author Marco Dorigo, a research director at IRIDIA, the artificial intelligence lab of the University Libre de Bruxelles. “One alone would get stuck, but attached to each other they become more stable and they can move on the rough terrain.”

A single powerful robot needs a redesign every time users come up with a new task for it; a bot built for building things can’t be expected to pivot to search-and-rescue missions. But swarm robots can be more flexible. They’re also less fragile, en masse, than one large bot, and they’re easier to make in large quantities. At the same time, robot swarms provide something a single robot can’t—redundancy.

“Since the swarm is made of many robots, if some of them break down, the others can continue to work,” says Dorigo. It’s the equivalent of investing in a whole block of decent kitchen knives instead of spending the same amount on one absurdly good vegetable peeler.

The problem, however, has been figuring out how to get the autonomous robots to act more like team players. The typical approach has been to program the robots for self-organization, which is how ants and termites operate, so that the bots can make decisions based on local information about their personal surroundings. But that’s a tricky thing to program. Another alternative is to use a kind of central control, where one computer somewhere knows everything about each robot and then makes decisions for each of them.

“The problem with this is that there are communication bottlenecks, in that there’s a single point of failure,” says Dorigo. “If the central computer doesn’t communicate correctly, or if it breaks down, the whole system doesn’t work anymore.”

It’s kind of like building a Death Star with a thermal exhaust port which, if hit with a torpedo, creates a chain reaction that ignites the main reactor and destroys your whole ship. Oops.

Dorigo and his colleagues took something of a middle path. When wobbling around solo, the robots remain autonomous. But when they touch each other to form a bigger unit, they cede control to a single comrade in the swarm (the robot that continues to glow red in the video below). The mess of individuals becomes one single powerhouse—automatically.

Any autonomous robot needs a “brain” in the form of its Central Processing Unit (CPU), which controls its actions. It also needs the robotic equivalent of a nervous system connecting the CPU to censors and actuators. When two of Dorigo and his team’s bots come together, an automatic mechanism forces one to cede authority to the other.

“The one that is getting the authority becomes the brain of the new robot,” Dorigo explains. “The one that is ceding authority to it becomes part of the body. In this way, you’re building a bigger nervous system than was available before.”

This continues with each robot that is added to the system. And if the robot acting as the brains of the operation gets damaged, another simply steps in to fill the roll—a facet that the authors describe as self-healing.

When asked about the practical applications for the technology, Dorigo would not confirm that our future will be full of giant robot fights. But he did say that there will likely be military applications, so there’s always hope. More practically, our world is going to be filled with more and more autonomous robots—from smart vacuums to self-driving vehicles—and they’ll need to be able to coordinate their activities with one another. The method Dorigo and his team devised may be one way of doing that.

“The important thing is that the paper is not about these specific robots,” says Dorigo. “The robots that are presented in the paper are just one example. The paper is about the technology that makes the coordination and the self-healing that our robot displayed possible.”