A new kind of miniature robot can crawl on the parts of bridges humans never see. 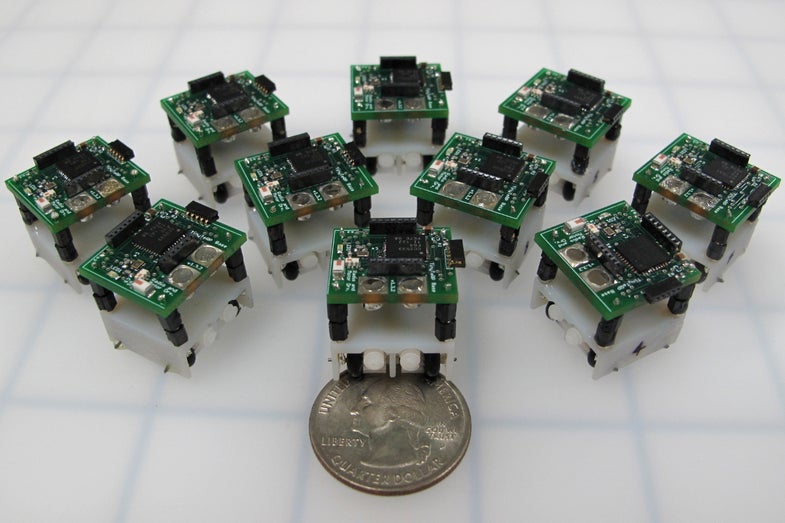 Ask Sarah Bergbreiter, a professor of mechanical engineering and head of the University of Maryland’s Micro Robotics Laboratory, about the connection between miniature robots and bridges, and she’s likely to talk about watching people climb the Harbour Bridge in Sydney, Australia.

“It’s insane. The rivets—they’re not flat. It’s hard to see anything be able to move around these understructures of bridges,” she says.

But along with fellow UMD professors Nuno Martins and Richard La, that’s exactly what Bergbreiter will have to do. They’re not coming up with a better harness or weird contraption to make it easier for people to scale bridges, however. Instead, they’re at the beginning of a three-year project, bolstered by an $850,000 grant from the National Science Foundation, to design, build, and deploy a swarm of miniature robots, each no more than several centimeters long, that will aid in bridge inspection by climbing on them, traversing the tricky terrain of rivets and bolts on their undersides, and working together with minimal input from a human controller to store and relay images and measurements related to the strength and stability of the bridges they’re crawling over.

“The vision is you could have a whole bunch of these guys running around a bridge,” says Bergbreiter. “I don’t think that’ll happen in three years, but I think we’ll be at the point where we can make a decision how far this can be commercialized.”

The average age of the American bridge is 42 years old—as good an age as any for regular check-ups. Inspecting any one of the approximately 605,000 bridges in the U.S. today is a tedious, hours-long task usually undertaken by a team of experts. Releasing 50 to 100 bug-sized robots in tandem with human teams would cut down on the amount of time needed to inspect a bridge and prevent the need to shut down a bridge to pedestrian and vehicle traffic. The idea is that these robots, once given a certain command, would be autonomous, moving around a bridge on their own and organizing together to examine various surfaces and take measurements. Designing such a robot would be a feat of ingenuity in dynamic movement as well as adhesion, and both are areas Bergbreiter has dug into since helping establish UMD’s Micro Robotics Lab in 2008.

“The key is being able to stick and crawl over bridge surfaces, whether they’re concrete or steel or painted steel,” she says. Bergbreiter says the adhesion technologies being worked on in the lab draw inspiration from the Spiderman movies as well as Tom Cruise in Mission Impossible. Picture a robot using electroadhesion to latch onto a bridge, or one the size of an earwig using little hairs, or “gecko adhesion,” to remain affixed to a rivet. “The key there is being able to turn it off and on,” says Bergbreiter. Add a tail or a flexible backbone, and you have a robot that will stick to a bridge and move easily from horizontal surfaces to vertical ones, and over structures like rivets that are far from flat. Bergbreiter says small projects using new adhesion tech and different mechanisms for movement have already been demonstrated in UMD’s Micro Robotics Lab.

As for relaying information useful for bridge inspections, the professors might be pulling from the Micro Robotics Lab’s TinyTerps, quarter-sized robots named after UMD’s mascot, the terrapin (terp for short), that can be thought of as tiny Arduino boards. “They effectively have a radio microcontroller, and you can plug different sensors on and off of it,” says Bergbreiter.

It’s soon to tell what these bridge-inspecting, micro-scale robots will look like or how, exactly, they will work. But Bergbreiter says that’s part of the fun of this new project.

“We’ve been working on big robots since the late ’50s and ’60s, and there’s a lot of amazing things that people have done in that area,” she says. But, she adds wryly, “There’s plenty of room at the bottom.”