But how does it taste with other fluids? Grapefruit juice? Motor oil? Liquid nitrogen? 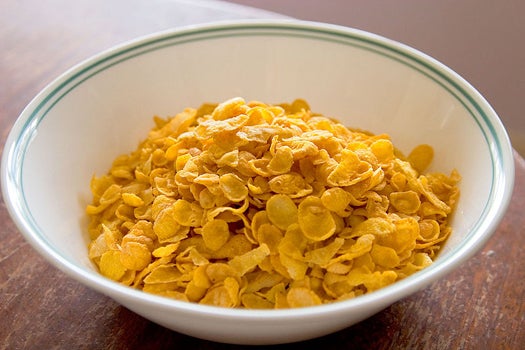 At Pontificia University Católica in Santiago, Chile, important work is being done. Sick of people repeatedly insisting that corn flakes are delicious when swimming in a bowl of tap water (I guess?), a team of researchers embarked on a remarkably thorough examination of the effects of different liquids–2% milk, skim milk, and water–on breakfast cereal (both corn flakes and quinoa flakes). This is a real study, and we at PopSci spent real money and real time to read it.

Here are the ten best quotes from this study, which appeared in Volume 76, Issue 3 of the Journal of Food Science.

1. From the abstract, the brief summary that appears before the full article: “Keywords: breakfast foods, microstructure, milk soaking, quinoa”

Read: This article will be crazy.

2. “Most consumption methods of breakfast cereal flakes (BCF) involve mixing the flakes with milk of varying fat contents. Liquid uptake by breakfast cereals in the bowl is a relevant factor for consumption and acceptability, as it influences the texture and integrity of flakes. These changes could be expressed as a reduction in the force needed to disintegrate the flake as the soaking proceeds, a change that may be ascribable to alterations of its microstructure.”

Read: People put milk on cereal, because it tastes better.

3. “According to Pittia and Sacchetti (2008), intermolecular interactions in the flake’s matrix could be weakened by the plasticizer [water], leading to the solubilization of some components, and to a decrease in mechanical integrity.”

4. “The cell-wall material density of a flake (ρS in g cm−3) was determined with a Helium picnometer (Accupyc 1330 series N◦ 2441, Micrometrics Instruments Inc., Norcross, Ga., U.S.A.) with a volume module of 12.03 cm3 and employing approximately 2.90 g of QF [quinoa flakes] and approximately 1.27 g of CF [corn flakes]. The density of the flake (ρf in g cm−3) was determined through the relationship between the individual weight and its volume (cm3).”

5. “Each type of flake was placed into a ceramic bowl and liquid nitrogen was poured on top to rapidly freeze the sample, thus minimizing adverse effects on the microstructure.”

6. “Cold temperature was chosen in light of the high frequency of cold breakfast cereal consumption (Ganji and Kafai 2004).”

Read: Here we cite a study that tells us that corn flakes are typically served cold. 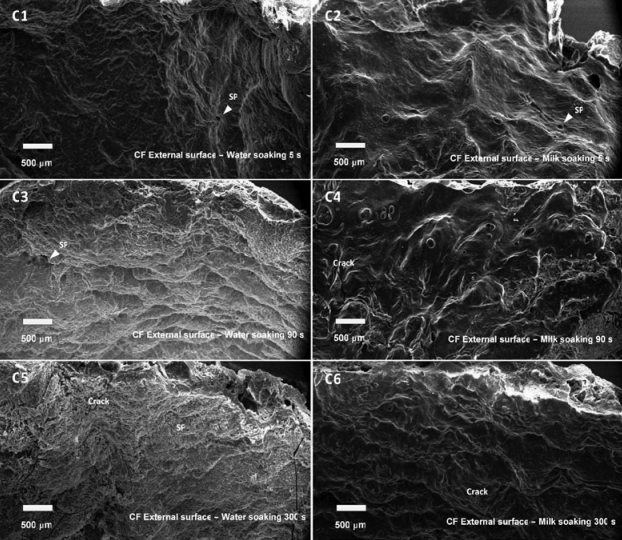 8. “Data and models showed that the RF [sogginess level] for BFP [haha, “breakfast flake products”] was lower when the flake was immersed in water than in milk. Sacchetti and others (2003) and Medina and others (2010) have suggested that during immersion in whole milk it is possible that a layer of lipids and casein micelles is deposited on the flake’s surface, which hinders liquid transfer into the interior, thus, retarding softening of the matrix.”

Read: Now we’re getting to it. Milk’s fat content shields the cereal from absorbing too much liquid!

9. “Considering that texture is the sensory and functional manifestation of the structural, mechanical, and surface properties of foods detected through the senses of vision, hearing, touch, and kinesthetic (Szczesniak 2002), it is important to study the textural perception of BFP by understanding the dynamics of the product in the consumer’s mouth as determined by their initial structure (Szczesniak 2002; Lenfant and others 2009).”

10. “The cross-sections of CF revealed an internal porous structure composed of several rounded air cells of different dimensions as reported also by Gondek and Lewicki (2006). Some large air cells protruded almost into the surface and were separated from it by a thin layer while other smaller air cells were embedded within a thick and dense solid matrix. Air cells seemed to be distributed within this continuous matrix.”

Read: Dude, have you ever looked closely at a corn flake? Like, really_ closely?_

You can read the article’s abstract, or purchase the full thing, here.