PopSci’s Friday Lunch: a Can of Surströmming With Harold McGee 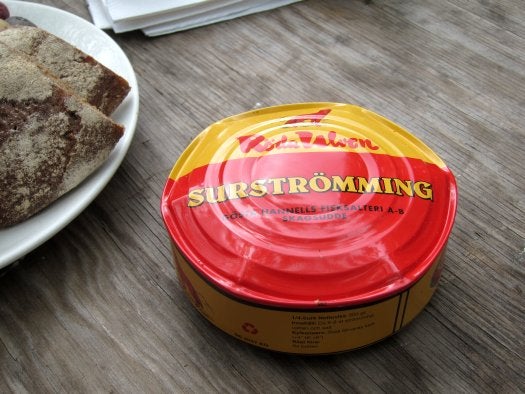 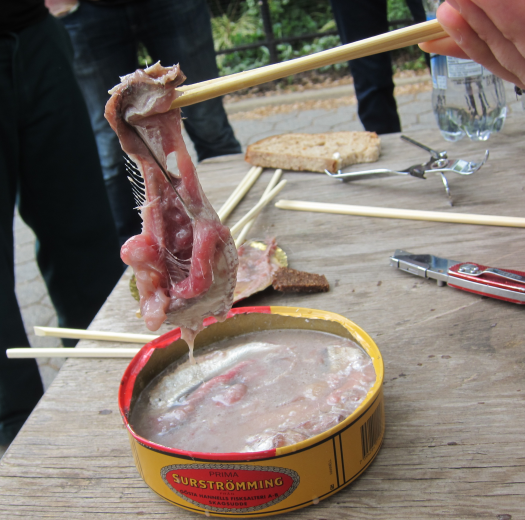 When Popular Science was acquired by Sweden’s Bonnier Corporation in 2007, some people thought we’d be eating surströmming, the legendary Scandinavian delicacy of fish left to ferment in cans till the cans almost burst, every day. But in fact, the famously putrid herring has been utterly absent from these shores — until today, when Dave Arnold invited me to come crack open a (ominously bulging) can of it that he’d smuggled back from Sweden. Scientific curiosity demanded that I investigate.

Joined by Harold McGee and several other Friends of Dave with assorted degrees of gameness, we cracked the can open in a well-ventilated park. It didn’t squirt vile juices for meters, as I’d been told to expect; just fizzed and bubbled a little as the noxious gases vented from their confinement. The air filled with the odor of used diapers; perhaps used diapers at the seashore. The flavor molecules in surströmming include skatole — named for the Greek word for dung — as well as ammonia, hydrogen sulfide, and a couple named putrescine and cadaverine that are also found in decaying corpses.

Dave and McGee were the first to tuck in. Dave, it is safe to say, survived the experience; but McGee — the only one of us who’d eaten surströmming before — thoroughly enjoyed it. “It doesn’t have any of the vomit flavor that the last batch did,” he mused.

I enjoyed it too, after a moment’s acclimation. The eye-watering sulfurous odor — like rotten eggs and raw onions — and the unchanged-baby odor predominated, but the salty deliciousness of cured herring came through. Especially on a piece of dark bread with some sliced red onion, the experience was more like eating cured fish while sitting next to a dumpster than eating actually rotten fish. The anaerobic fermentation (by Haloanaerobium bacteria that can survive in a brine salty enough to kill deadly Clostridium) gives it a slippery, disintegrating texture that’s somewhat alarming, but on the whole I would do it again. Here’s to you, Jonas Bonnier!