With more than 90 percent accuracy 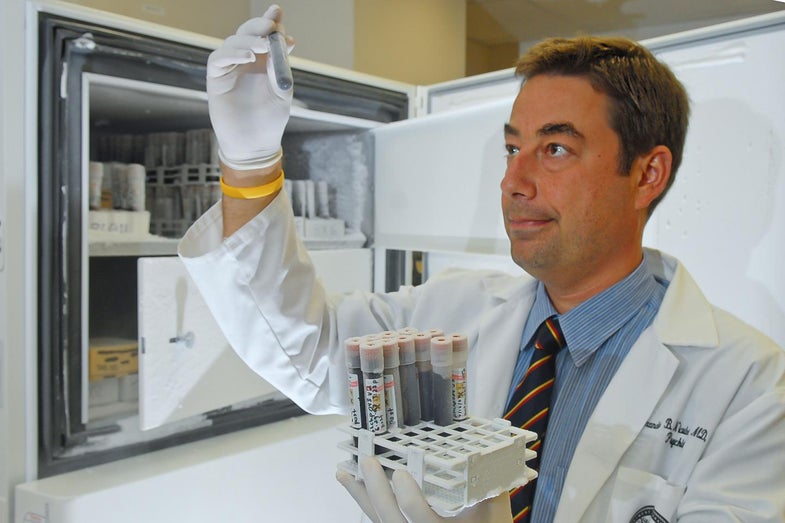 Researchers now have a more sophisticated understanding of mental health, and many are trying to take that understanding to the next level by predicting human behavior. Though this idea is worrying to some, many mental health experts see these predictive tools as a way to intervene with treatment before a patient has taken irrevocable action—like suicide. Now researchers from Indiana University have developed a test that detects specific biomarkers in a patient’s blood to determine if he or she is at risk for suicidal tendencies, according to a study published yesterday in the journal Molecular Psychiatry.

Every year over 40,000 Americans die from suicide—“a potentially preventable tragedy,” the study authors write. Even if people have already been diagnosed with mental illness, it’s really hard to tell if they will have suicidal tendencies before the thoughts start cascading, or if they take action. The researchers wanted to find both biological and self-reported indicators that could tip them off to patients who are at a higher risk of suicide, even if the patients themselves didn’t know it.

The researchers analyzed the biomarkers in 217 male participants that had been diagnosed with a number of mental disorders, paying special attention to those found in the 37 participants that went from low to high levels of suicidal thoughts during the course of the study. Once they identified which biomarkers were most indicative of suicidal tendencies, the researchers partnered with the local coroner’s office and looked for them in blood samples from 26 men who had committed suicide. The blood test was 92 percent accurate, the researchers found.

The researchers also developed a questionnaire in the form of an app to be used in conjunction with the biomarkers to get an even more accurate prediction of a patient’s suicide risk. “We now have developed a better panel of biomarkers that are predictive across several psychiatric diagnoses. Combined with the apps, we have a broader spectrum predictor for suicidality,” said study author Alexander Niculescu in a press release.

The study has some important limitations. The blood test was only conducted on men—the researchers have already started similar work in women and say they are showing promising initial results. The tests were also done only in people who had already been diagnosed with mental illness, and there’s no data yet on how it would work for people who have not been diagnosed. Given this, an anti-suicide blood test isn’t ready for the general public just yet, but it may get there in the next few years.