Blood Test Could Detect A Genetic Tendency Toward Suicide

Many people at risk of suicide may share a unique mutation. 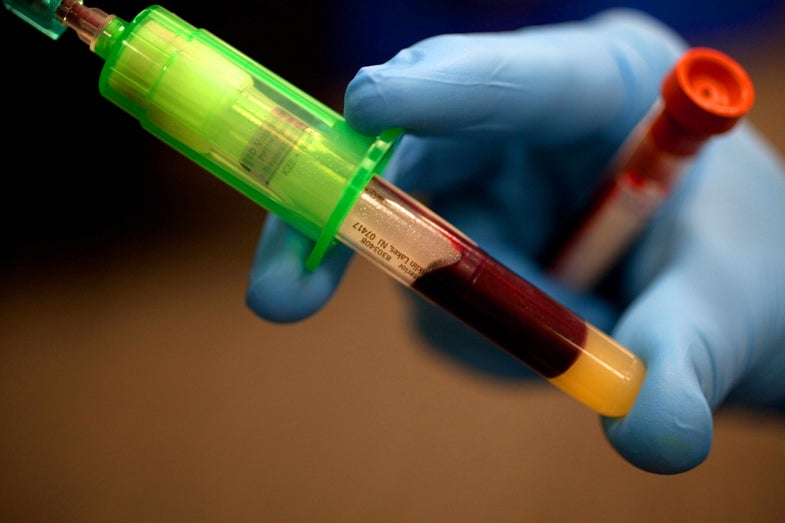 When it comes to fighting suicide, knowing who is at risk can be tricky and, moreover, a very subjective process. Scientists at Johns Hopkins Medicine are trying to bring a level of objectivity into the search for those at high risk of attempting suicide – in the form of a simple blood test.

In a new study published in the American Journal of Psychiatry, researchers say they have found something of a common denominator in people who have committed suicide or those with suicidal thoughts or attempts. The key? A unique genetic mutation in the gene SKA2, which is thought to play an important role in the way our brains handle stress. Not everyone at risk of suicide has the genetic signature, but when people do have this mutation, their likelihood of attempting suicide was found to be extremely high compared to the rest of the population.

“SKA2 has been implicated as important for the normal function of stress receptors,” said study leader Zachary Kaminsky, an assistant professor of psychiatry and behavioral sciences at the Johns Hopkins University School of Medicine. “It chaperones them, and it goes up when glucocorticoid binds to these receptors, which happens when you get stressed out.”

Kaminsky and his team became interested in SKA2 in relation to suicide after mapping the genomes of both mentally ill and healthy people; they found that in those who had died by suicide, levels of SKA2 were significantly reduced.

Upon further inspection, the researchers found that some subjects had a unique epigenetic modification of the SKA2 gene. Without changing the underlying DNA sequence, this form of mutation can change the way the SKA2 gene functions by adding chemicals called methyl groups to the gene.

“[Methyl groups] are basically molecular markers that are connected to genes that act like light switches or dimmer switches,” Kaminsky said. “They are independent of the DNA sequence, but they can turn up or down a gene.”

Additional brain and blood tests confirmed an association between higher methylation and suicidal attempts and thoughts, giving Kaminsky the idea that these methyl groups could be tested for to predict suicide risk. So the team designed a model analysis to look for methylation in the blood, accurately identifying those with this unique genetic signature. Among a group of 325 patients, the researchers were able to predict which participants were experiencing suicidal thoughts or had attempted suicide with 80 percent certainty. Those with a more severe risk of suicide were predicted with 90 percent accuracy. And in a younger group of patients, the researchers predicted with 96 percent accuracy if someone had attempted suicide in the past.

This isn’t the first time scientists have claimed a blood test could predict suicide risk, and Kaminsky noted that theirs won’t necessarily tell someone if they’re going to commit suicide. He says the test mostly shows a greater vulnerability to stress, since it denotes a down-regulation of SKA2, and previous studies have shown that individuals who have attempted suicide often have a dysregulated stress response.

Such a tool could be useful for the military, as members could be screened for their resilience to stress before embarking on active duty. Yet the blood test also brings up some controversial questions, such as who in the general public should be screened, who has access to the screening results, and what happens when someone shows up positive? While this test has the potential to help many in need, ethical concerns are sure to accompany its approval.