Can we make ourselves more empathetic? 100 years of research still has psychologists stumped.

Polygraphs and other emotional sensors are still imperfect after a century of practice. 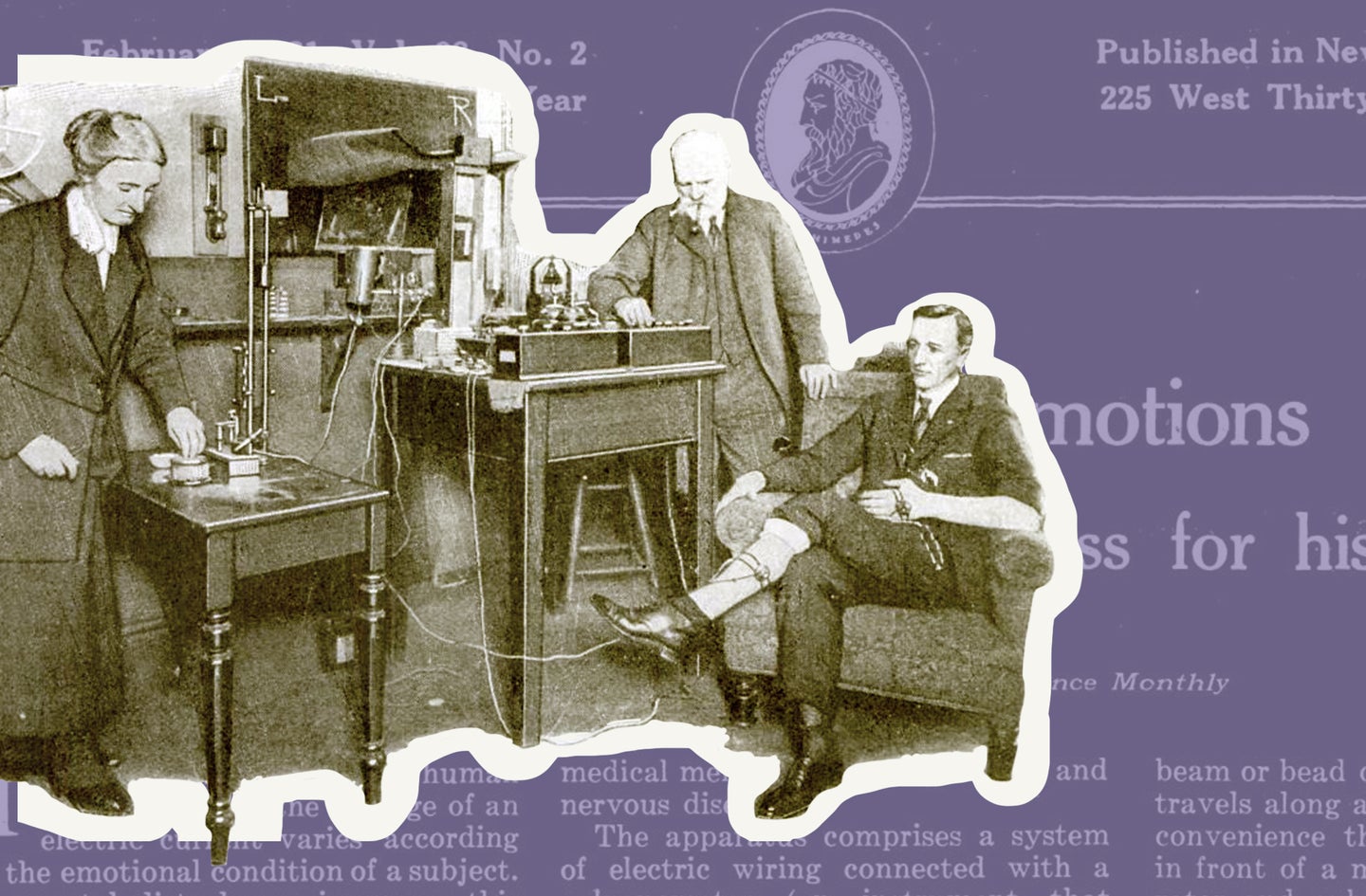 P. J. Risdon slides into an armchair in University of London’s physiological laboratory, where a small army of vacuum tubes surround the room, their hot coils humming and glowing in the shadows. “Compose yourself and smoke,” the doctor tells Risdon.

A lab assistant moves towards him holding an aluminum disk tethered to a wire. Risdon notices the assistant’s hands are badly scarred. The doctor’s doing, the assistant confirms with an affirmative nod. He dips a swatch of blotting paper in saltwater and places it on Risdon’s left hand. The wires connect to a sprawling tabletop apparatus centered around a galvanometer—a machine to detect current.

Electricity surges through the electrodes, and a bead of light jumps across a graduated scale on the meter. The scale indicates the strength of the current passing through Risdon’s hand, establishing a baseline for his conductive activity. Without warning, the doctor grabs a pin about four inches long and lunges at Risdon’s right hand but pulls back just before jabbing it. Risdon recoils. The white light spikes. “The passage of an electric current varies according to the emotional condition of a subject,” the doctor explains. The more aroused, the higher the current.

The man behind the pin is the University of London’s physiological laboratory’s director, Augustus Desiré Waller, who’d recently invented the first practical electrocardiogram (Willem Einthoven later won the 1924 Nobel prize for perfecting the ECG, also EKG). Risdon subjected himself to these experiments voluntarily while reporting an article for the February 1921 issue of Popular Science (“such is the duty to one’s editor”) to see firsthand how Waller’s latest machine accomplished the feat of quantifying human emotions. In his account, he noted that the device was not sophisticated enough to tell the difference between “anger, sorrow, and fright,” but that it could measure their presence and intensity, even if the subject tried to conceal them.

Over the course of this experiment, Risdon would also suffer being startled by a loud horn, burned with a match, and threatened with a “red-hot poker.” He was even asked to “think of something (other than red-hot pokers) which had been a cause of worry and anxiety.” Naturally, Risdon “began to wonder what the editor would think of [his] adventure, and the bead of light traveled out of sight.”

Waller’s unwieldy emotion-measuring apparatus marked the beginning of a wave of technological advances that, in 2021, transects a growing appeal for the encouragement of empathy. “I can learn about emotions by using my sensors as a lens,” says Elliott Hedman, founder of mPath, a design consulting firm that applies biosensors in classrooms, shopping centers, and other real-world settings to measure everything from student engagement to consumer reactions. “But what the sensors are better at doing is communicating people’s emotions to other people.” By quantifying emotions, his sensors encourage empathy.

We find ourselves a century after Waller’s first emotion-tracking attempts faced with a confluence of crises—novel pandemic, social unrest, economic distress, widespread disinformation, and climate devastation—whose successful resolutions clamor for us to set aside our differences, gather our resources, and work together. Accomplishing that, however, requires something that’s been increasingly hard to come by: an ability to share one another’s emotions, feel one another’s “anger, sorrow, and fright,” and act on one another’s behalf, especially in times of duress.

A few years after Risdon’s encounter with Waller, American inventor Leonarde Keeler first developed what he called an Emotograph, a machine designed to detect deception. By 1935 the Keeler Polygraph, which monitored blood pressure, pulse, and respiratory rate, secured its legacy in a criminal court case in Portage, Wisconsin, the first time the results were used to obtain a conviction. By the 1950s, it had been enhanced to incorporate skin conductance, a phenomenon in which the dermal layer becomes a better conductor of electricity whenever external or internal stimuli trigger physiological arousal. (Chalk one up for Risdon.)

The polygraph represents perhaps the most widely used application of biosensors designed to detect an emotional state, specifically deception. But its track record has been controversial. According to a 2003 study conducted by the National Academy of Sciences and the National Research Council, “overall, the evidence is scanty and scientifically weak” to support the use of polygraph tests for “security uses.” They based their conclusion on the findings that “the physiological responses measured by the polygraph are not uniquely related to deception.”

Hedman agrees—mostly. “Lie detectors do not detect lies,” he explains, “that is a misnomer, but that doesn’t mean they don’t work.” Emotions are complex, making it nearly impossible for devices like a polygraph to isolate a discrete emotion. Rather, they detect physiological arousal, or what Hedman calls “your reptilian response.”

Yet despite their compelling emotional insights, the gadgets remain imprecise. The problem is that physiological arousal alone is not a clear-cut indicator. Anger will elevate heart rate but so will fear. When monitoring someone remotely, how do researchers tell the difference? “Context matters,” Hedman says. “Video plus skin conductance tells a much deeper story.” In fact, emotion-sensing researchers rely on multiple inputs in an approach called emototyping. For his work, Hedman employs a combination of video, eye-tracking glasses, skin conductance—and people.

But if humans are still needed to establish context, then what value does an array of biosensors really add when it comes to measuring emotions? It would seem that even after a century nothing beats the uniquely human ability to determine the mental states of others based on subtle biological cues and their context. Daniel Goleman’s 1995 book, Emotional Intelligence, promoted the decades-old notion that people who readily discern between emotions have a heightened sense of empathy. That enables them to connect with the experiences of others, making them better partners, parents, coworkers, leaders, and friends.

Through his research, Hedman has demonstrated that when he shows a person’s skin conductance results to other people, they are seven times more likely to believe that the person is having a strong emotional reaction and to empathize with that person.

“If you see the data of someone else’s stress, it is so much more potent. You really believe it when you put emotions into a quantitative measurement. It actually creates a sense of empathy in people.” But does Hedman believe there’s an opportunity to deploy emotion sensors widely, at a level that our shared crises demand? “These sensors,” he admits, “are bumping into a culture that isn’t really ready to have emotions first and foremost at every piece of the conversation.”

When Risdon eased himself into Waller’s laboratory chair in 1921, he could not have foreseen how the unwieldy apparatus sitting on the table beside him would help inspire an entire emotion-sensing industry a century later. Nor could he have guessed that the most compelling case of all for emotion-sensing devices might be to heighten our collective sense of empathy at a time when it seems in short supply.