Quantum tunneling holds a clue for one of the great mysteries of space chemistry. 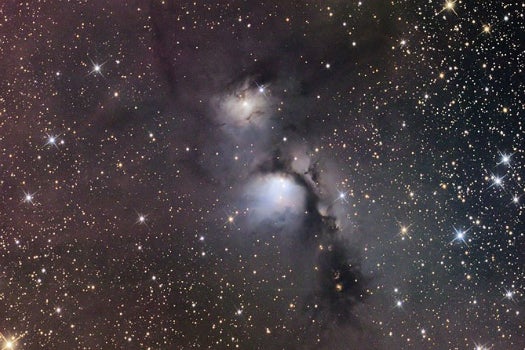 A few years back, scientists discovered a giant cloud of hooch floating around in space. The 288 billion-mile cloud of gaseous methanol, an alcohol present in antifreeze and some moonshine presented a conundrum: How do alcohols, which are fairly complex organic molecules, form in space?

In the vast expanse of interstellar space, temperatures are so low that chemical reactions shouldn’t be able to occur, following the classic rules of chemistry–there’s just not enough energy. Yet they do occur, and with an even faster reaction rate than at room temperature, according to a study online in Nature Chemistry this week. These impossible reactions can be explained through a phenomenon called quantum tunneling, the authors theorize.

As temperatures plummet, chemical reactions slow down, as there is less energy and fewer collisions between molecules to rearrange chemical bonds. But, according to the team of chemists from the University of Leeds in the UK, some reactions might skirt the classical rules of chemical reactions through quantum tunneling, a process in which a particle wiggles through the reaction barrier (the energy required to start a reaction) even when technically it doesn’t have enough energy to overcome it.

The researchers recreated the extreme cold of space to test how a highly reactive molecule called the methoxy radical, first discovered in space last year, forms.

Because gases condense on cold surfaces, the researchers created a special nozzle, inspired by the Saturn V rocket [boosters, to shoot out collimated gas that would react before touching a surface. They observed how methanol reacted with another chemical, the hydroxyl radical, at a temperature of -210 degrees Celsius (about the temperature of dust clouds near stars, the study’s author, Dwayne Heard, told New Scientist). They found that not only did the reaction produce methoxy, but the reaction took place at a rate 50 times faster than it would have at room temperature.

Heard and his colleagues plan to study how other alcoholic reactions occur in the extreme cold. “If our results continue to show a similar increase in the reaction rate at very cold temperatures, then scientists have been severely underestimating the rates of formation and destruction of complex molecules, such as alcohols, in space,” he said in a press statement.