Being asked to throw the ceremonial first pitch at a Major League Baseball (MLB) game is a true honor. That... 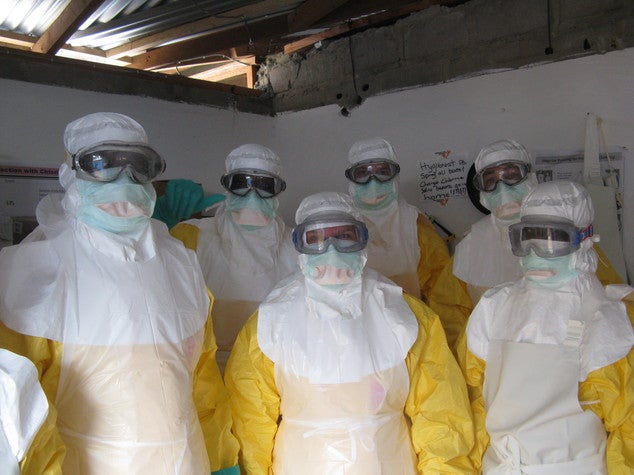 In this undated handout photo provided by Medecins Sans Frontieres, local staff and healthcare workers for Doctors Without Borders, wear Ebola protection equipment in Liberia. For doctors and nurses fighting Ebola in West Africa, working in head-to-toe protective gear in muddy health clinics is often the least of their problems, as many also struggle to convince people they are there to stop Ebola, not spread it. (AP Photo/MSF).
SHARE

Being asked to throw the ceremonial first pitch at a Major League Baseball (MLB) game is a true honor. That is, until you arrive at the pitcher’s mound. Standing in front of tens of thousands of fans, you are expected to throw the ball some 60 feet to the eagerly awaiting catcher. With little to no practice, the likelihood of a strike is a near impossibility; just getting the ball to the plate is a challenge. If you do a good job, you are met with little fanfare and the world moves on. However, as we have seen with such celebrities as 50 Cent, Carly Rae Jepsen and even former MLB star pitcher, Nolan Ryan, a miss can lead to long-lasting derision, ridicule, and criticism.

Now imagine a nurse, tasked with taking care of the first Ebola patient in the United States. She must elevate her skills to that of a virus hunter or disease detective with little more than a set of pictorial guidelines. With the entire country watching, this woman is expected with little training to give the individual the care he needs in the hopes of winning a losing battle against a deadly viral disease. All the while she must ensure she does not end up being the second case on American soil.

As seen last week in Dallas, this latter scenario played out as badly as could possibly be imagined. Not only did the patient, Thomas Eric Duncan, die from the infection but also the nurse, Nina Pham, became infected. The situation was made worse as this transmission was regarded as a transgression. This led to increased concern in the media, condemnation from the public and inadvertent blame from the CDC (for which an apology has been offered).

To place a guilty verdict squarely on the convalescing shoulders of Ms. Pham would be an injustice. It also would reflect an inability to appreciate the difficulties associated with the use of personal protective equipment (PPE). Though the widely broadcasted poster may appear to be simplistic, when the situation presents itself, following the procedures is significantly harder.

Though most media use the poster as the description of proper PPE use, this is merely a snapshot of what is needed. The most useful guidelines come from the Occupational Safety and Health Administration Technical Manual, Section 8, Chapter 1, Subsection VI. For any person asked to use high level PPE, this is the best resource to use and always should be kept nearby. Not only are the protocols more in-depth, they also reveal how much like throwing a perfect strike, the key is training and lots and lots of practice.

As with any PPE, the key to success is proper donning. The mechanics of donning the gloves, gown, eye protection, face protection and mask is specific and can be burdensome as no skin can be exposed. Any contact with bodily fluids could mean contamination (in this case, infection) and possibly injury or death. If done with a partner, the so-called buddy system, the practice can be done well. If however, it is performed alone, being absolutely sure is not a matter of confidence, but routine.

When the PPE is fully in place, there is another issue; performance of routines. These specially designed physical barriers can complicate any task as it reduces the effectiveness of many human senses, including sight and touch, let alone breathe. To carry out simple tasks such as measuring body temperature or blood pressure may not be a problem. But nurses must perform several other tricky tasks, many of which require contact with bodily fluids. Many of these can be messy under the best of times; when every single drop or gram contains millions of viruses, the implications for spread are apparent.

As the procedures are performed, many other requirements not listed in the poster need to be given consideration. First amongst them is the need to prevent any contact with exposed skin, regardless of the source. This is not an easy request as most people tend to touch their faces over a dozen times each hour. Reports suggest this may have been the route of infection in another case of a nurse who contracted the disease in Spain. Though she was wearing gloves, she may have inadvertently scratched an itch, rubbed a pained eye, or rubbed some sweat from her forehead (PPE can get very hot). The result would have been inoculation with significantly more virus than needed to cause infection.

Apart from face touching, taking a break is a fundamental necessity for any person working in PPE. Without the rest, mistakes could be made leading to accidental exposure or worse, overworking the body leading to drastic consequences such as dehydration, rapid heart rate or heat stress. The pause also allows for inspection of PPE for any breaks in the barrier or presence of contamination. The latter is especially important to note for the final stage, doffing.

When it comes to removal of PPE, doffing, the most important need is the one usually forgotten – a second individual, a buddy. In the case of any hazardous material response (HAZMAT), the removal of PPE has to be done in the presence of another person who will mark any areas of contamination and ensure no contact occurs. In some cases, prior disinfection of the PPE may be used to ensure the contaminant – in this case a virus – is inactivated. Only then can the PPE be removed.

The process of doffing is done in a manner that protects the portals of entry in order of importance. First, the skin is exposed by removing the gown and gloves with an inspection for any possible contamination. Then, head and eye protection is taken off. Finally, the mouth and respiratory tracts are freed from their mask-based protection. At this point, a good handwashing and/or shower can relieve the worker from the stress of the situation.

As with the pitch to the place, it comes as little surprise the keys to a successful experience with PPE are training and practice. However, this appears not to have been the case in Dallas. This ‘breach of protocol’ is not the fault of Ms. Pham; it is a systematic issue dealing with the need to take PPE seriously. Not surprisingly, the CDC and other public health authorities have now realized this and are now moving forward with a focus on these two requirements. With this new direction, the chances of future infections lessens and the confidence in our public health system will grow. Granted, it may take time but if done right, the next time Ebola ventures to America, the health care system will not only succeed in stopping the virus, it’ll do so with a perfect strike.