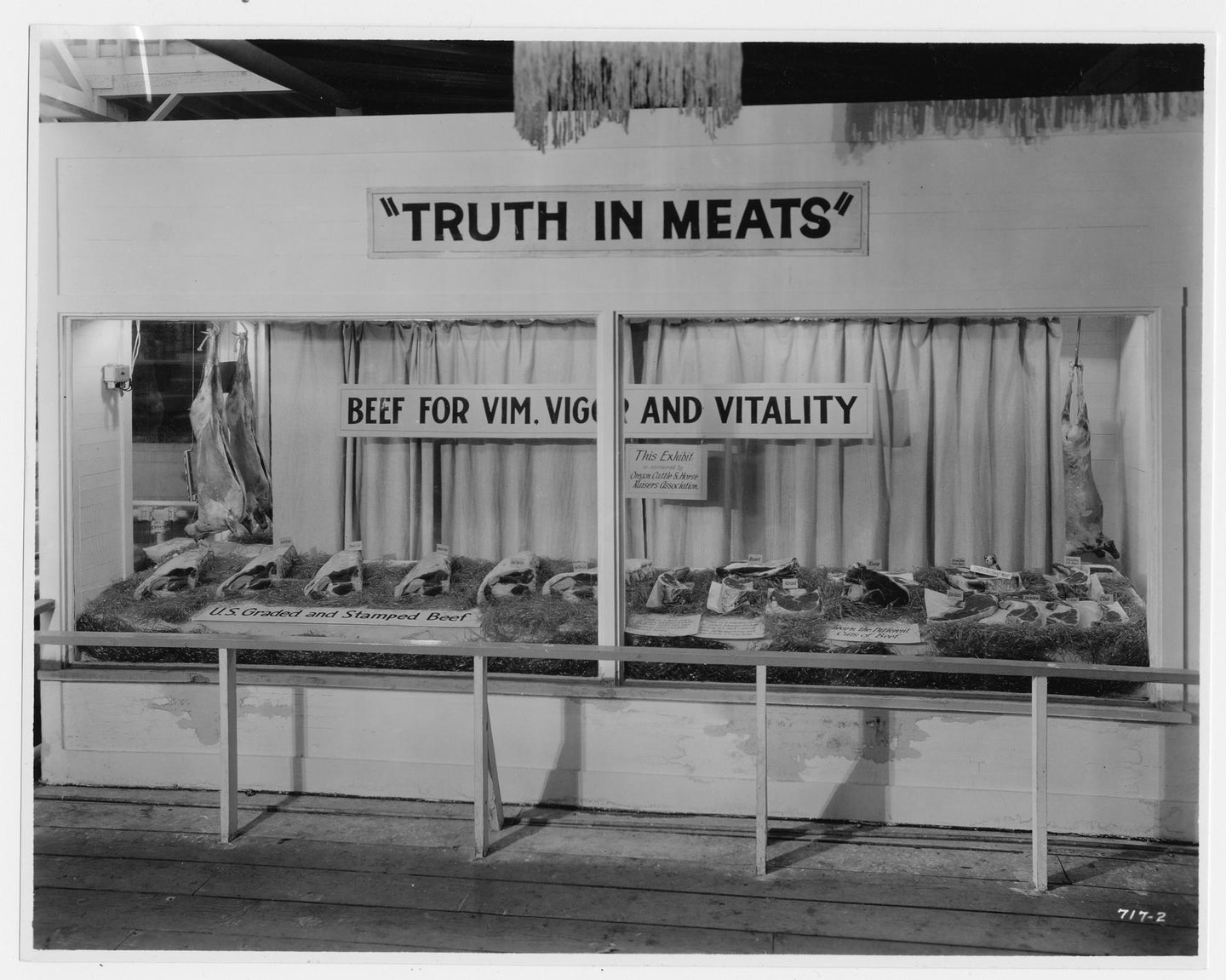 Americans celebrate their independence with sizzling sausage and give thanks with turkey. Three decades after Wendy’s debuted its signature ad campaign, “Where’s the beef?” is still a meme. And we’ve never elected a vegetarian to the White House. It’s no surprise, then, that the average American ate roughly 220 pounds of meat in 2018—a new record.

But many citizens are questioning these ingrained appetites. Scientists have shown that burger bites and chicken strips come with health risks and environmental repercussions. Red meat, for example, is linked to increased risk of cardiovascular disease and colon cancer. And livestock contributes to 14.5 percent of greenhouse gas emissions globally. Some are turning to plant-based alternatives, like the Impossible Burger, but for many Americans, breaking up with beef remains difficult.

By understanding the evolution of the United States of Meat Eaters from the colonial era to the present—and pinpointing the moment our tastes started causing trouble—we may be able to chart a more sustainable future.

In many European countries, the land and animals on it were the property of the king, says Harriet Ritvo, a history professor at MIT and the author of four books, including The Animal Estate: The English and Other Creatures in the Victorian Age. “The elite has been eating meat—all kinds of meat, elaborately—for a long period of time,” she says. “But the peasants were not eating meat at all.” (In the medieval folk story of Robin Hood, the bycocket-wearing boy turns to the life of an outlaw after killing one of the king’s deer.)

When colonists began arriving in the new world, their fortunes quickly changed. They found an abundance of land (stolen, of course, from indigenous people), most of it loosely controlled. Native animals provided some ready protein, but the plentiful natural fauna was also ideal for fattening imported livestock. Pigs, for example, could root around in the forests for free, before being topped off with corn and slaughtered.

“By the time of the American Revolution, all the data suggests Americans were eating between 150 and 200 pounds [of meat] a year,” says Roger Horowitz, director of the Hagley Museum and Library’s Center for the History of Business, Technology, and Society, and author of Putting Meat on the American Table. That included everything from pork to muskrats.

Colonists found similar conditions in the endless expanses of Australia and Argentina, Horowitz adds. Along with New Zealand and the United States, they’re the only countries on Earth where citizens eat more than 220 pounds of meat each year.

Our reputation as a flesh-eating paradise persisted as successive waves of European immigrants arrived on its shores. As the famine-fleeing Irish began arriving in New York and Boston in the 1850s, for example, they couldn’t afford premium porterhouse steaks, but they found abundant cheap meat for stews, Horowitz says. “And they quickly associated eating meat with being American.”

But by this time, many Americans were getting their meat from a neighborhood butcher. Instead of hunting or farming themselves, urban dwellers sourced their chicken and beef from outlying farms. New Jersey farms, for example, provided meat for people living in New York City.

Unlike contemporary grocery stores, where only choice cuts are sold, butchers of this era would have hawked as many parts of the animal as possible. Offal, or organ meat, was still on the menu (often at a reduced price); recipe books even advised home cooks on preparing brain.

Meats were also prepared in different ways. Before people had refrigerators, they stored food in a cold basement or, if they were wealthy, kept an ice box stocked with imported ice. (That’s what you see in the opening scene of Frozen: Scandinavians cutting frozen water out of local lakes so it could be sold around the world.) Preservation challenges meant many people opted for cured meats, like barrel salted pork.

Things continued to change as the industrialization of the food industry picked up steam. Meat was shipped in from distant production hubs like Chicago and Cincinnati, rather than being slaughtered by local butchers. To maintain profits, people farmed animals more intensively than ever, keeping as many cows or pigs or chickens on a plot as possible. This created immense waste—and public outcry.

In 1906, Upton Sinclair published his novel The Jungle, based on his own reporting in Chicago’s meatpacking plants, where animals were gathered, slaughtered, processed, and packaged for consumption. “I aimed at the public’s heart,” Sinclair said, “and by accident I hit it in the stomach.”

City-dwellers who objected to the smell, poor working conditions, and detritus pouring into the local waterways slowly pushed the industry out of urban centers. In 1900, New York’s Meatpacking District housed 250 slaughterhouses and packing plants. Now, it’s one of the city’s trendiest neighborhoods and is known for the Highline park. But people didn’t stop eating meat, they just sourced it from farther afield.

It was around this time that problems with meat production became more readily apparent. “Certainly it was more sustainable before 1800, in the sense that it was so decentralized, and you were relying on local resources for that purpose,” Horowitz says. Animals would feed on local plants, and then local people would eat those animals.

Now meat can be cheaply mass-produced on intensive farms and shipped to consumers from other states, even other countries. New scientific innovations have also caused problems: today’s livestock are often pumped with growth hormones and antibiotics.

Americans have been eating large amounts of meat since the day they docked in the new world. Yet the exact breakdown of our diets has changed. “In the U.S., total meat consumption is still going up very slightly,” says Mark Rosegrant, a senior research fellow emeritus at the International Food Policy Research Institute. “But there’s a change in the U.S. in the composition of meat.”

That’s right: since 2015 Americans have eaten more poultry than red meat each year.

The flightless bird started to soar in the 1980s, when doctors advised the American public against eating too much saturated fat, a key component of beef. But the real motivator is price. As farmers found ways to grow fatter chickens faster and in smaller confines, the price for a pound of chicken dropped to just one-third that of a pound of beef, according to The Economist.

Our diets may change again. Instead of catering to people who are already vegetarian, companies like Impossible Burger are trying for the first time to convert avowed meat lovers to plant-based alternatives that taste like the real thing. Whether they succeed remains to be seen, but it could be an important step in reconciling the integrity of the natural and our insatiable desire for animal protein.