Zapping Invasive Plants from a Helicopter

Last month, I wrote about an overlooked passage in Rachel Carson’s famous book, Silent Spring. To recap, the excerpt goes... 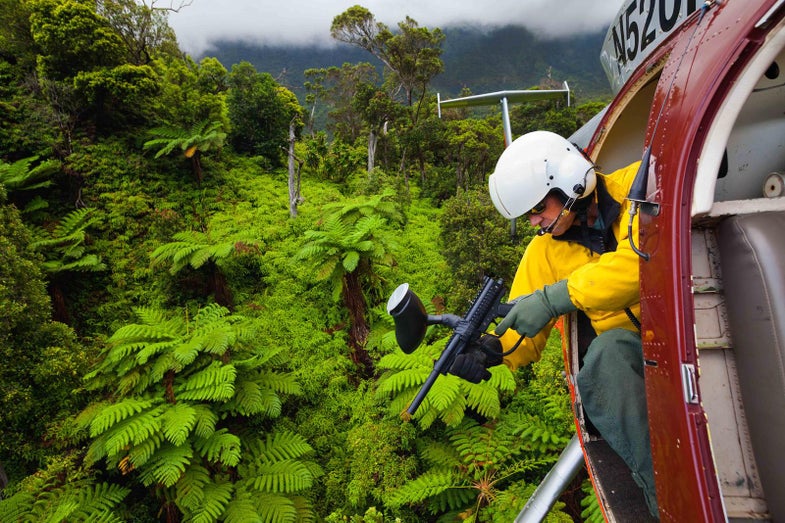 (ALL INTERNAL RIGHTS, LIMITED EXTERNAL RIGHTS) September 2012. Trae Menard leans out of a helicopter with a paintball gun over a patch of healthy Australian tree ferns (Cyathea cooperi) in Lumahai Valley, Kauai, Hawaii. The gun was a real paintball gun, but incomplete (missing the pressure cartridge), loaded with paintballs (not herbicide), and not a model used by Dr. James Leary for Herbicide Ballistic Technology. PHOTO CREDIT: © Ethan Welty. © Ethan Welty
SHARE

Last month, I wrote about an overlooked passage in Rachel Carson’s famous book, Silent Spring. To recap, the excerpt goes like this:

“It is not my contention that chemical insecticides must never be used. I do contend that we have put poisonous and biologically potent chemicals indiscriminately into the hands of persons largely or wholly ignorant of their potentials for harm.”

My point was that Silent Spring wasn’t a call for the end of pesticides, as some Carson-haters claim, but a plea for more judicious use of the chemicals. In Carson’s time—indeed, immediately following WWII and the advent the first synthetic pesticides—we went a little crazy with the stuff. Carson advocated for more attention to be paid to the overall ecology of the landscape, so that pesticide application could be limited and targeted to avoid killing the wrong things.

Silent Spring is mostly about insect control, but I recently came across an example of thoughtful pesticide use in plant control that I think she would have appreciated. 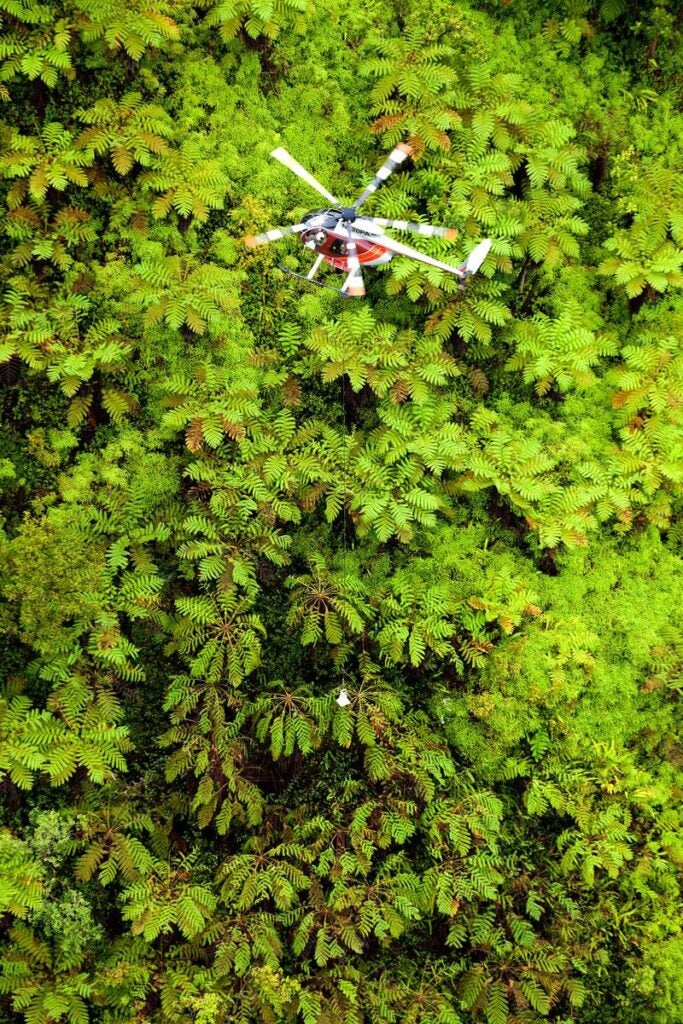 Pilot Jim Hobbs demonstrates the use of “The Stinger” on a patch of invasive Australian tree ferns (Cyathea cooperi) in Hanalei Valley, Kauai, Hawaii. Hobbs uses the Stinger, a long-line mounted spot sprayer, to apply low-toxicity herbicide to the ferns a

In 2003, Trae Menard, the Director of Forest Conservation at The Nature Conservancy in Hawaii, was worried about invasive plants choking native forest in the remote mountains of Kauai. The region provides the island’s drinking water: rainwater fills aquifers in the mountains, and the plants growing there impact how the water is absorbed. If the wrong plants wrest the land from vulnerable native ones, it could jeopardize the water supply. Kauai is also home to roughly half of the biodiversity in Hawaii. Invasive plants—as well as invasive animals such as feral pigs—threaten it.

The terrain was too dangerous to search by foot, so Menard and his team spent three years mapping the mountain forests by helicopter, marking potential invasive plants and animals with GPS. One plant the scientists saw was especially disconcerting: the fast-growing Australian tree fern, which can tower thirty feet and spawn tens of millions of spores. “The thing that was really scary about Australian tree fern was the distribution,” Menard told me week before last by phone. “Most weeds, you see a core invasion, and then you’ll see the leading edge, and then no weeds. And usually we focus on those leading edges of the weeds. But with Australian tree fern, man, it was everywhere. We were finding it in the deepest, most remote parts of the forest.”

Menard needed an easier, more accurate way to map the forest in order to better pinpoint the giant invasive ferns. In 2006, he teamed up with the Stephen Ambagis, then at the US Geological Survey. Later, they worked with a company called Resource Mapping, which provided a method of combining both wide angle and telephoto digital images into georeferenced maps with the help of an Israeli company called Icaros, Inc, which had propriety software originally developed to identify IEDs (in 2008, Ambagis and Dana Slaymaker, the principle researcher at Resource Mapping, launched Resource Mapping Hawaii).

At the same time, Menard was trying to figure out how he would kill the Australian tree ferns once he found them. There was no way to attack the plants from the ground—again, it was too treacherous to go by foot. Even if it weren’t, the ferns were too massive to remove manually, and there were just too many of them. He would have to use an herbicide, and he’d have to apply it from the sky.

Menard had to select his herbicide carefully. In addition to the invasive plants, the Kauai forests are filled with hundreds of native plant species, some of which are endangered, which meant the wrong herbicide could cause irreparable 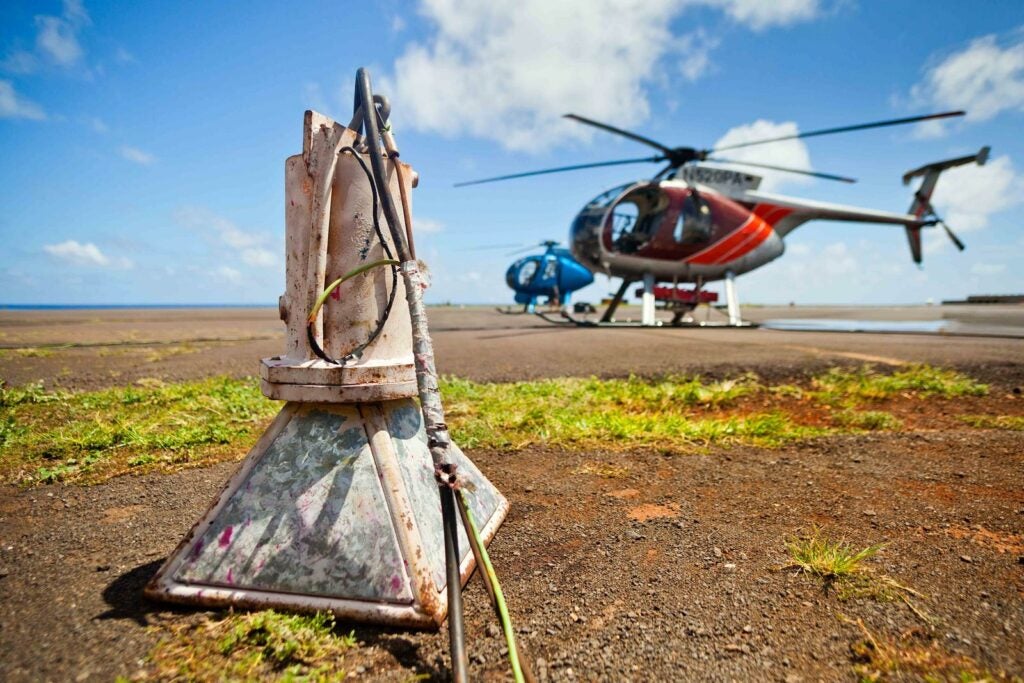 The nozzle of the “The Stinger” at Lihue Airport in Lihue, Kauai, Hawaii. Helicopter pilot Jim Hobbs uses the Stinger, a long-line mounted spot sprayer, to apply low-toxicity herbicide to the tops of individual invasive Australian tree ferns, as a contrac

damage. Hawaii also has a strong anti-pesticide movement, which caught wind of the project, prompting a community meeting where the scientists had to show how they planned to keep the herbicide from damaging the watershed.

Most of the herbicides Menard tested that were legal to use in forests and watersheds killed the Australian tree ferns in the lab, but required a big dose. Spraying voluminous shots of liquid herbicide from a helicopter could inadvertently splatter it on the wrong plants. It would also mean the helicopter would have to take extra trips to refill the herbicide tanks, which would make the rides prohibitively expensive.

By a stroke of luck, Menard heard from James Leary, a friend and an invasive plant specialist at the University of Hawaii, who suggested the herbicide imazapyr for the project. In tests, it only required an average of 10 milliliters, or around two teaspoons, aimed into the center of the fern where the fronds sprout from the trunk. Between this and the fern’s massive size—which made it relatively easy to spot from the air—Menard had found its Achilles heel. He and his team rigged up a helicopter delivery system and traipsed the Kauai forests zapping the invasive plant like something out of an eighties arcade game. (In earlier tests, they hit the ferns with herbicide-filled paintball guns; today, they use a spraying device called a “stinger” that is lowered from the belly of the helicopter).

Over the past four years, Menard’s group has treated around 10,000 Australian tree ferns over a spread of 15,000 acres. And here’s the best part: they’ve used only 23 gallons of herbicide. That’s a little over a teaspoon per acre. It’s hard to find a good comparison that expresses how little herbicide this is. When I asked Menard for one, he said these types of control projects are “an apples and oranges thing.” He added: “Whenever I’ve told our partners and other folks doing conservation and forestry weed control how much herbicide we used, they are generally shocked it’s so low.”

It’s too early to tell if Menard and his crew are working fast enough to kill the Australian tree ferns before the millions of spores can spread the invasive plant further, but they’re currently remapping the forest to see if the ferns are receding. The work could be published within the year.