With the Holiday Season in full swing, many families will turn not to the tried and true tradition of inviting... 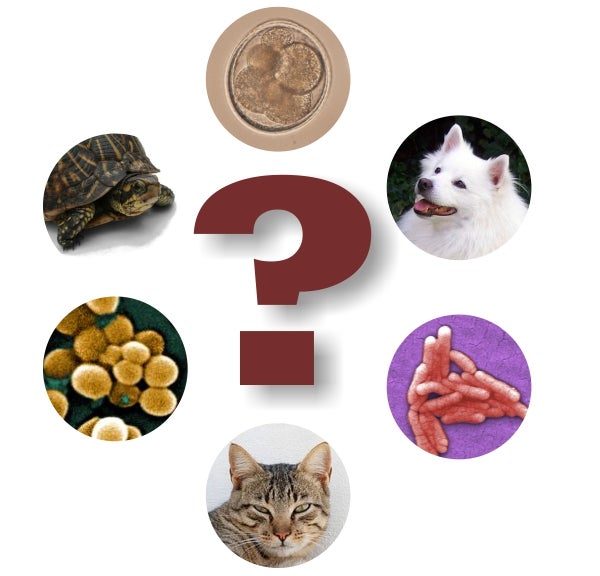 With the Holiday Season in full swing, many families will turn not to the tried and true tradition of inviting a new addition to the family. Pets are considered to be a popular choice amongst many developed countries and the benefits to owners have been well documented. There is even hope that pet ownership can be a factor in improving psychosocial behaviours in children with autism. From a purely psychological perspective, the idea of a pet appears to be a win-win situation for everyone.

From a microbiological perspective, however, the introduction of a pet into the home may have unwanted consequences. Much like humans, animals have a unique microbiome the composition of which may not be entirely healthy for humans and lead to pet-related infections. A number of specific pathogens, including _Toxoplasma, Cryptosporidium _and Toxocara are commonly found in both dogs and cats. An even greater variety of infections can be acquired from non-traditional pets. Then there are the infections associated with those annoying pet insects such as fleas. More recent evidence has suggested that our pets might be harboring antibiotic resistant bacteria, such as MRSA and Clostridium difficile.

The dilemma of pets and infections has caused such a stir that public health officials are actually vetting public awareness of the risks and have made calls for better education. Some have even gone so far as to suggest that pets be avoided for certain populations, such as those with comprised immune systems. Others still believe that the entire microbiomes of all companion animals need to be elucidated in order to truly understand the risks.

But are pets really the harbingers of our demise? Or much like our own experiences with microbiome-related illnesses, are we simply facing a different challenge that requires a little more thought and prudence.

I reached out to Dr. Christina Karkanis, a veterinarian and the owner of Bay City Animal Hospital in the Northern Ontario city of North Bay. Karkanis has experience in all forms of domestic animals as well as livestock and over her 20 years of experience, has seen her fair share of infections.

“I completely understand why public health officials are concerned. As a vet, I’ve had a few nasty wounds from bites and scratches although my strangest encounter was a Cryptosporidium carrying snake that kept me under the weather for a week. You have to expect the unexpected.”

Karkanis’ experiences also offer perspective on her opinion of the risks of infection from pets. In her estimation, the more exotic the species, the more one needs to be educated. “When it comes to exotics, especially those reptiles, chelonians and lizards, new owners require more education both for the pet’s wellbeing as well as their own. For example, there have been numerous reports of_ Salmonella_ associated with turtles. The bacterium is natural to these animals but can cause serious disease in humans.”

But for the usual companions – dogs and cats – Karkanis believes that people should be more concerned with the source rather than the risk. “New pet owners should be advised to be selective about the source of their new pets. Puppy and kitten mills, like any high intensity animal operation, carry more risks. When adopting from these operations as well as rescues it may be advisable to visit your veterinarian with your new pet prior to taking them to your home so that they can be checked and/or treated for ectoparasites and endoparasites if not done already.”

But even if the pet is adopted from an organization in which all the checks and balances have been performed, there is still a need for increased hygiene. While many believe this will help to prevent human infections, as Karkanis points out, it offers a two-way benefit.

“New pets will bring in new germs, that is a given. But you also have to realize that the animal will also become exposed to your germs. You could be carrying bacteria, viruses or parasites that could either colonize or harm an animal, turning them into unsuspecting vectors or victims of disease. In one case, I saw a dog acquire Giardia not because of its excursions in the environment, but because its owner who had the parasite forgot to close the lid of the toilet.”

This experience has also been shown to be the root for pets that carry antibiotic-resistant strains of bacteria, such as MRSA as well as Escherichia coli. This phenomenon, known as within-household sharing suggests that microbiologically speaking, pets are essentially a true part of the family.

As to the paradox, Karkanis is skeptical. “I really don’t see a paradox but rather the same problem seen in other areas where infections happen, including healthcare facilities, public gathering places and concentrated animal feeding operations (CAFO) farms. People need to be aware of their environment and also of the risks associated with them.”

But she is also quick to point out that much like young children; pets are unable to do much to ensure they are safe. This means that a greater burden is placed on the owners to keep everyone healthy through hygiene and regular checkups. Yet, these needs should not lead people to avoid bringing a pet into the home. From her perspective, these requirements make the relationship even stronger.

“A pet provides so much more than a microbiome and I believe we need to focus on that. While there are no guarantees that there won’t be an infection, I am proud to say that I haven’t personally experienced infection transmission in either direction when the owners practise elementary hygiene and keep regular medical visits. But as I know as a mother, a veterinarian and a pet owner, these actions, while medically sound, are really about care. Whether it’s a child, a patient or a pet, as I’ve learned over two decades, a little caring can go a long way towards everyone’s health and happiness.”