Megapixels: Space Shuttle Enterprise Gets Grabbed By a Crane

Space Shuttle Enterprise was the property of the Smithsonian Institution for 27 years. The shuttle never went to space; instead,... 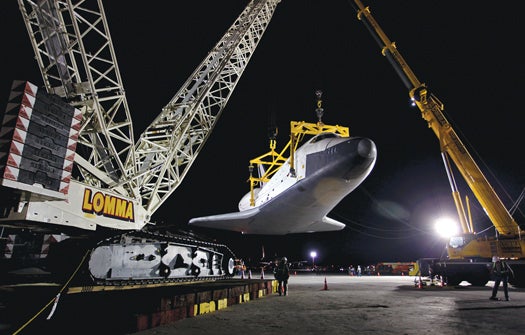 The space shuttle Enterprise hangs in the air at John F. Kennedy International Airport in New York, Sunday, May 13, 2012, after it was lifted from a NASA 747 Shuttle Carrier Aircraft in preparation for its upcoming journey to its new home at the Intrepid Sea, Air & Space Museum. Enterprise has been separated from the NASA 747 Shuttle Carrier at John F. Kennedy International Airport, just weeks after flying over New York City. Next month it will be taken by barge to the aircraft carrier USS Intrepid, the floating air-and-space museum that will be the shuttle’s permanent home. The shuttle is scheduled to open to the public in mid-July. (AP Photo/Craig Ruttle) PSC0812_Megapixels. Craig Ruttle
SHARE

Space Shuttle Enterprise was the property of the Smithsonian Institution for 27 years. The shuttle never went to space; instead, NASA used it for landing and launch-pad vibration tests. The end of the space shuttle program last year gave the Smithsonian the opportunity to get Discovery, a shuttle that actually earned its “space” moniker. Thus Enterprise came to its new home, New York City, in April, where 50 employees from NASA and aerospace company United Space Alliance spent eight hours separating the 165,000-pound shuttle from its modified Boeing 747 transport.

Workers undid three bolts, up to two inches in diameter, connecting the two craft and then attached a yellow sling to the shuttle. Two cranes helped finish the task. One lifted Enterprise while the 747 backed out; the other crane held the shuttle steady as it was lowered onto a trailer. In June a barge carried Enterprise up the Hudson River to its final destination, the Intrepid Sea, Air & Space Museum.