Robot Boy To Be ‘Born’ In 9 Months, And Programmed To Do All His Chores 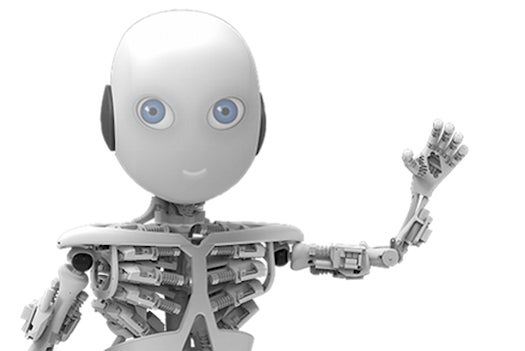 Where are our mass-produced robot butlers already, the Rosies of our Jetsons families? Still a ways off, unfortunately, but here’s the next best thing: ‘Roboy,’ a child-like service bot that researchers are billing as “one of the most advanced humanoid robots.”

Roboy, which the inventors are trying to create in nine months, is tendon-based, and it’s modeled on people. Young ones, in this case. The idea is for it to help out with duties usually reserved for humans, depending on what the user needs. The robot, or at least similar robots, could help care for the elderly a la Robot & Frank, the researchers say.

Roboy will also get so-called “soft skin,” a layer of something to make it “safer and more pleasant.” All of that sounds very human-like and, presumably, the team is trying to avoid the uncanny valley, that point where robots are just human enough to give us the creeps without passing for actual humans. The glimpses of Roboy we see right now are pretty charmingly cartoonish, so we’ll have to wait and see just how the real-boy-versus-‘bot balance plays out in the final version.

The team, from the University of Zurich, is already five months into the nine-month project and planning on unveiling Roboy in March. In the meantime, you can check out the researchers’ page for more info, and watch the promotional video above. It even has a sort of mad-scientist-ish Goethe quote!