A Robot Army To Build Solar Panels (On The Moon) 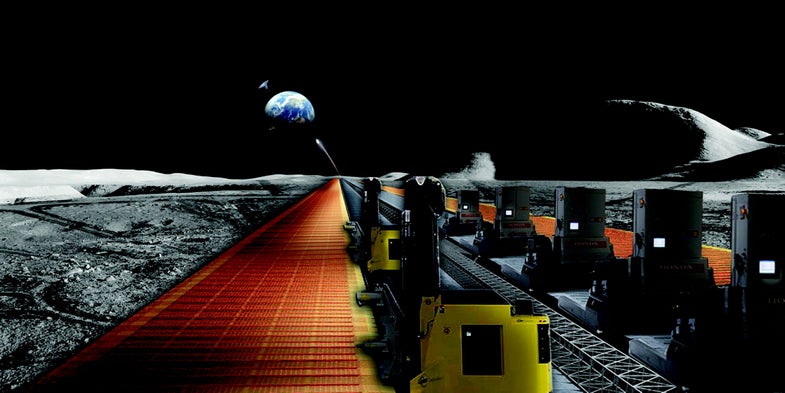 A research paper in New Space outlined a potential solution to earth's energy crisis: solar panels on the moon. The paper, written by a high school senior, proposed creating solar panels that would replicate themselves autonomously and supply all of earth's electricity with energy collected from the sun. Justin Lewis-Webber/New Space
SHARE

As the global headcount nears 8 billion, our thirst for kilowatts is growing by the minute. How will we keep the lights on without overheating the planet in fossil fuel exhaust? Alternative energy is the obvious choice, but scaling up is hard. It would take an area the size of Nevada covered in solar panels to get enough energy to power the planet, says Justin Lewis-Weber, “and to me, that’s just not feasible.” This past March, Lewis-Weber, a then-high school senior in California, came up with a radical plan: self-replicating solar panels—on the moon.

Here’s the gist: When solar panels are orbiting Earth, they enjoy 24 hours of unfiltered sunshine every day, upping their productivity. Once out there, they could convert that solar radiation into electricity (just as existing solar panels do) and then into microwave beams (using the same principle as your kitchen appliance). Those microwaves then get beamed back to Earth, where receivers convert them back into electricity to power the grid. Simple! Except that Lewis-Weber estimates that building and launching thousands of pounds of solar panels and other equipment into space will be outrageously expensive, in the range of hundreds of trillions of dollars.

Instead, he suggested, why not make them on the moon? Land a single robot on the lunar surface, and then program it to mine raw materials, construct solar panels, and (here’s the fun part) make a copy of itself. The process would repeat until an army of self-replicating lunar robot slaves has churned out thousands of solar panels for its power- hungry masters.

You’d still have to get those panels to orbit Earth so a steady beam could reach the surface; that’s where the moon’s weak gravity and nonexistent atmosphere come in handy, requiring far less energy (and money) for the panels to escape. It might be a moonshot, but the technology to pull it off isn’t far away. How does that stack up to your high school science project?