This A.I. Program Can Identify Billions Of Stars 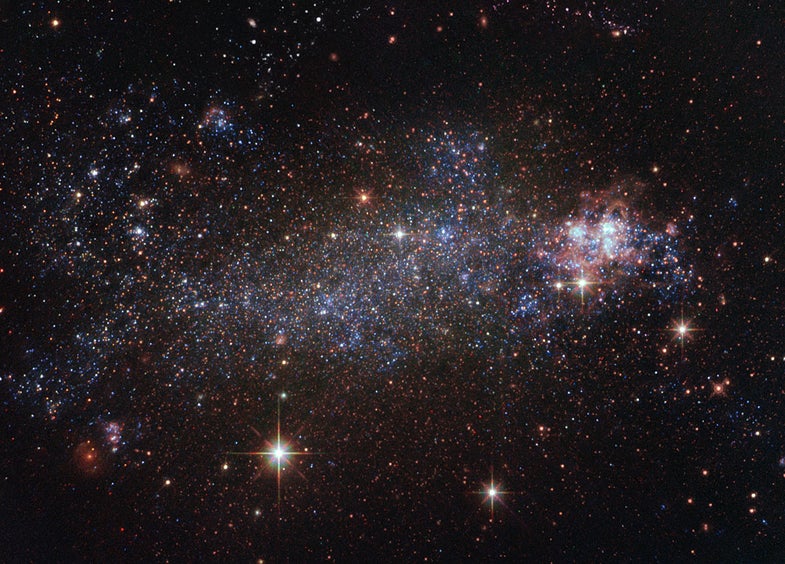 Unlike most galaxies, which resemble ellipticals or spirals, this galaxy does not conform to a clear shape. About a quarter of star systems take a similarly indefinite form and are known as irregular galaxies, according to NASA. ESA/Hubble & NASA
SHARE

When scientists discover a new star or galaxy, they typically rely on information gleaned from academic papers, catalogs and other existing information to classify their discovery. This may be typical, but it’s not as efficient as it could be. That’s why researchers from the University of Illinois have created a star-galaxy classification framework that utilizes neural networks for all the heavy lifting.

ConvNets is what’s known as a “deep convolutional neural network,” a type of computer program designed to “learn” along the same lines as a biological brain, and used frequently in image identification. According to creators Edward J. Kim and Robert J. Brunner, it fetches data direct from the Sloan Digital Sky Survey and Canada-France-Hawaii-Telescope Lensing Survey to compile accurate classifications that are competitive with more conventional machine learning techniques.

This isn’t the first time neural networks have been utilized when dealing with astronomy, with artificial neural networks first applied with star-galaxy classification back in 1992, though the latest from Kim and Brunner is more advanced, giving researchers the ability to classify billions of stars and galaxies via photometric data that otherwise wouldn’t be humanly possible.

Machine learning is seeping into several aspects of scientific research ranging from improving self-driving tech, facial recognition and more. It’ll be interesting to see how this sort of research and breakthroughs affect classification and even possibly space exploration in the future.