Millions of years ago, hollow trees literally tore themselves apart to grow 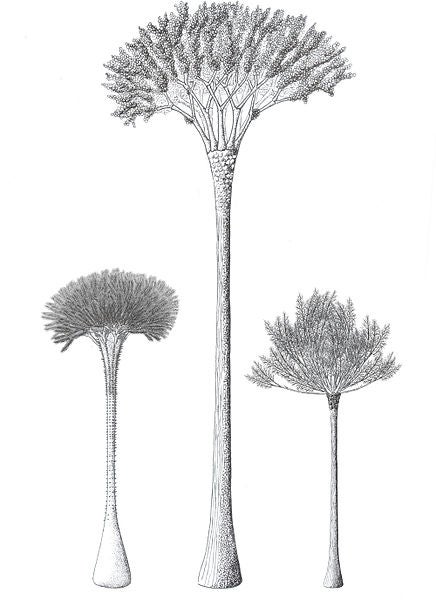 374 million years ago, fish and trilobites dominated the seas, swimming past coral reefs and ammonites. Things were happening underwater, while on land everything stayed pretty dry and boring.

A few arthropods started to step out on solid ground, but for the most part, plants dominated the shores. But even plants had only recently begun to grow, and the forests that towered over the early Earth were vastly different than they are today.

Some of the earliest forest-forming trees were members of a group called Cladoxylopsida, which were towering, woody, and had an empty space where their heart(wood) should be.

“The woody tissue is in a series of strands which form a ring around the outside of the trunk. The inside is more or less hollow,” says Chris Berry, a palaeobotanist at the University of Cardiff. “If you could look into the inside of the tree with x-ray vision you’d see something like a round version of the Eiffel tower.”

Today, trees typically grow in solid rings, adding layers of wood as they grow older, but things were a lot tougher for Cladoxylopsids.

“Really it shouldn’t be able to grow—you can’t push the Eiffel Tower apart and expect it to get bigger in diameter,” Berry says.

But grow they did, up to heights of 39 feet, looking somewhat like a palm tree with a bushy crown atop a smoother trunk. Now, Berry has a better idea of how they managed to grow, if not why.

In a paper published this week in the Proceedings of the National Academy of Sciences, Berry, his co-author Hong-He Xu and colleagues describe specimens of trees that were amazingly preserved in volcanic ash, with silica replacing cells, giving researchers an unprecedentedly detailed view of what the tree was like at the moment that they died.

“Each of the strands grows it’s own set of growth rings around it, like a mini-tree within the tree,” Berry says. Between the woody strands—the vascular system of the plant—other, softer tissues expanded as the tree grew, helping to push the strands apart. To accommodate the stress, the strands sometimes split apart, effectively tearing and repairing the plant’s structure to accommodate its growing bulk.

“Not only did it tear itself apart, it repaired itself as it went along, and we can see every detail of this in these fossils,” Berry says. “We’ve found a new developmental trajectory for being a tree.”

Berry and Xu plan to continue their work, focusing on the roots in addition to the trunks and looking at other species of trees fossilized nearby. They also plan to look into the smaller growth rings in the strands to see if they are annual (like the rings in trees today) or if they operate on a different time scale. While modern trees can record climate in their growth rings, Berry and colleagues aren’t yet sure if these ancient trees could do the same.

To test the idea they’ll look at a well-preserved tree and see if the number of rings decreases towards the top, which they would expect to happen with this particular growth pattern. They also want to try to figure out why some of the earliest trees in the world also happen to be the most complicated. They don’t have a working theory yet, but Berry knows where to look; at the environmental pressures that existed at the time (or the lack thereof).

“Earlier organisms weren’t faced with the same ecological pressures that modern plants and animals were constrained by, so they can do some unusual things,” Berry says. “It’s like what happened in the Cambrian explosion, there were lots of strange body forms in animals appearing at that time, things that we’d consider quite outlandish today. It’s probably the same with plants. What we’ve essentially discovered a new body form of tree.”