What’s cooler than a hover-capable, electric-powered, super-quiet personal VTOL (vertical takeoff and landing) aircraft? If you answered “absolutely nothing,” do... 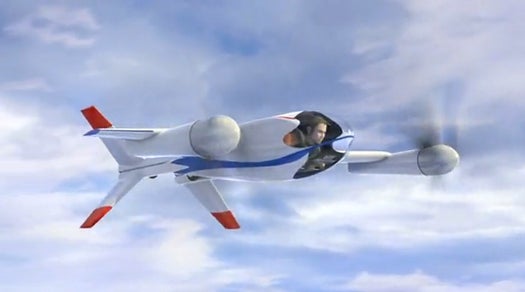 What’s cooler than a hover-capable, electric-powered, super-quiet personal VTOL (vertical takeoff and landing) aircraft? If you answered “absolutely nothing,” do read on, because NASA is preparing to oblige you. The space agency’s Puffin aircraft design will be officially unveiled tomorrow, showing just how far personal, electrically propelled flight could change the ways we live and get around.

The Puffin is something of a personal V-22 Osprey, complete with vertical-takeoff and landing capability (but minus the squad of Marines). But rather than tilting the rotors forward for horizontal flight, the whole craft — cockpit and all — pitches forward, meaning the pilot flies from a prone position. During takeoff and landing the tail splits into four legs that serve as landing gear, and flaps on the wings deploy to keep the aircraft stable as it lifts and descends.

Don’t let the cuddly name fool you; as far as specs are concerned the Puffin is no slouch. Its 12-feet height and 13.5-feet wingspan mean it’s big, but of manageable stature. In theory it can cruise at 150 miles per hour and sprint at more like 300 miles per hour. Since the craft is electrically propelled it doesn’t need air intake, so thinning air is not a limitation, meaning it can reach — again, in theory — 30,000 feet before limitations on battery power force it to descend (clearly the pilot would need a pressurized cabin or oxygen tanks at that altitude, but we’re just talking raw physical capability here).

The Puffin’s range would be the most limiting characteristic, at just 50 miles, but that’s simply a matter of battery density. Batteries are growing more dense by the day, so in coming years that range could be drastically improved.

Of course, the Puffin is so far just a cool digital rendering in a NASA-branded video, but let’s not forget exactly who put men on the moon before we call the concept unfeasible. The coolest thing about the Puffin design is that it shows just how electric flight could revolutionize personal transportation. Aside from the military applications (super-stealthy troop insertions with very low thermal signatures?) the quiet, uncomplicated, low-powered electric lift — just 60 horsepower gets pilot and craft airborne — shows how a world in which everyday folks get around modern cities via personal aircraft may not be as sci-fi as was once thought.