The arms race between bacteria and viruses just got a microscopic bit hotter. 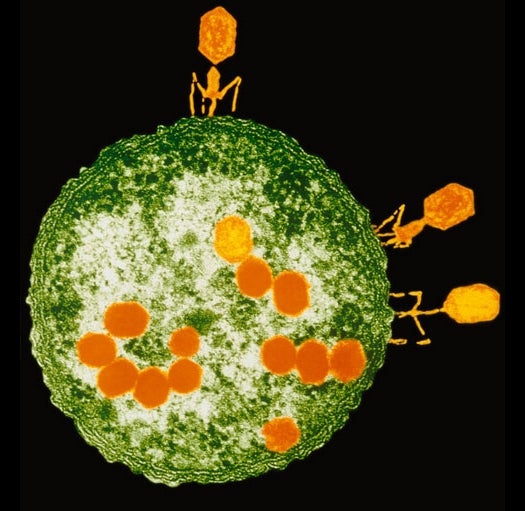 Sometimes, I read a news item that pretty much overturns an entire class of pedagogy in my head.

Take, for example, the discovery that virus particles steal and repurpose a bacteria’s immune system, and use it against them. My first thought was “holy crap, bacteria have an adaptive immune system?!” Then I remembered reading something about that from a couple of years ago (which I clearly promptly forgot, because I don’t actually follow that particular field very closely). My second thought was “of course viruses would exploit that — those bastards exploit every loophole that mutagenesis and genetic theft have to offer.”

The phenomenon, which was published in Nature this week, was discovered by Kimberly Seed and colleagues when they looked at bacteriophages who usually infect and kill the bacterium responsible for cholera Vibrio cholerae. When looking at samples, they noticed that the phages’ genomes had elements of a particular set of genes that usually only certain kinds of bacteria have, called CRISPR-Cas, and that were recently found to be the basis of an adaptive immunity effective against phage infection. To test if the immune system helped the phage infect more V. cholerae, they first tried to infect the bacteria using phages that did not have the stolen CRISPR-Cas genes. Those phages were unsuccessful. But when the researchers added the immune-system-enhanced phages to a sample of cholera bacteria, the phages were successful in infecting and killing the bacteria. The phage does so by targeting bacterial genes that would normally inhibit the phage from infecting the cell. Without that defense, the bacteria quickly fills with copies of the virus particles and explodes. 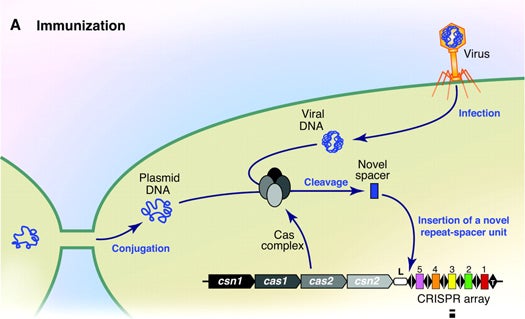 It’s important to remember that the bacterial adaptive immune system is not nearly as complex as ours. The mammalian system uses small molecules (the complement system), enormous proteins (immunoglobulins) and shambling-horror phagocytes (white blood cells) in a bid to keep us crud-free. The CRISPR-Cas system is basically a series of repeat sections of DNA, separated by spacer stretches of DNA [the CRISPR part], and closely associated with genes for a certain class of proteins [the cas part]. Cas proteins look and behave an awful lot like nucleases, helicases, etc — basically, proteins that could interact with a nucleic acid. Since injection of nucleic acids is how viruses hijack cells, having an endogenous source of proteins designed to specifically recognize and then chew up those molecules is going to be useful in defending against the viral invaders. 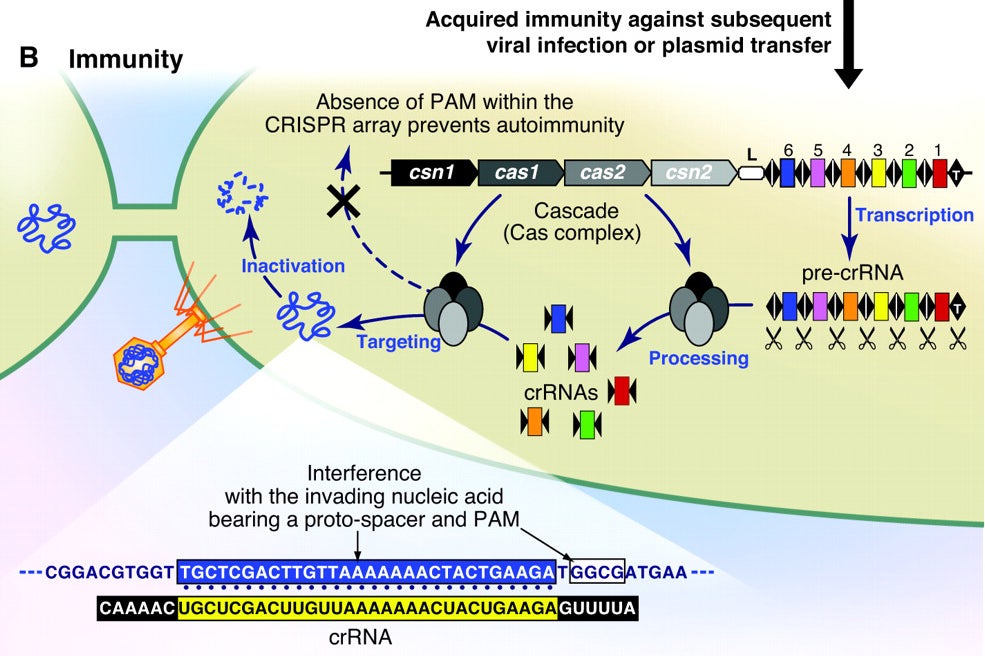 Once the CRISPR-Cas system has the proper spacers between gene elements, the system can recognize and destroy new instances of infection by a known agent.

The process in which that immune system works is pretty complicated, and I won’t get into it here. A brief overview can be seen in the diagrams above.