The Fujifilm Instax Square SQ10 is a digital camera that can crank out Polaroid-style prints. 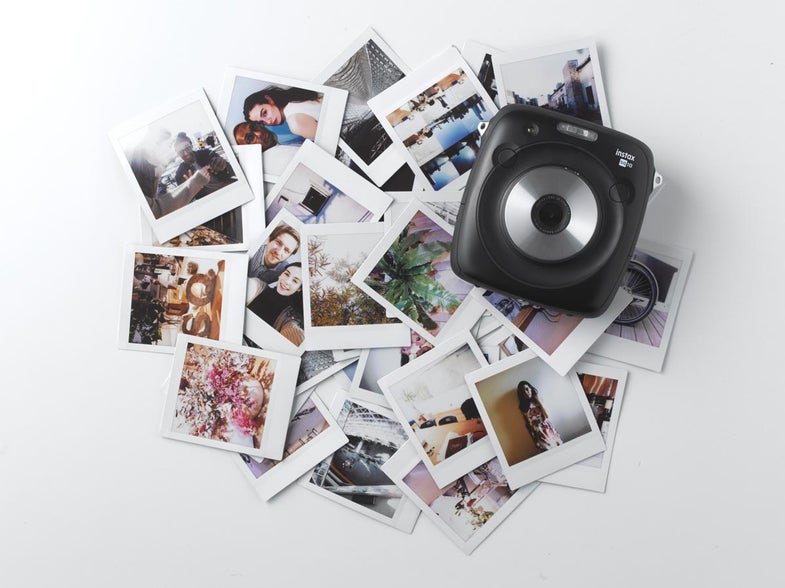 Film photography peaked just around the turn of the 20th century, but right now it’s experiencing a renaissance. Traditional 35mm film has seen a rebound; Fujifilm’s Instax cameras and film now perpetually dominate Amazon’s Best Sellers page in the Cameras & Photography section; you can once again find instant film in just about any big-box store. It’s a market driven by enthusiasts, but embraced by casual users who want quirky wedding moments or just to relive the nostalgia derived from Polaroid-style prints. Now, Fujifilm is expanding its Instax offerings to include an instant digital camera called the Instax Square SQ10 and a new square format film to go with it.

By and large, the Instax Square SQ10 is a digital camera. Its digital sensor image processor are typical of a compact camera. It captures 1920 x 1920 pixel, square JPEG images to built-in memory (which can hold roughly 50 shots) or to an SD card. The back of the camera has a 3-inch LCD display for composing shots, and revising and editing pictures. This is all standard digital camera stuff.

Once a photo is finished, however, the SQ10 can spit out a physical print in its new 2.4-inch square format film. The square shape is important because it evokes the classic Polaroid films for the 600 series and SX70 cameras. Though the old Polaroid images were 3.1-inch squares, the matching aspect ratio is a clear nod to the originator. True story: If you take an Instax camera to a party, it’s almost guaranteed someone will still call it a Polaroid.

While some film purists will likely balk at the idea of dressing up a digital camera with a printer and calling it a hybrid, this isn’t a totally new concept.

Back in 2014, Polaroid introduced the Socialmatic camera. It looked like the old Instagram logo and promised to make a hybrid digital and instant film camera that was both cool and practical. It was neither. The enormous form factor made it awkward to carry (let alone use), and the image quality was on par with a dated smartphone camera. Most importantly, it didn’t capture the feel of a real instant camera. The 2-by-3-inch Zink prints felt more like cheesy stickers you’d get from a photo booth than a real photographic print. The prints also crawled out of the camera like they would a traditional printer. It was a different experience, to put it kindly.

Polaroid’s current hybrid camera model is called the Snap, which suffers many of the same setbacks, which are slightly offset by its $99 price tag. Still, it doesn’t manage to capture the experience of the original Polaroids.

The Fujfiilm SQ10, however, has an inherent advantage in that it uses real instant film that’s developed by a self-contained chemical process. (You can read about how it works here).

There are also some inherent technical benefits in using this kind of digital and film hybrid, the most noticeable of which is the lens. Compared to the Instax Wide 300—one of Fujifilm’s most popular dedicated instant film cameras—the SQ10’s lens lets in about 30 times more light (roughly 5 stops) through its aperture. That makes shooting photos in the dark much simpler, even if you don’t use a flash.

Still, the flash on the SQ10 is actually one of the primary benefits it has over the cheaper Polaroid Snap. The Snap uses a smartphone-style LED lamp for its illumination, whereas the Fujifilm has a true xenon flash, which is common in dedicated cameras from DSLRs to compacts; it’s brighter and also does a much better job of freezing subjects in sharp focus.

The SQ10’s similarity to Fujifilm’s already-existent Instax Printers makes it a little disappointing that it doesn’t have the same connectivity functions. It would be nice to be able to sync up a smartphone and make a print or post shots on social media. Right now, it can only print from the camera’s built-in memory or from a Micro SD card in the expansion slot. Frustratingly, this was actually something you could do with the Socialmatic camera back in 2014.

One of the other big downsides is the price, which is steep at $279—especially when you consider that each Instax Square print will cost more than $1.50 (it comes in packs of 10 for $16.99). But, unlike a typical instant film camera, the printing isn’t required, so you can keep shooting until you’re happy with the photo and continue even if you’re out of film.

Even if the hybrid camera doesn’t achieve the kind of mainstream adoption as the typical film Instax film cameras, the rebirth of the square format film has a lot of potential based purely on its sentimental appeal. Fujifilm hasn’t announced explicit plans for a film-only version to shoot square film, but if it does, it’s hard to imagine it won’t climb its way into Amazon’s Best Sellers page just the same as its siblings.