To save the planet, scientists figured out how to fix cow farts

The secret to climate-friendly cattle. 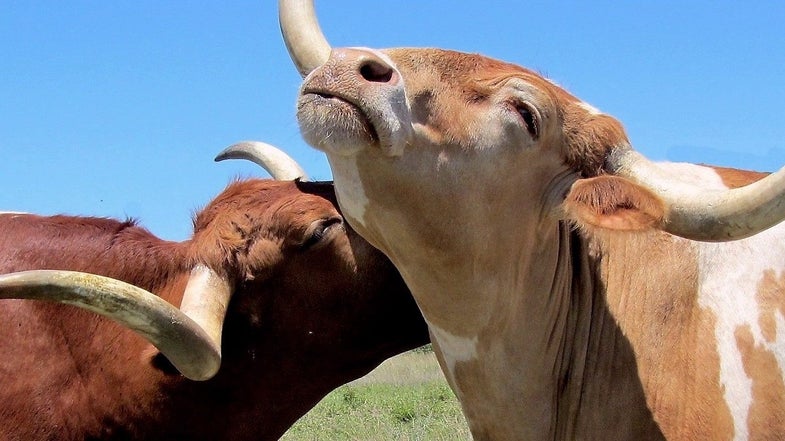 Raising cattle contributes to global warming in a big way. The animals expel large amounts of methane when they burp and fart, a greenhouse gas many times more potent than carbon dioxide. U.S. beef production, in fact, roughly equals the annual emissions of 24 million cars, according to the Union of Concerned Scientists. That’s a lot of methane.

Still, most people probably wouldn’t be inclined to swap their juicy steak for a bowl of beans.

Researchers think there may be a better way. Rather than ask people to give up beef, they are trying to design more climate-friendly cattle. The goal is to breed animals with digestive systems that can create less methane. One approach is to tinker with the microbes that live in the rumen, the main organ in the animals’ digestive tract. These tiny organisms enable fermentation during digestion and produce the methane released by the cattle.

Scientists in the United Kingdom last year found that a cow’s genes influence the makeup of these microbial communities, which include bacteria and also Archaea, the primary producers of methane. This discovery means cattle farmers potentially could selectively breed animals that end up with a lower ratio of Archaea-to-bacteria, thus leading to less methane.

“The methanogens — or Archaea, which produce methane — are totally different from bacteria, so we could determine their abundances in the rumen samples,” said Rainer Roehe, professor of animal genetics at Scotland’s Rural College. Roehe studied the composition of microbes in sample animals and established that the host animals’ genes were responsible for their makeup. “The higher the Archaea-to-bacteria ratio, the larger the amount of methane emissions,” he said.

His study, which appeared in PLOS Genetics, recently won the journal’s prestigious genetics research prize. The journal called the work “the first step toward breeding low-emission cattle, which will become increasingly important in the face of growing global demand for meat.” The research identified specific microbial “profiles,” that is, combinations of microbes, which could help determine which cattle digest their feed more efficiently, and emit less methane.

He predicted the approach not only would reduce the environmental footprint of beef production, but it would also enable farmers to produce meat more cost effectively. It also likely would improve animals’ health and improve the quality of meat, since rumen microbial fermentation enhances the production of omega-3 fatty acids, he said.

He and his colleagues tested 72 animals — eight descendants from each of nine sires — in order to predict the effect of their genes on the microbial community, Roehe explained. “The only common factor of these progenies was its genes inherited from its sire,” he said.

They analyzed the samples and found that inherited genes “influenced significantly methane emissions [and] the Archaea-to-bacteria ratio,” he said. They determined that more than 80 percent of the methane emissions could be explained by the “relative abundance” of 20 genes, he said. Even with different diets and different breeds of cattle, the outcome remained the same. “That means that the animals’ genetics shapes the composition of its own microbial community,” he said.

There also likely are biological factors involved, including salvia production, which influences pH in the rumen — “and thus the living conditions of the rumen microbial community” — the physical size, structural differences and contraction of the rumen, which affects the rate at which digested food passes through the rumen, and even “crosstalk” between rumen microbes and other cells, he said.

In practice, breeders would need rumen samples from many animals to determine their genetic makeup. While the research still is in the experimental stages, Roehe said, “we are working with breeding organizations together to prove the efficiency of the system under practical conditions.”