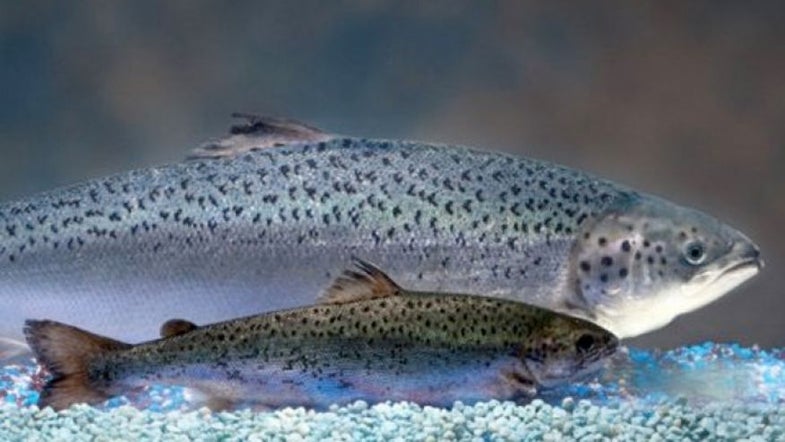 The Food and Drug Administration just approved the AquAdvantage Salmon, a fish genetically engineered to grow more quickly than its conventional counterparts. It’s the first GMO animal for human consumption approved for sale in the United States.

AquaBounty Technology, the company that made the fish, has been trying to get it through approval for nearly two decades. The fish is an Atlantic salmon which has been genetically altered to include genes from other fish, including a growth hormone gene and the promoter of an antifreeze gene. (The company is a subsidiary of Intrexon. It also owns Oxitec, which is working on disease-fighting GMO mosquitoes, as well as Okanagan Specialty Fruits, which made the new non-browning GMO apple.)

The AquAdvantage fish will be grown on land in aquaculture systems. There has been some concern about whether the fish, should it escape, will harm ecosystems, although AquaBounty says it’s unlikely the fish could escape to the wild at all.

In a statement released this morning by AquaBounty, CEO Ron Stotish said: “AquAdvantage Salmon is a game-changer that brings healthy and nutritious food to consumers in an environmentally responsible manner without damaging the ocean and other marine habitats. Using land-based aquaculture systems, this rich source of protein and other nutrients can be farmed close to major consumer markets in a more sustainable manner.”

Whether consumers will accept the fish is unclear. While AquaBounty promotes the fish as an environmentally-friendly alternative to wild caught salmon, the anti-GMO group Friends of the Earth says it has rallied dozens of companies—mostly health food stores, as well as larger outlets such as Kroger and Target—to promise not to sell the fish.

CORRECTION: An earlier version of this story called the AquAdvantage Salmon the first GMO animal approved for sale in the US. It is actually the first approved for human consumption.