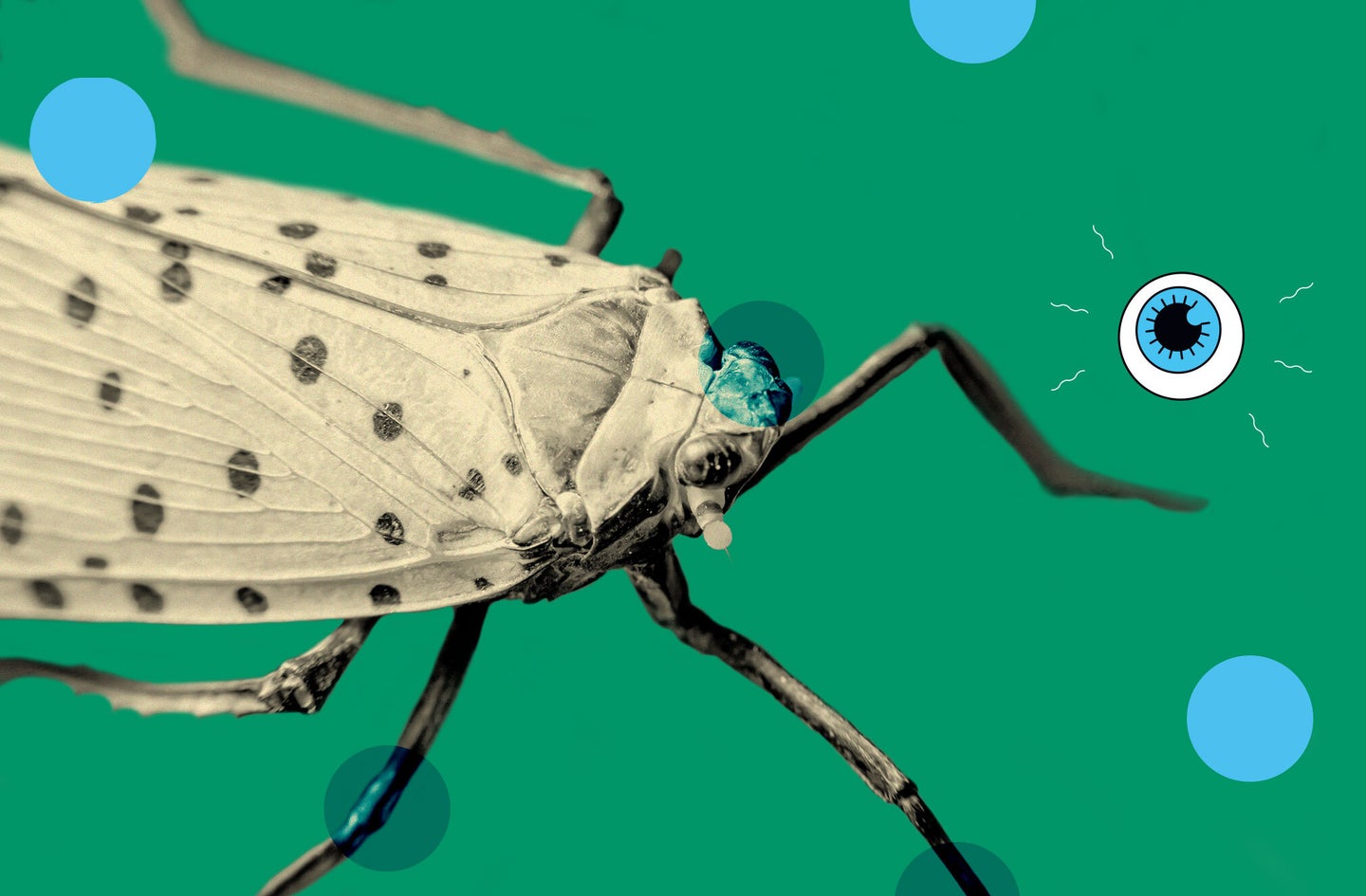 Even if you love slurping down a cup of hot tea just full of the stuff, you might not really know what honey is. Bees often make this sweet goop out of nectar from flowers, but any super-sugary liquid will do in a pinch. In 2012, for example, some French bees got into a candy factory’s waste vats and produced blue and green honey from the sticky syrup.

And sometimes, if we’re very lucky, bees will make honey using the waste emissions of other insects—including the invasive spotted lanternfly.

The spotted lanternfly, which is a heartbreakingly beautiful and absolutely ecologically devastating little leaf-hopper native to China, was first seen in Pennsylvania in September of 2014. They feed on dozens of species of plants, including food crops, and can cause a lot of damage. In addition to all the nibbling, they also secrete a sticky waste—basically poop or pee—called honeydew, which tends to attract molds that kill the affected plants. Far from being picky eaters, bees have been known to sup on this sweet stuff and produce honey from it (the resulting product is also, confusingly, called honeydew).

FACT: Super-heated falcon poop can help explain the origins of rocks and life on Earth.

In 2016 on Mt. Rasvumchorr in Russia, researchers discovered naturally occurring deposits of a substance known as Tinnunculite. The compound is a pale, carbon-based mineral that comes in a variety of colors. It’s also the byproduct of birds pooping near burning coal. When falcon feces reacts with hot gasses, it turns from biodegradable to solid-as-a-rock. And this relatively recent entry to the official list of minerals is also a wild example of how minerals and life co-evolved on Earth.

When you think of evolution, maybe you think of natural selection, Galapagos finches, Darwin, or DNA. But according to mineralogist Robert Hazen, rocks evolve too. Hazen’s hypothesis of “mineral evolution” posits that we have as many living things on earth as we do, in part, because of the presence of minerals. And, that we have so many different minerals because of living things.

For an example that goes beyond guano, there’s “The Great Oxygenation Event.” Before there was life, our atmosphere had no oxygen in it. Oxygen molecules are key to a whole suite of chemical reactions, and without it, not much was happening in the mineral record. But suddenly, microscopic organisms called cyanobacteria emerged, multiplied, photosynthesized, and produced enough oxygen gas to create thousands of new minerals. There are lots and lots of ways (big and small) that living things and rocks are altering each other’s environments and determining each other’s future. In Hazen’s own words, “we need to understand minerals to give us the story of our planet.”

FACT: A doctor tried to cure gluten intolerance with ONLY bananas

Avid listeners of the show might remember that I have celiac disease, which depending on who you’re talking to is either a legit reason not to eat gluten or “just a fad.” I know a lot about the disease both through having it and through writing about it for PopSci, but even I didn’t know about this week’s fact until really recently.
Banana babies are not, despite what Google says, tiny frozen bananas covered in chocolate (though they look delicious). They’re babies and small children who were fed a diet chock full of bananas in an effort to cure them of celiac. Did it work? No. You don’t have to listen to the episode to figure that out. But is it a wild tale anyway? Absolutely.

In August, Atlas Obscura reported that Philadelphia beekeepers had harvested the sticky results of this bee-and-lanternfly collab. Check out their story for more on the accidental discovery of an intriguing new type of honey, and listen to this week’s episode of Weirdest Thing to learn more about how bees can go on misadventures that lead to toxic, spicy, and even hallucinogenic honey.