And that's the problem 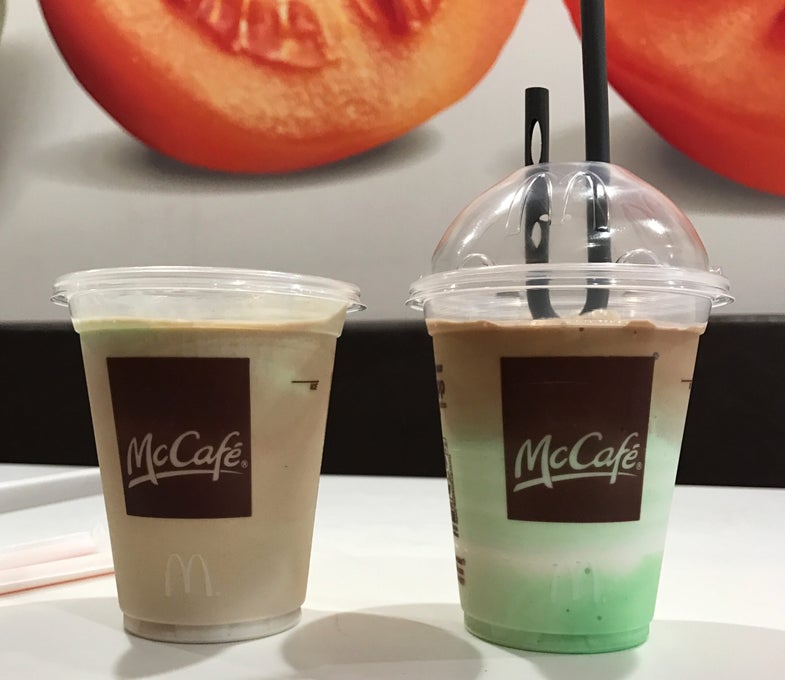 The phrase “reinventing the wheel” usually means someone is wasting time and effort trying to fix something that isn’t broken. The same could be said for reinventing straws, which is something that McDonald’s has half-jokingly tried to do with its new STRAW (Suction Tube for Reverse Axial Withdrawal).

On February 24, the fast food corporation will be giving out 2,000 J-shaped, holey straws in select locations across the country, and they’re only good for one thing:

“This straw has no purpose other than allowing you to drink a milkshake that has two distinctive layers,” says fluid dynamicist Nicole Sharp. She runs a blog called F**k Yeah Fluid Dynamics that highlights awesome examples of flowing fluids in the world around us, so we reached out to her to get her thoughts on the new straw design.

“Me and my friend that I’m staying with—an MIT professor—we watched the McDonalds’ video laughed a lot,” she says.

And that is mostly the point, it seems. A McDonald’s press release admits it’s an “utterly frivolous reinvention” designed for the new milkshake they’re touting—a two-layered chocolate and mint concoction.

Still, many of us here at Popular Science are recovering scientists, so Commerce Editor Billy Cadden and I decided to test it out.

Why not use a straight straw?

Let’s be clear about something: if you want customers to be able to taste two flavors at once, the most practical thing to do would be to blend the two flavors together. But if that results in an ugly green-brown color—or if you want to make a splash in the media—another option is to stack the two flavors in layers. Très chic!

Now, a regular, boring old straw with just one measly hole at the end will not allow you to taste both of those layers at once. So what’s a brand to do? Call in some rocket scientists and robotic engineers to design a new type of eating utensil that will mix the two flavors together as the person drinks. (Because, again, stirring things with spoons is just too straightforward.)

The rocket scientists probably knew that a straight straw with two holes in it wouldn’t work very well. If you’ve ever tried to use a straw with a hole in it, you know why, says Sharp. “It works fine until the top hole is exposed—then all you get is air.”

The genius of the J-shaped design is that the hole nearest the mouth of the straw sits at the very bottom of the cup, so it should always be pulling from the delicious bottom layer of the milkshake. Meanwhile, holes punched along the shorter arm simultaneously draw from the top layer, allowing you to drink two flavors at once without sucking in a bunch of air. Theoretically.

Plus, the longer J-shaped straw provides more distance for the flavor to mix over, says Sharp.

The iPhone of straws

The employees at our local McDonald’s gathered around to admire our straw. I don’t know about Billy, but I felt pretty fly sliding it out of its box as if I were unveiling the new iPhone, to the admiration and curiosity of the crowd.

We asked our cashier to make two milkshakes: one with the chocolate and mint layered, to test out the J-shaped straw, and one where the chocolate and mint were blended together with a spoon—we sampled that one with an old-fashioned straight straw. We wanted to see whether there was any point to the layered milkshake (and therefore the straw). We suspected that there was not.

Billy, who is slightly less lactose intolerant than I am, was the lab rat. Here is our scientific report:

First, the test subject started with the layered milkshake, which had mint on the bottom and chocolate on the top. First reaction: “It’s good.” Second reaction: “It’s a lot mintier than I was expecting. I don’t know if the top hole [positioned in the chocolate later] is working as well as the bottom hole [in the mint layer].”

The subject reported tasting about 80 percent mint, 20 percent chocolate in those first few sips. That’s a far cry from the 50/50 ratio that Micky D’s was aiming for. For customers who like mint, this may be desirable. However, our test subject preferred the blended milkshake, which was more like 40 percent mint and 60 percent chocolate.

Over time, as the layered milkshake began to melt and mix together, it began to taste similar to the blended milkshake.

From the beginning of the test, the J-shaped straw was “a lot harder to drink from,” our test subject reported. “More sucking power is needed.” This may have been because the J-shaped straw is longer, which meant the milkshake made more contact with the straw walls, which would increase friction, according to Sharp.

Things started to go downhill rather quickly as the milkshake level went below the first set of holes cut into the side of the straw’s shorter arm. When the test subject attempted to drink more, the straw made a hollow slurping sound as if he were trying to suck up the last dregs of a milkshake, despite the fact that approximately half of the milkshake remained in the cup.

After allowing the milkshake to melt a little, the test subject tried again, but to no avail. Eventually, he gave up and used a regular straight straw to finish the milkshake, and the experiment ended.

Why didn’t it work?

You’d think that because the hole closest to the mouth of the straw is buried in milkshake, you could still get a mouthful of sugar even after the holes on the short end of the straw are exposed to air. But something else is clearly going on. Sharp has a hypothesis as to why the STRAW crapped out on us, but she cautions that she hasn’t tested it yet.

If it worked properly, the J-shaped straw would allow you to determine the optimal flavor ratio for your layered milkshake. Like more mint? Move the straw more into the minty layer. Or the flavor of your milkshake could evolve as you depleted one layer more than the other.

In practice, though, the straw did not achieve an even mixing of flavors, and it stopped working about two-thirds of the way through the milkshake. Our experiment, did, however, only have a sample size of one. More research, and more milkshakes, are needed to determine the validity of this design.