Debunked as a tool for psychoanalysis, Rorschach inkblots might still harbor some secrets 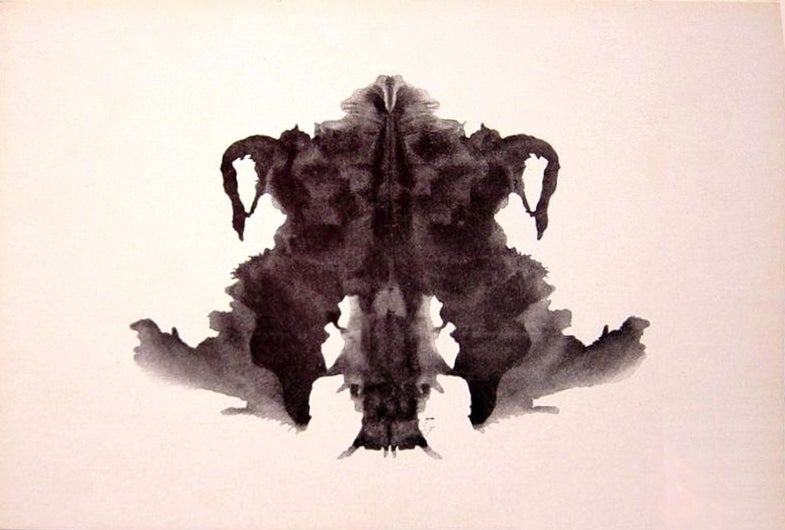 In China, the famed man in the moon is a bunny. Confused? So, it seems, are our eyes, according to a new study in the journal PLOS ONE. The study looks at why people see so many different images when we stare at Rorschach inkblots.

Since their inception, Rorschach ink blots—named after Hermann Rorschach, the Swiss psychoanalyst who invented them—have been known to confuse the visual cortex. We tend to see what we want to see in them. And although their use in psychology has been debunked (whether you see a butterfly or a dancing clown in the above image is not a reliable indication of your mental state) why we see different things at all remains a puzzle.

The idea for the new study came about because physicist Richard Taylor is developing bionic eyes to cure blindness in people who have had diseases of the retina. “In order to do that,” said Taylor, “we have to understand what normal vision is doing.”

To understand why Rorschach inkblots have this enigmatic effect, Taylor and his team at the University of Oregon took lots of blots and analyzed them to see if they were fractals. Fractals are patterns that repeat themselves across different scales.

Taylor suspected the blocks might be fractals because of the way in which Rorschach initially produced them—by smearing ink on the top of a sheet of paper, folding the paper in half and pushing down hard on it so that the ink would penetrate the fibers.

Once he confirmed that they were fractals, he ran a test that enabled him to quantify how complicated the fractal patterns were—1 is a not-very-complex fractal and 2 is highly complex. He did this because his team had a wealth of historic data from when Rorschach tests were used to as a psychological exam—they could compare the fractal complexity of a Rorschach blot with the number of images people tended to see in them. What they found was that the more fractal complexity an image had, the fewer images people claimed to spot.

Why does this matter?

Because fractals are all over nature: trees, coastlines, clouds—are all fractal.

So, when a Rorschach blot has a simple fractal pattern, it could in theory look like a lot of different things that we see in the natural world. As the image gets increasingly complex, the number of things it might resemble goes down. But what’s puzzling is the fact that our brain does this at all.

“A lot of our research focuses on what we call fractal fluency,” said Taylor. Over time our visual system—our eyes and brains—has adapted the ability to identify things in an image that is incredibly fractal rich. Think seashells, Romanesco broccoli, ferns, leaves, lightning, snowflakes, and waterfalls. In fact, studies have shown that when you look at nature’s fractals, your stress levels go down.

“Given that we have this intimate relationship with nature’s fractals and we can easily process them, it’s kind of strange that these fractals are fooling the visual system,” said Taylor. “if you’re looking at a fractal forest the last thing you want to do is see a tiger that is not there.”

The electronic chips in Taylor’s bionic eyes don’t take in as much visual information as our natural eyes do, so misinformation is a real concern.

“I’m really interested from that point of view. Why is our natural eye getting fooled by this? We have lots of visual information, so quickly you can look up at that cloud and say, oh I understand that dog is not really there in that cloud. If you have a bionic eye, the bionic eye is struggling to see if that thing is a cloud in the first place.”

As for the man in the moon—why do Americans tend to see a man while people in China see a bunny? The scattering of craters are fractals that evoke similar responses to the ink blots. We see what our eyes think is closest to that pattern filtered through the lens of experience and culture. One could consider the moon to be the original Rorschach test.