America’s Most Futuristic Warship Is Boldly Going Out To Sea 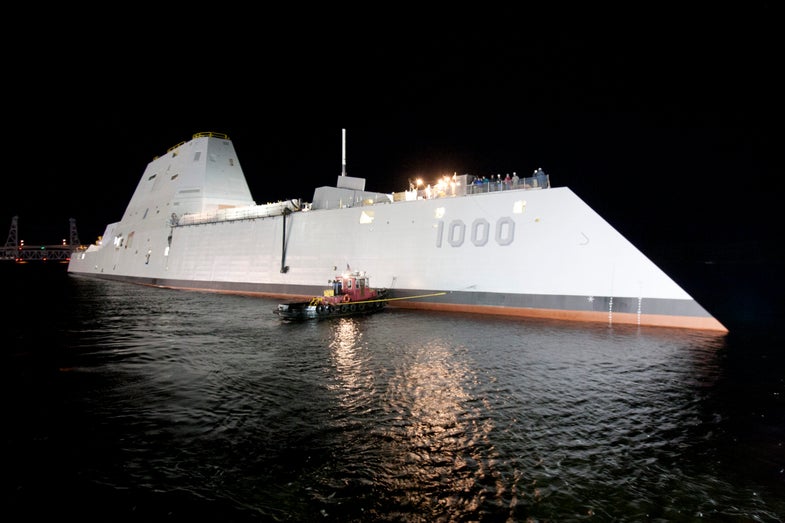 The very shape of future American warships is in the hands of none other than Captain James Kirk. In development for years, the USS Zumwalt looks as much like a spaceship as an ocean-going vessel, with sharp angular sides and a body that looks upside down. The commanding officer does indeed share a name with fictional Star Trek captain James Kirk. No naval vessel is really complete without first proving that it can survive on the open seas, and now it’s headed out for sea trials.

“We are absolutely fired up to see Zumwalt get underway,” said Kirk, according to the Tampa Bay Times, “For the crew and all those involved in designing, building, and readying this fantastic ship, this is a huge milestone.”

The Zumwalt is a strange ship. Classified as a destroyer, it’s built to escort larger ships and protect them from small, deadly threats. The U.S. Navy currently has 62 Arleigh Burke class destroyers, with thirteen more in the works. The Zumwalt is the first of a three-ship trial program to see if the next generation of destroyers can improve on the original series. To get there, the Zumwalt is taking a radical approach: With enough automation to cut the crew size down from the Burke’s crew of over 250 to just 154 sailors and officers on board. Additionally, the Zumwalt will generate so much power on board it can easily fire laser weapons or rail guns, once the Navy develops them.

If it works, the Navy will have a new class of ship, deadly enough to bombard inland targets or other enemies with powerful guns, small and stealth enough to avoid counter attacks, and crewed lightly enough to keep labor costs down (not everything about future warship design is exciting). But there’s a chance it won’t work at all. The Zumwalt’s weird body is what’s known as a “tumblehome” design, and while it’s great for stealth, it could pose some problems on the high seas.

With the problems known, hopefully the Navy and the shipbuilders have solved the problem of tumblehome ships surviving on the open water. If not, the ship may sadly go where countless boats have gone before.

This post originally misstated the name of the Arleigh Burke class destroyers. It has since been corrected.