Synthetic gas. Biomass. Are any of these new ideas achievable? 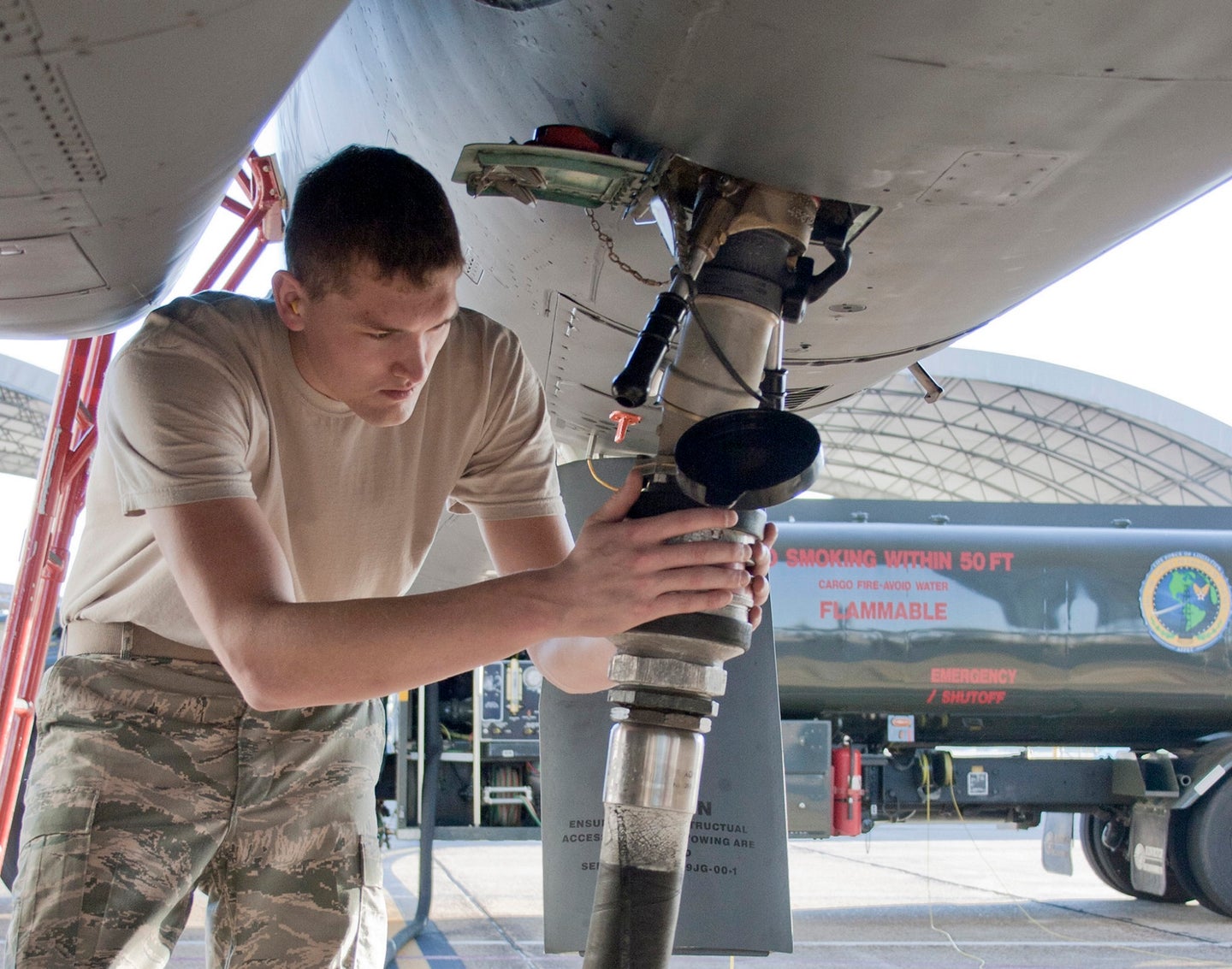 This story originally featured on Task & Purpose as part of What’s Next In War, a special issue breaking down what’s on the horizon for the US military.

If you’ve ever grimaced watching the gas meter run up while filling your 12-gallon car, keep in mind that the Air Force runs through approximately two billion gallons of gas every year, at the cost of about $7 billion.

It costs more than just dollars to keep the Air Force’s 5,625 aircraft aloft. For every fighter jet flying over the Middle East or the western Pacific, there’s a long, vulnerable supply chain that often stretches all the way back into foreign oil wells, a dependency that the Pentagon is eager to shake.

“Transporting fuel—whether by air, land or sea— is a necessary risk. But the more we use, the more of a risk it becomes,” wrote Roberto Guerrero, the deputy assistant secretary of the Air Force for operational energy in a 2019 op-ed. “If we face external constraints like oil shortages, adversary attacks or interrupted access, our vulnerabilities become even greater.”

With those worries in mind, the Air Force is chasing a slew of new technologies to reduce its dependence on foreign oil, to make its engines more efficient and use less gas, and to make it easier to keep bases and aircraft gassed up downrange. Those technologies include designing better engines, analyzing jet fuel use, and even washing down engines differently so that they run better. But there is one technology that could have dramatic implications not just for the Air Force but for society in general: renewable jet fuel.

The Air Force currently uses Jet Propellant-8 (JP-8), a colorless, kerosene-based fuel rich in hydrocarbons that were baked into it by millions of years of high pressure and high temperature acting on dead plants and algae. Those long chains of hydrocarbons are what make jet fuel so potent, but the Air Force wants to whip them up a few million years faster than nature can. That’s why last October, the service announced it had endorsed a private company called Twelve, which is working to pull carbon dioxide out of the air and transform it into jet fuel.

“What if you could access fuel from anywhere on the planet, at any time, no tanker required?” the service wrote in a press release. “The Air Force thinks it’s possible with ground-breaking carbon transformation technology.”

Twelve says it has a new electrochemical reactor with a special catalyst that electrifies carbon dioxide and water, which creates a synthesis gas (a.k.a. syngas) that can then be refined into jet fuel, which the company calls E-Jet. That may sound like science fiction, but the process of turning syngas into fuel is actually nearly a century old. German inventors Franz Fischer and Hans Tropsch developed the Fischer-Tropsch process for doing so in the 1920s, and the Air Force successfuly tried using it to supplement fuel for heavy bombers and transport jets in the early 2000s. However the service discontinued the project in 2013, partly because the fuels were not yet cost-competitive, according to Inside Defense.

The Air Force hopes E-Jet could push the concept further by allowing airmen to produce the syngas down range and refine it into jet fuel, eliminating the need for vulnerable supply chains.

“Twelve’s carbon transformation platform could allow deployed units to create fuel on demand, without the need for highly skilled fuel experts on site,” The Air Force wrote in its press release last year.

E-Jet would also be renewable, since it would require just carbon dioxide from the air and water, the Air Force wrote. It sounds amazing, but two propulsion experts were skeptical. After all, there simply is not that much carbon in the air, explained Jay Gore, the Reilly Chair Professor of Combustion Engineering at Purdue University’s School of Mechanical Engineering.

The concentration of carbon dioxide in Earth’s atmosphere is nearly 412 parts per million, according to NASA. While that’s enough to retain heat from the sun and drive global climate change, it’s still a very thin amount if you are trying to make a hydrocarbon-rich substance like jet fuel.

“It’s a big haystack and we know there is a needle, but the probability of finding that needle will require a lot of effort, a lot of work,” Gore explained.

And it would require a lot of air. Vikram Mittal, an engineering professor at West Point, estimated that it would take 13,000 cubic meters of air to make just one gallon of jet fuel, and about 100 million cubic meters of air (about the volume of the Empire State Building) to fill up the tank of a C-130 Hercules transport plane. There is a lot of air in the atmosphere to draw from, but the more air you draw, the greater chance that pollutants in the air “can damage the sensitive catalyst materials that extract the carbon dioxide,” Mittal wrote for Forbes in November.

Even if you could get enough unpolluted air into your reactor, there’s another big problem: generating enough energy to pull the carbon dioxide out of the air. Mittal estimated that it would take a solar array about the size of 38 football fields to generate enough fuel to fill a C-130, though it would likely have to be bigger as energy is lost in the conversion process. While the military is experimenting with mobile nuclear reactors that could provide tremendous amounts of power to forward bases, it still might not be enough to pull jet fuel out of the air.

“Unfortunately, even one of these nuclear reactors running constantly for 24 hours would only be able to produce half the fuel necessary to fill a C-130,” the professor wrote.

Even the Air Force admitted there were questions left to answer about E-Jet, particularly how to power the process in remote areas. How Twelve and the Air Force hope to tackle those challenges is unclear, as neither organization was able to comment by deadline. But Twelve’s technology has shown promise in the past.

Frederick Baddour, a senior scientist at the Catalytic Carbon Transformation & Scale-Up Center at the National Renewable Energy Laboratory, said the company’s carbon dioxide electrolysis system, which converts carbon dioxide into syngas, demonstrated a high and efficient conversion rate. The company has also partnered with organizations like Mercedes-Benz, Proctor & Gamble and NASA, which want to use Twelve’s carbon transformation technology to reduce emissions by making products and fuels that are normally made from petroleum.

Twelve has demonstrated in the past its capability to make syngas out of carbon dioxide and the October press release from the Air Force seems to highlight Twelve’s ability to turn that syngas into jet fuel. “What they’re showing is closing the loop: not just converting CO2 into syngas but that the syngas can be refined downstream into a certifiable jet fuel,” Baddour said. Based on Twelve’s past success, the project seems very feasible, he added.

It could be even more feasible when the process draws in carbon-rich sources to feed the electrolysis system. For example, if the air feeding into Twelve’s system comes from right outside a bioethanol plant, there will be oodles more carbon dioxide in the air that the system could draw from, Baddour explained.

In its October press release, the Air Force said Twelve had successfully produced jet fuel from CO2 in small quantities and that December would mark the end of a project producing larger quantities of the fuel. The Air Force also said there would be a report on the company’s findings, but that report was not immediately available. Regardless, “the team sees this is a positive first step in a truly innovative program,” the service wrote.

In the meantime, there are plenty of other alternative fuels the Air Force is looking into. One of the most promising is biomass, where organic material from plants and animals is treated under high temperatures and pressures to create jet fuel. In 2018, the Defense Logistics Agency wrote about how the University of Maine was turning recycled paper and cardboard into jet fuel, and they were awaiting certification to be used for aviation purposes.

“These fuels can be generated from a range of sources including waste oils and agricultural products, both of which are readily available around the globe,” Mittal wrote in his op-ed.

Gore, the Purdue professor, said the Department of Energy is also trying to use a concept called exergy, which Stanford University defines as “the useful portion of energy that allows us to do work and perform energy services.” Examples of utilizing exergy include using the exhaust gases coming out of a power plant, or making fuel out of the carbon dioxide-rich air put out by a combustion engine.

“How do we claim some of that energy back so that the yields from fuels are more efficient?” Gore asked.

If anything, the carbon dioxide-thick exhaust streams from automobiles or airplanes could provide much better fodder for Twelve’s E-Jet reactor than other, cleaner chunks of air, he reasoned.

Whether the Air Force’s next tank of jet fuel comes from used cardboard, food waste, a truck tailpipe or the air around us is still unclear. But no matter what, whatever’s next in fuel will have a big impact on the rest of what’s next in war.

“History has taught us that our logistics supply chains are one of the first things the enemy attacks,” Guerrero, the deputy assistant secretary of the Air Force for operational energy, said in October. “As peer-adversaries pose more and more of a threat, what we do to reduce our fuel and logistics demand will be critical to avoid risk and win any potential war.”